Okay so some “Wow… Did not see that coming” is in order. I think a big part of what made this episode so powerful was that it was an unexpected ending. There weren’t many confirmed episode counts I could find on the series, and thus I assumed that there was a lot of stuff left to be focused on, giving the past episode. The fact that episode 11 wrapped up everything, and did it in such a complete way, makes it one of the best episodes of the series.

This episode featured the payoff in terms of characters. It also makes it pretty clear what the series has been about all along. Its been about forgiving yourself for the mistakes you make in the past, and growing through the tragedies and living on. Living on and striving to move on forward, is the key subject matter of Ano Hi Mita Hana no Namae Bokutachi Mada Shiranai, and its quite a beautiful concept to portray.

This episode was filled with emotional moments that could easily be called Tear jerkers. First of all, we finally got to know what all the characters had been hiding inside themselves. Much to my surprise, each character had been hiding a lot more than I expected, and their pain, anguish and depression was very well grounded.

Lets go in order. Anjou, had been jealous of Menma, but not only that, She and Yukiatsu and Poppo had planned to find out how Jintan felt about Menma. She was jealous of Menma, and blamed herself for being selfish for wanting Menma to pass on. Yukiatsu also admitted that he hated only Jintan having Menma to himself. And then, the two real shockers. Tsuruko’s past about telling Menma about the whole plan of the other three, and then hearing Menma’s reply. Added to that, she had an extreme inferiority complex to not just Menma, but to Anjou as well.

And of course, poor Poppo actually had to witness Menma’s death while being powerless to help her. These revelations and then Jintan’s own confirmation that he was happy to be alone with Menma, were golden character moments. This was the time where all the characters understood themselves, saw their mistakes and worked towards redeeming themselves. I think what really made this scene hit home was the fact that it was so… realistic. This is definitely how you’d see anyone who’s been hiding something huge in the core of their personality let their deepest painful secrets slip out; in a tearfilled outburst.

Of course, the emotional moments didn’t end there. As Jintan vowed to go back and get Menma, Menma actually began to fade away and die again. It turned out that Menma’s actual wish was  a result of a promise to Jintan’s mother, the wish to make him cry and stop acting brave. It was definitely a very powerful moment, and showed just how selfless Menma was. Now, I’ll take this opportunity to talk at length about Menma. Menma is often accused by many (from what I have read) as having a very shallow personality or back story. 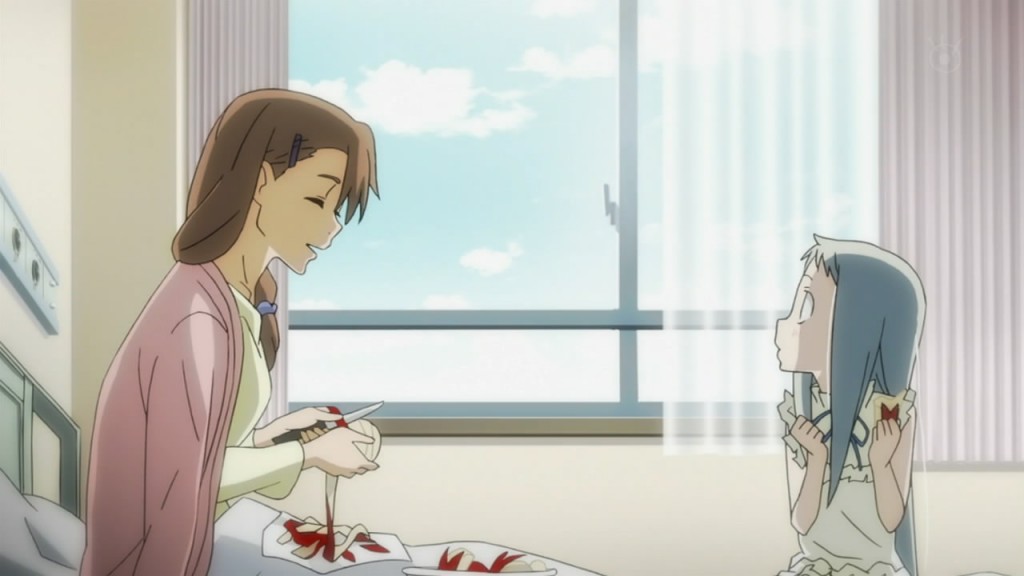 I disagree with this, obviously, and I’ll prove how. Menma is actually not a very smart girl. She’s a nice, well meaning and easily influenced girl. A very realistic and grounded character, and the sort that you’ll find among maany children. Menma has that innocence that only young children can have, and she’s the incorruptable, pure being that many people seem to lose when they grow older. I think her character setup some nice contrast between the child and adult, wherein Jintan and the rest had clearly grown older and developed more complex issues.

But I digresss, Menma was about to fade away, and Jintan refused to have it. As much as I’ve harped over Jintan for not getting over Menma, I liked the way he resolved it all. He needed to say goodbye, he needed to admit he loved her, and he needed to have everyone else wash away their problems of Menma. In every sense of the word, Jintan was a leader and directed everyone, including Menma, to a nice resolution. Had Menma simply vanished after seeing her wish granted, she wouldn’t have been eternally at peace. There was unfinished business for her too, and Jintan saw to it that everything happened correctly. 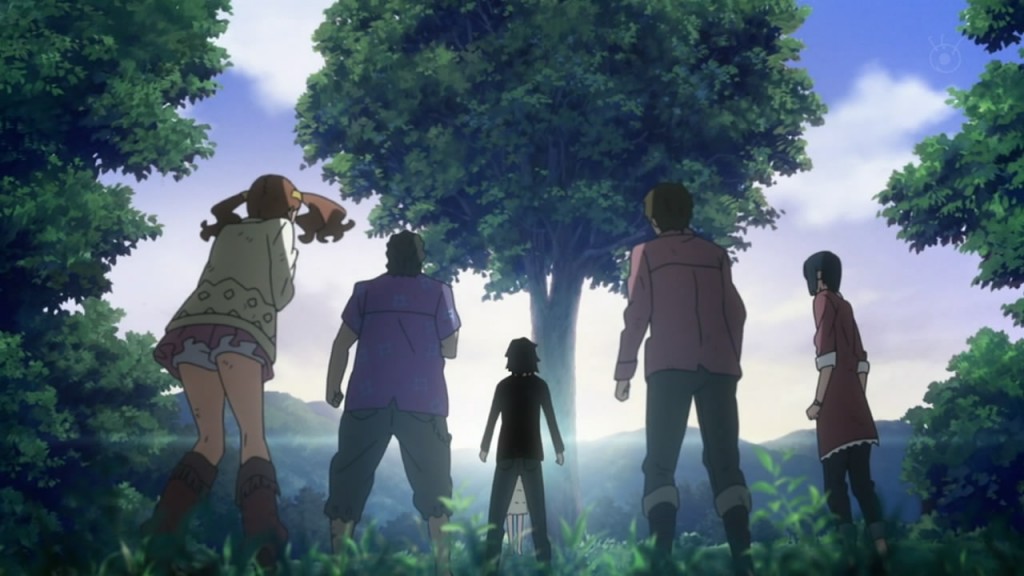 The final moment, with everyone being able to see Menma, was beautiful. The last few moments, especially when they all said good bye and the part where Menma still wanted to stay with them, touched me greatly. I shed my obligatory tear at such an impressive finish. The series had done it here! It ended the whole issue of Menma’s death, the day of her death, the promise and why everyone couldn’t see her until the end.

Of course, it was that extra bit of distance that the story went to, to show what happened after that really put that satisfiying finish: 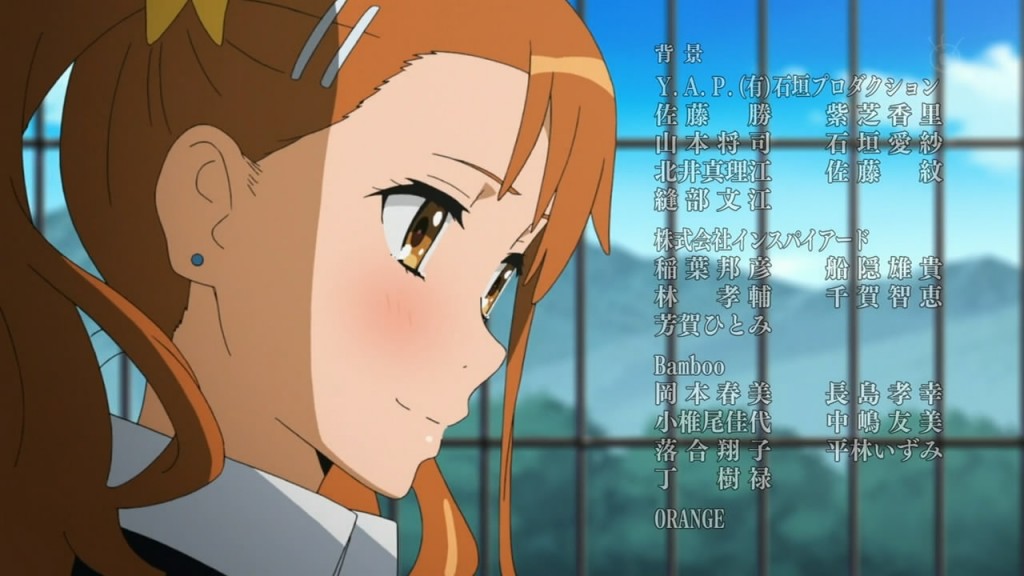 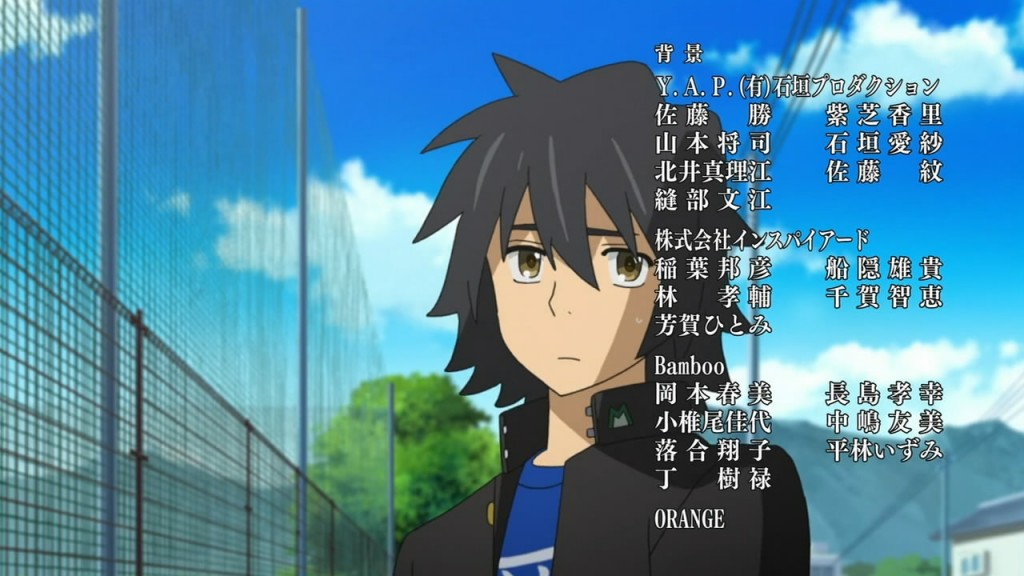 Anjou and Jintan possibly moving forward togehter? HELL YES! We got a nice little snippet of Anjou and Jintan together, and that’s really all I needed to see. We got another scene of: 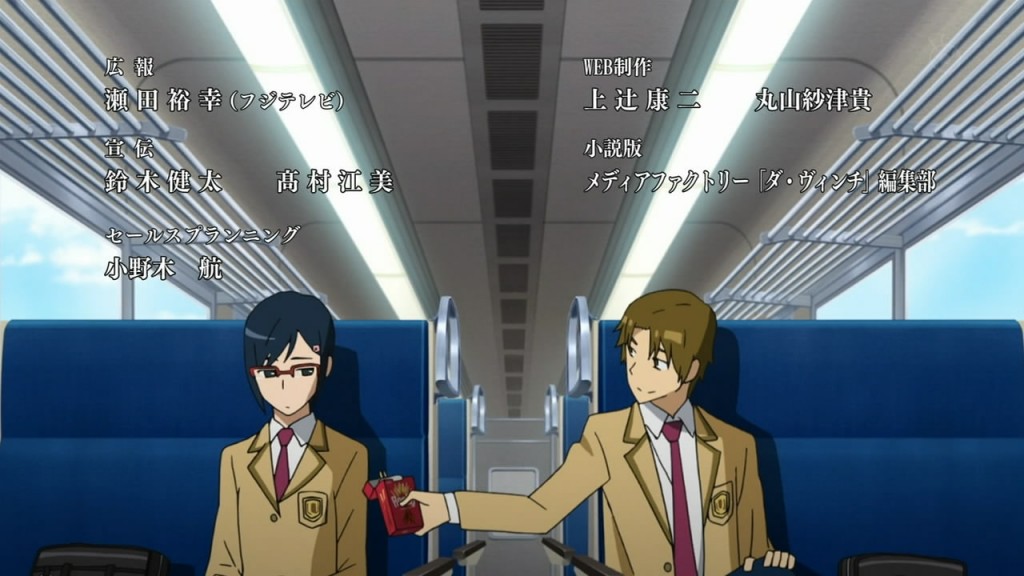 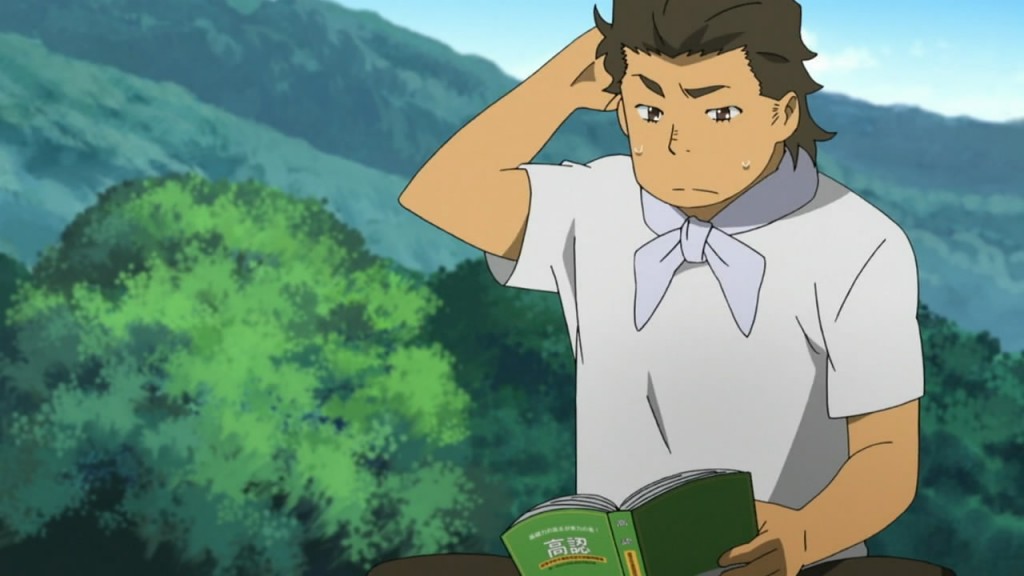 Tsuruko and Yukiatsu getting along just fine as well. Again, it wasn’t anything as huge as a kiss or marriage or anything like that, but it was nice to see things progressing forward. Even Poppo managed to move on and was studying to get an education again. To seal the deal, we had a nice narration of Jintan talking about the promise  to move on, and even adding in the obligatory flower referrence, obviously from the title.

My overall impressions of the series I save for the review, but I do think that much like the start of the series, the ending is very strong. A stroong, nice and complete finish. I really wish more Anime series did tthis, where they focused on the story, messed with our emotions in the middle, and then finished everything off nicely.

If anything, I really enjoyed Ano Hi Mita Hana no Namae Bokutachi Mada Shirani this season, and the final episode did, importantly, not disappoint.

No Preview since its the last episode. Look forward to the full series review soon!