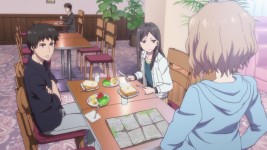 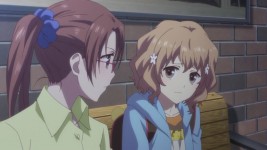 After last week’s drama-filled episode, I wasn’t exactly sure how things would turn out for everyone, especially Ohana and Ko.  Although things didn’t turn out quite how I was expecting, it was definitely drama filled.  The episode starts off with Tohru waking up in the hotel room that he got for himself, Minko and Ohana around 2am and realizing that Ohana isn’t sleeping.  So he ventures into the sitting area of their hotel room and sees her sitting on the couch.  He asks her if she can’t sleep and she nods, but then tells Tohru that he can take her spot in the bed before blushing a bit and rambling about how that would mean that Tohru would be sleeping in the same bed as Minko.  Tohru ignores Ohana’s rambling and mutters something about how he could probably sleep a bit better on the couch than in a chair.  Ohana suddenly asks Tohru is he has a girlfriend, which catches him off-guard and causes him to blush and stutter a bit in a very adorable way before admitting that he doesn’t have a girlfriend at the moment.  Ohana nods and says that it makes sense considering how he has absolutely no social skills around girls.  This irritates Tohru and he turns the tables on Ohana and asks her about her “boyfriend” Ko.  This causes Ohana to stutter and flush (just like Tohru did) before jumping to her feet and saying that he’s not her boyfriend and there’s nothing special going on between them.  Tohru chuckles and says that she talks a lot and although she’s saying one thing, her facial expression is saying something completely different.  Ohana stares at him for a second before hastily saying that she’s going to bed and storming out of the room.  Neither of them notice Minko standing just outside the doorway listening in on their conversation and looking a bit dejected.

The next morning as Minko and Tohru are eating breakfast, Ohana slams down a map on the table and declares that they are going to be kidnapping her mother and dragging her to the inn.  At first Minko and Tohru are confused and a bit surprised, but Ohana explains that because her mother was the one that gave them such horrible reviews and she’s being stubborn, the only way to prove that the inn is better than she said in the magazine is to kidnap her.  After a moment’s pause, Tohru agrees (surprising Minko) and says that if Ohana wants their help to kidnap her mother, she’ll need to bring Ko along as well.  Ohana is speechless about this condition, but reluctantly agrees to it.  Tohru nods and then declares that in the meantime, he and Minko will be sight-seeing in Tokyo and paying special attention to the famous restaurants in the city to get ideas to bring back to the inn.  Minko is delighted that she gets to spend the whole day with Tohru, but once they’re in the van and on their way to their first destination, she becomes embarrassed and mentally realizes that with just the two of them, it feels more like a date than anything else.  Meanwhile, Ohana is desperately trying to call Ko, but can’t seem to get through to him.  She decides to stop by the bookstore he works at, but finds that he’s not there and is about to leave with the megane-chick who confessed to Ko shows up behind Ohana and surprises her.  The two sit down for a talk, but unfortunately for Ohana, it doesn’t seem like it’s going to be a pleasant conversation. 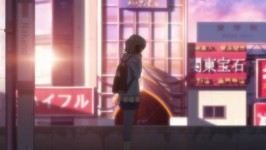 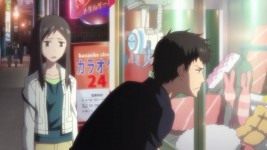 The megane-chick (I don’t remember what her name is and to be honest, I don’t really care) basically tells Ohana that she needs to let Ko’s heart go so that he can move on.  She goes on to say that the bench the two of them are sitting on is the exact place that she confessed to Ko.  In a small flashback, we find out that the girl confessed to Ko but Ko turned her down by saying that he likes someone else.  When the girl asks him if he’s dating this other girl, he smiles wryly and says no because the girl is deferring her answer until a later time.  This has apparently upset megane-chick so much that she shouts at Ohana, telling her that it’s not fair for her to make a nest in Ko’s heart and then sit there without doing anything.  She then asks Ohana if she likes Ko in a romantic way or just as a human being.  This surprised Ohana and she’s not entirely sure how to answer.  She starts saying that she likes Ko in a romantic way, but then backtracks and says that she likes Ko as a living creature.  This doesn’t please megane-chick, but before she can say anything else, her boss pokes her head out the door and tells her that her break has been up for several minutes.  She apologizes and gathers her things while telling Ohana that she needs to let Ko’s heart go so he can move on and pauses before telling Ohana that if she hurts Ko, she’ll never forgive her.  Meanwhile, Minko and Tohru are busy touring several restaurants.  At first, Minko is delighted, but after three full meals, she’s bent over dry-heaving because she’s so full.  Tohru snaps at her and tells her that if she needs to throw up, she should do so soon because they need to try the food at all of the famous restaurants in the city.

After Ohana’s conversation with megane-chick, she’s on the train and is about to head back to the hotel to meet up with Minko and Tohru when she gets a phone call from Ko.  She manages to jump  off of the train just before the doors shut and answers her phone.  As it turns out, Ko was just napping and had his phone off (this is a relief to Ohana because she thought he was mad at her).  She ends up telling Ko how she’s planning on kidnapping her mother, but Tohru needs her to bring him along with.  Ko says he doesn’t understand what she’s trying to tell him, but mentions that the girl from the bookstore called him and said that Ohana had stopped by looking for him.  This embarrasses Ohana and she stammers for a moment before saying that she was just in the area and stopped by.  Ko starts laughing and says that she sounds like he did over spring break.  He then tells her that he stopped by the inn and wanted to see her, but they were really busy and that was when Ohana was in the city looking for Tohru.  This causes Ohana to realize that she’s pretty much been using Ko and hurting him by not being able to give him a proper answer to his confession.  She starts to cry, but ends up telling Ko to forget everything she asked him and not to come to the inn.  Ko says he’s still not sure what Ohana is talking about, but says that he won’t go if she doesn’t want him to.  They end their phone call, Ohana saying “later” and Ko saying “see ya.”  This causes Ohana to cry again.  Meanwhile, Tohru is busy getting souvenirs for everyone at the inn (these adorable little sushi pillows/plushies) and Minko is a bit upset that Tohru seems really bent out of shape about Ohana being gone with some other boy, but never says anything about it.

Ohana joins them at the hotel and informs them that Ko won’t be coming and that they should just head back to the inn.  Tohru nods and says that they should go pick up her mother first.  This surprises Ohana, but she doesn’t say anything and goes along with it.  Once they arrive at her mom’s apartment building, everyone is shocked to find that her mother is ready to go.  She tells them that she managed to get a few days off of work and wanted to go to a hot spring inn, but since that fancy new hotel is so popular, it’d be impossible for her to get a room without a reservation, so she’s settling for her family’s inn.  Ohana, Minko and Tohru don’t buy it, but they don’t say anything as they all pile into the van and head off towards the inn.  Sometime in the middle of the night, they pull over at a rest stop to get some snacks and take a break and Ohana takes the time to thank Minko for doing so much for her.  Minko becomes embarrassed and says that it was really Tohru who decided to come to Tokyo.  While the girls are chatting, Tohru and Ohana’s mother are having a chat as well.  Tohru asks Ohana’s mom why she really decided to come to the inn and she admits that Ohana said the same things that she said to her own mother once upon a time.  After a quick flashback, we see that Ohana’s mom went through the same problems with her mother being so involved in her work and not having time for her children.  She then murmurs about how Ohana got angry at her for writing the article before she got angry for not being contacted when her mom was back in Tokyo.  She doesn’t say anything when Ohana and Minko walk up to them, but they get back in the car and continue their trip back to the inn. 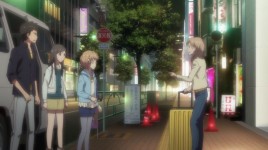 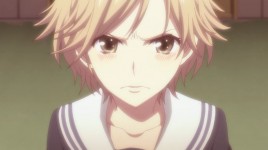 Opinions: While a lot happened in this episode, it felt like something was lacking.  Perhaps it was the fact that I was all excited to see how Ohana, Minko and Tohru would manage to kidnap Ohana’s mom and then it turns out that she was already packed and ready to go.  It could also be the whole scene with Ohana and that megane-chick – who, as far as I’m concerned – can go die in a pit for the way she treated Ohana.  I do understand that she’s angry because Ohana hasn’t replied to Ko’s confession and that’s basically holding up Ko from moving on, but still.  I’m also a bit disappointed that I didn’t see much chemistry between Tohru and Minko while they were alone together, but perhaps the animators decided to show that in order to potentially steer the audience towards shipping Tohru and Ohana together.  (Of course that’s all speculation.)  This was a good episode in many ways, but unfortunately it wasn’t a great episode.