At first glance, this episode feels like a rather slow and somewhat of a “break” episode as far as the plot concerns. As is normally the case though, nothing is ever what it appears, and the ninth episode of Ano Hi Mita Hana no Namae Bokutachi Mada Shirani proceeds to rather beautifully articulate the reactions of its characters as they come to grips with the new reality set before them. The episode also drops some subtle albiet big hints as to the burning question that everyone watching the series is probably concerned with, namely how did Menma die and how is she back as Ghost, if so?

Now, with regards to the idea of what Menma is, I’m starting to form a theory on this. But before I get into that, I want to look at how and what Menma actually being alive has meant to the characters in the series. I think its fair to say, that if anything, simply knowing that Menma is actually alive has only served to worsen the issues that all the characters have. If anything, this new element introduced to their daily lives, has really turned everything upside down. In many ways, its really making them understand themselves, and making it near impossible to hide from the things that they’ve been avoiding and not facing head on.

This week was a harsh week for my hopes of a Anjou x Jintan ending. In fact, if anything, it looks all the more unlikely. Its kind of sad, and I really felt bad for Anjou in the scene: 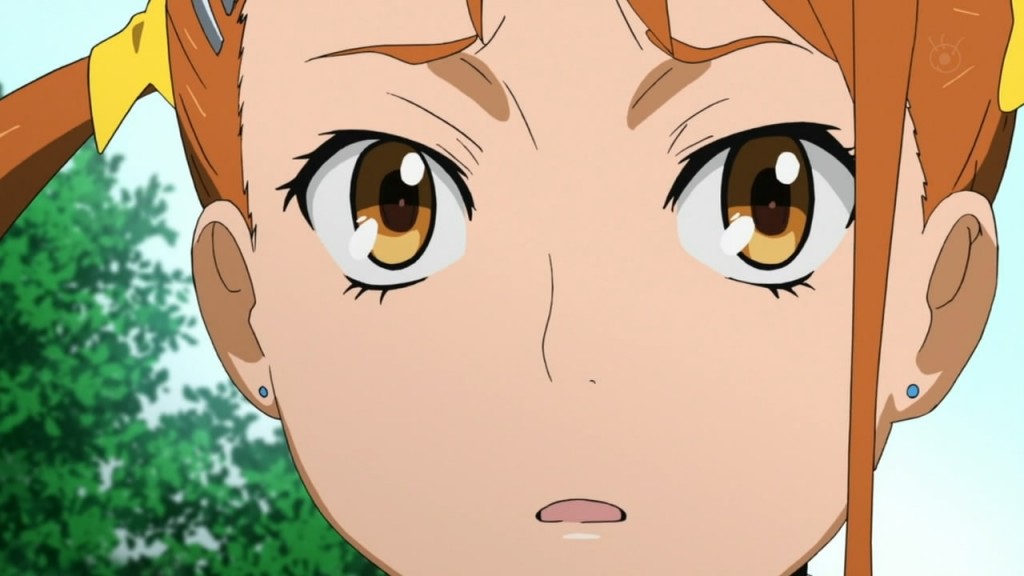 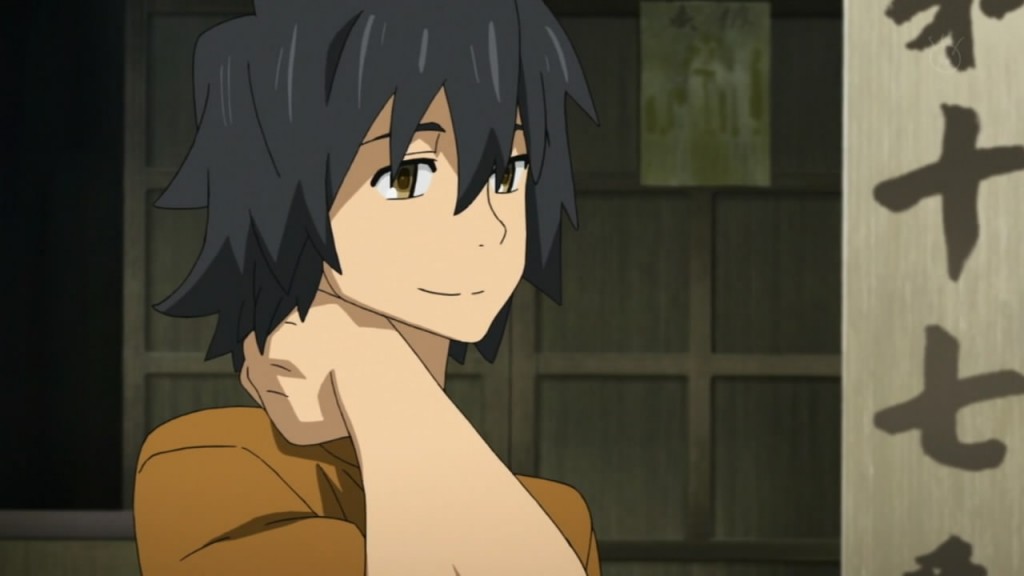 Looking at him so happy, tears her apart… ;_;

Its quite clear that Anjou loves Jintan, and the fact that she can’t win against Menma is actually tearing her apart. Now, I like Jintan, and his character’s come a long way since the start of the series, but I can’t help but be disappointed in the guy. He’s so concerned with a dead girl, albiet a dead girl that was quite dear to him, that he’s ignoring a living girl who’s actually pretty awesome and likes him quite a bit. He’s also purposedly avoiding the issue and constantly flaunting Menma in front of her. I think if anything, Jintan is not being considerate about everyone else around him. While he may be happy to see Menma, its tearing everyone else apart, from the inside out.

Anjou aside, even Yukiatsu is being charred to the bone on this whole thing. Now, I think Yukiatsu is a creep, but lately he’s been really starting to grow on me. He’s quite the logical and smart guy, but at the same time, he can’t avoid his emotions and desires, and this leads him to do things that he can’t really be proud of. He’s in pain for sure, and the fact that only Jintan can see Menma, and that Menma ACTUALLY exists in this kind of situation is tearing him apart.

At the same time, Yukiatsu has found a friend in Anjou, as they both collectively suffer by the return of Menma. What makes it interesting is that Yukiatsu is just as guilty as Jintan, in that he can’t see that Tsuruko is clearly in love with the guy. This leads to a rather sad moment where Tsuruko ends up seeing a friendly moment between Yukiatsu and Anjou, and obviously thinking he’s into her: 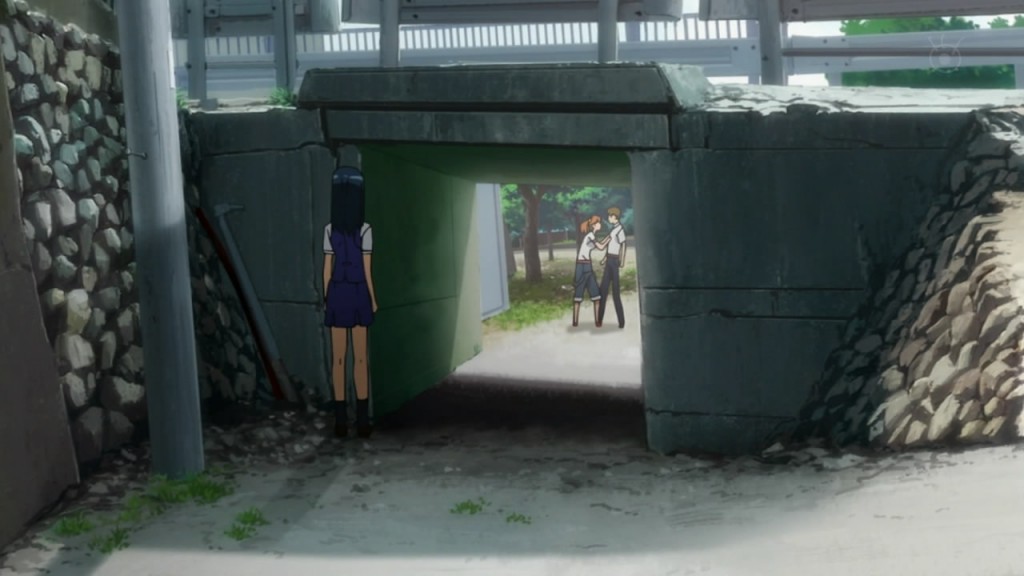 Looking at them so close, tears HER apart too ;_:

Now I seriously doubt Yukiatsu is REALLY into Anjou, and I’d be pretty surprised if they actually ended up as a pair. I highly doubt it. I have a feeling that by the end of this, this group of friends is going to be just that, a group of friends. In both Yukiatsu and Jintan’s defence though, both girls haven’t exactly been good about telling them their feelings. Anjou has said that she “LIKED” Jintan at one point, key emphasis on the past tense. Some Fansubbers have translated it as “I had a crush on you” and that’s a fairly accurate way of putting how the sentence felt and what meaning it conveyed.

Tsuruko has, if anything, been very bad at expressing her feelings. She’s bad with the whole expression of feelings anyway, but man, the way she acts, its not surprising even Yukiatsu doesn’t notice. Or maybe he does? And just doesn’t care? I can say that it wouldn’t surprise if that were the case.

Now… its clear that Menma being back is kind of hard on everyone but Jintan. I’ve kind of developed a kind of hypothesis of how Menma is there, and why Jintan can only see her. I’m thinking that the reason Menma exists right now, is because of Jintan. No she’s not a figment of his imagination in the simplest sense. I’m thinking Jitntan has this super natural power that has manifested by his intense regret and love for Menma. Menma is back because Jintan wants her to be there. And slowly but surely, Menma’s existence is becoming more and more powerful, as Jintan is himself believing more and more in her existence.

I think THAT is why Menma never wrote something before, and that’s why she never though about it. It was at the specific point where Jintan was under pressure, where Menma’s very existence was in question, that she became strong enough to write and interact with everyone. Of course, that’s not the only proof, as we begin to see Menma about to disappear at the river bank when Jintan begins to remember her death. The death, which probably happened on that very bridge where she probably fell. 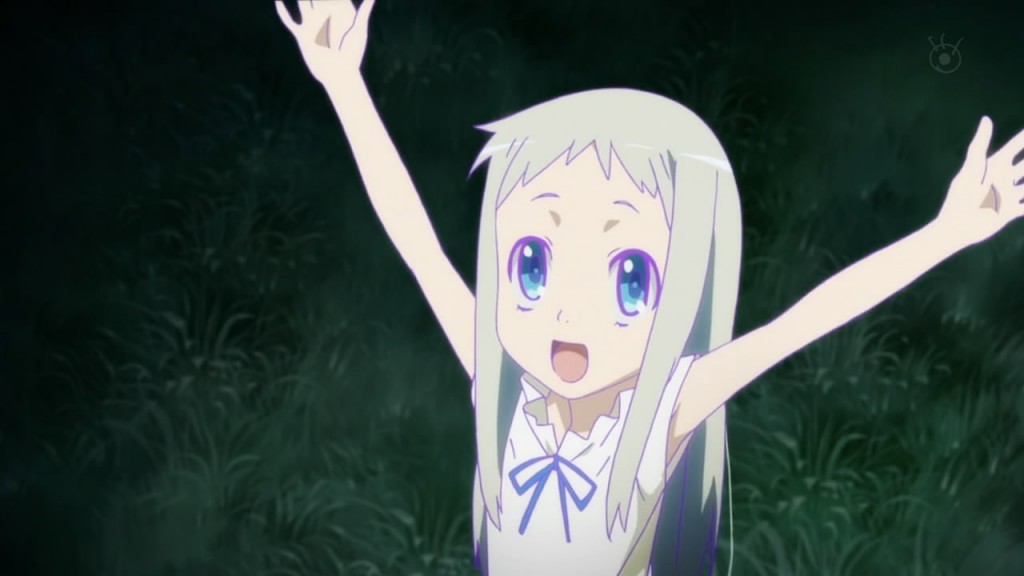 Was Menma about to disappear? O_O

If this is true, and it is actually Jintan who is either calling Menma’s spirit or creating her himself, then it makes a lot of sense why only he can interact with her, see her and converse with her. It also makes the crux of the issue that Jintan has to face. The only way Menma is going to go away, and find peace, if such a thing is even possible for her, is when Jintan is done with all his regrets and is ready to move on.

At this point, Jintan is far from that stage. In fact, Jintan barely wants to move on at all, begging Menma to stay forever. Its a rather sad story of a guy who can’t get over his childhood crush and is suffering and making everyone else around him suffer as well. I think, that the major theme of this series is about “moving forward” and forgetting past problems and pains.

Jintan needs to get over what happened with Menma. Yukiatsu needs to forget about the whole Menma thing as well. Tsuruko needs to stop comparing herself to Menma and be honest with herself and her feelings. Anjou needs to forget about Jintan and move on, Everyone has their own issues, and I guess the next few episodes are going to really define what kind of story this series is going to present.

And if anything, I think we are fairly close to the end. Unless some major twist happens, I can’t see this series going on for longer than 13 episodes. At this point, the build up is towards how Menma died, and what every character is going to choose to do.

Myself personnally, I’m hoping Jintan moves on from Menma. I hope Anjou and Jintan get together, cause I seriously seriously am rooting for those two. And I hope Yukiatsu stops being a dick and actually deals with the issue with Tsuruko.

I guess we’ll see what happens next and how the series chooses to resolve these questions.

I honestly have no idea what’s coming next. Honestly… XD