The World God Only Knows II 09 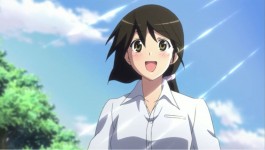 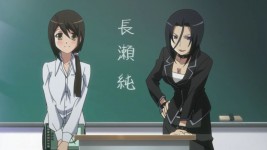 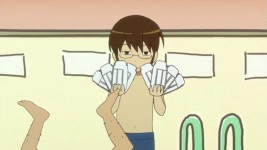 After last week’s lack-luster episode, I tried not to get my hopes up in case this week’s was another disappointment.  Thank God I was wrong.  The episode starts off with a young woman getting ready for work and in due time we find out that her name is Jun Nagase and she’s performing her student teaching at Maijima Academy.  Everything seems normal and happy-go-lucky with Jun riding her bike to school, stopping to scold the group of hooligans Keima got into a fight with in the beginning of the series for littering.  Of course, they ignore her and slouch off, leaving her to huff and pick up their litter for them.  Once at school, she finds Nikaido (Keima’s homeroom teacher and Jun’s senpai) and follows her to the staff’s break room for an introduction.  On the way there, Jun confides in Nikaido that she’s excited for this because she can’t wait to teach students to follow their ideals and bring up as proper citizens.  Nikaido laughs and tells Jun that she hasn’t changed at all since high school, to which Jun whines about and denies.  During her introduction to the other teachers that she’ll be working with, Jun announces that she’s a huge fan of Jumbo Tsuruma, a pro wrestler.  Everyone seems awed by this and a lot of the teachers murmur that they haven’t heard that name in ages, much to Jun’s excitement.  And then…well, then class starts.

Jun finds out that she’ll be helping out with Nikaido’s class and introduces herself, once again proclaiming her adoration for Jumbo Tsuruma.  She’s disappointed to find that no one in the class has heard of him, but tries not to let it get to her.  Instead, she sees herself as a beacon of hope of sorts to help mold the children into model students and/or citizens.  However, she notices Keima who is busy playing his PFP with his virtual reality visor on and is shocked that no one has said anything to him about it.  Nikaido tells her to head to the back of the class and begin taking notes while she starts class.  Jun does so, but continues to watch Keima and wonders if he’s a ghost that only she can see (which even she admitted was a silly thought) and decides that she’ll make him her “project.”  After class, Jun and Nikaido return to the break room where she asks the other teachers about Keima.  Every single person has something bad to say about him, whether it’s the fact that he’s a “monster” for playing his games during P.E. or that he’s a snot-nosed brat who refuses to listen to his teachers, but still manages to get perfect scores on all of his homework and tests.  Nikaido simply says that Keima told her that her class was boring and it pissed her off, so she stopped caring about him.  This strikes Jun as odd and during lunch, she ponders her ability to help Keima since he seems to be a problem child.  Throwing away her wrapper, she makes a decision to march up to the classroom and help Keima. 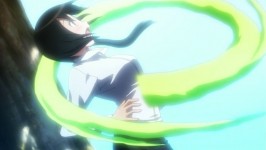 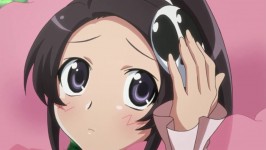 What she wasn’t expecting was to see Keima sitting at his desk alone, playing his games.  She approaches him and asks him if he’d rather play with his friends, to which he simply responds “Friends?”  This startles Jun and she runs out of the room, though we’re not entirely sure why.  Elcie shows up and asks Keima what happened; he shrugs before going back to his games.  Outside, Jun is sitting under a tree in the courtyard and we find out that the way Keima looked at her as if he had completely given up on reality (which he has) scared her and she wasn’t sure how to proceed with the situation.  She continues to think about it and becomes a bit saddened by how alone Keima looked.  Unfortunately, this wasn’t such a good idea for her because a Loose Soul appears and enters Jun’s body!  Of course, she’s not sure what happened and becomes determined to show Keima that good things happen in reality too.  The next day, Jun is heading to class with the English teacher and is a bit worried about how she’ll approach Keima.  However, she doesn’t have much time to think about it because class starts and she’s ushered to the back of the classroom.  She passes Elcie and sets off Elcie’s hair pin-alarm thing, shocking the poor girl and the whole class.  Even Keima looks up from his game when he hears the alarm going off.  Before she can shut it off, the teacher is in her face demanding that she apologize for having her cell phone on during class.

After class, Keima and Elcie are sitting on a bench and Keima asks her if she’s been able to get the information on Jun.  Elcie pulls out her little information thing and reads off the general information; Jun’s name, title and the fact that she’s a fan of Jumbo Tsuruma.  Keima sighs, saying that this is bad because the student-teacher route in dating sims is not only overdone, but extremely difficult because it’s a teacher’s job to be friendly towards students.  Elcie then comments that her alarm didn’t go off the previous day when they saw Jun, so it must still be a low-level soul and that they should try to conquer the emptiness in Jun’s heart as soon as possible.  Keima suddenly asks Elcie to use her reimant to make a double of him so that he can go home and try to figure out how to advance with the scenario.  Elcie complies and scurries off to do so as Keima attempts to sneak out of school unnoticed.  He mentally notes that he can’t interact with Jun during school hours or even on campus because then she’ll peg him as a student and things will be much harder to deal with at that point.  Unfortunately, just as he gets to the school gates, Jun jumps out and surprises him by asking where he’s going.  He attempts to lie and say that he wasn’t feeling well and wanted to go home, but Jun doesn’t believe him.  She then pulls out two soba noodle sandwiches and asks him if he’d like to have lunch with her.  Stunned by her advances, it takes Keima a few seconds to process this before trying to run away again.  Unfortunately, Jun is stronger than she looks and manages to drag him over to a bench where they have lunch together.  Keima is mentally telling himself not to say anything while Jun is chattering away about her love of becoming a teacher.  However, she notices Keima’s less-than-enthusiastic presence and pulls out her cell phone, which has a picture of Jumbo Tsuruma on it.  She then tells her about her love for ideals, to which Keima accidentally murmurs something about how she believes more in ideals than reality as well.  Noticing his slip up, he quickly stands and goes to leave, but Jun stops him and tells him that if he ever wants to talk, she’s there for him.  Back in the classroom, Elcie is worried about Keima but Keima is more frustrated about his situation.  According to him, he’s now stuck in the teacher route and the conquest could take a very long time to complete. 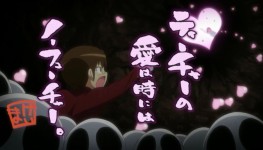 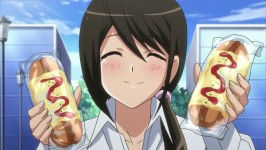 Opinions: This was a really nice, well-rounded episode.  Not only did we start the new conquest (finally!), but we also already know quite a bit about Keima’s next target.  I do agree with Keima though; the student-teacher route is extremely hard and tedious to complete, so I’m curious as to how he plans on going about this now that Jun has labeled him as a student.  This is by-far one of the more challenging conquests for Keima, especially since Jun seems to be making the advancements instead of him.  And with Jun only teaching there for two weeks, will Keima even be able to retrieve the Loose Soul?