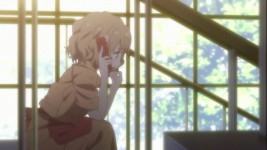 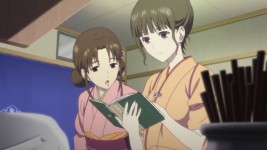 After all hell broke loose last week, I hoped that everything would turn out alright in the end.  Thankfully I was right, but only after a rather bumpy ride for Ohana and the rest of the staff at the Kissui as well as a rather dejected-looking Ko.  We start off the episode with a bit of a recap of everything that’s happened so far; Ohana’s grandmother being admitted to the hospital, Tohru being gone for a classmate’s wedding, the inn being over-booked with guests, Ohana running off to the city to find Tohru and Ko deciding to make an impromptu visit to see Ohana.  For those of you who don’t remember, last week’s episode ended with Ohana peeking through a door at a wedding ceremony, only to have her eyes widen (in surprise?).  I initially thought it may have been because she was witnessing something of the perverted nature – you know, the type of stuff you just cannot unsee no matter how hard you try – or that Tohru was actually the one getting married.  Thank God I was wrong on both guesses.  As it turns out, the best man of the married couple was presenting a performance by the couple’s friends and they just so happened to be entering through the doors that Ohana was peeking through.  As two of the guests open the doors, Ohana falls into the room and lands flat on her face.  Scrambling to her feet, she peers around the room and notes that Tohru isn’t there so she hastily apologizes for the interruption before running off.  This confuses everyone in the room, but no one says anything about what just transpired.

We then see a small montage of Ohana peeking into different rooms, running through hallways and attempting to negotiate with the people watching over the guest list so that she can look at the guest list to see if Tohru is attending.  All of her attempts are shot down and as she’s running through yet another hallway, the straps on one of her sandals snaps and she stumbles, resulting in by far one of the worst falls I’ve ever seen.  She tumbles through a potted plant and ends up landing on a booth, scattering the business men sitting there and nearly flipping a table in the process.  The result is that she’s battered, dirty and has a bloody nose and a torn sandal.  Meanwhile, Tomoe and Nako are doing their best to keep up with the requests of the guests and find themselves in the kitchen preparing some tea snacks for one of the rooms.  Tomoe comments that she remembers seeing a certain couple that was staying in one of the rooms and Nako pulls out the book that Ohana had taken from her grandmother’s room and checks to see if they have stayed there before.  It turns out that they did, and Nako discovers that their daughter isn’t fond of fish and becomes panicked because she has to let the kitchen know before the finish preparing dinner for the guests.  However, before she can do that, her cell phone rings and Ohana is calling her to ask if either she or Minko knows what wedding Tohru is at.  The only information they can give her is that it’s an old classmate’s of his, but this doesn’t exactly help Ohana at all.  Back at the hotel in the city, Ohana is feeling dejected and is about to give up when Ko calls her.  He inadvertently cheers her up and motivates her to find Tohru.  However, when he asks where she is, she says she’s in the city which frustrates him because he had just gotten on the train to go to the small village that Ohana is staying in. 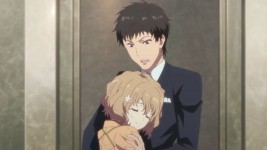 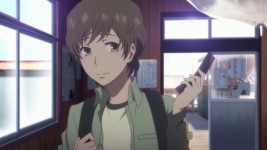 Feeling motivated again, Ohana starts running to every reception and asks the people watching the guest list for the ages of the couples.  After what I can only imagine being an extremely exhausting process, Ohana finds Tohru and promptly faints when she sees him.  She explains the situation the best she can giving her current state and Tohru agrees to head back to the inn with her.  Before they leave, Ohana calls Ko – who has just gotten off the train to the village and is looking at the schedule to go back to the city to find Ohana – to thank him for his motivation.  Ko hears Tohru in the background and asks where Ohana is and she said she’s heading back to the Kissui (naturally).  Ko starts to wonder what he’s doing there, but calls the Kissui to try and book a room, but Enishi now decides to start turning down guests.  God damnit, Enishi!  Because of this, Ko decides to just head home to Tokyo without seeing Ohana, which was a bit upsetting.  Meanwhile, Ohana and Tohru are heading back to the Kissui on Tohru’s bike and they pass the train that Ko is on, but neither of them see each other.  Once back at the inn, Tohru heads straight for the kitchen with Ohana trailing after him, explaining the situation with Ren.  He marches into the kitchen and tells Ren that he’s sorry for being late and this seems to calm Ren down a lot, as he returns to how he normally acts while running things.  Minko asks Ohana how she was able to find Tohru and Ohana says it’s because of Ko’s help.  Minko doesn’t say anything, so Ohana tells her that this is the time she’s supposed to ask her who Ko is, etc., but Minko stiffly tells her to go back to her station.  She’s quickly surprised by Tohru asking her to make the tempura and she happily agrees to.

Ohana changes into a clean uniform and meets up with Tomoe and Nako to discuss what’s going on.  After a quick conversation to catch Ohana up on what’s happened so far, the trio gets back to work.  We get another montage of everyone working (including Jiro trying to change the ingredients for someone’s dinner, but being glared at by Nako and Minko) and a cute moment with Minko and Tohru.  Minko asks him to try her tempura fish to make sure it’s okay for the guests and she ends up having to feed him.  Ohana witnesses it and says that she’s feeling warm and fuzzy inside, which embarrasses Minko but is lost on Tohru.  That night, after everyone is fed and asleep, Ohana gratefully goes to bed and promptly passes out from exhaustion.  The next morning, all of the guests are leaving and Ohana helps an elderly woman and her daughter pack their luggage and take it downstairs to be loaded into their car.  As it turns out, the woman’s daughter had surprised her with a trip up here and mentions that it was for her work, but her daughter scolds her.  So obviously, the woman was the mystery guest and I’m hoping that she gives the Kissui a good rating.  After all of the guests are seen off, the staff is in the break room, enjoying breakfast, when Enishi announces that Ohana’s grandmother has returned from the hospital.  Everyone leaves to greet her at the door and Ohana’s grandmother seems genuinely happy that she’s back and that things didn’t go haywire in her absence. 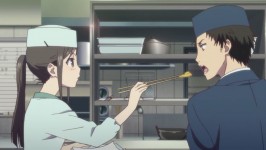 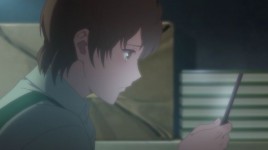 Opinions: While this episode was very tense in terms of what was happening at the inn and Ohana’s search for Tohru in the city, it was balanced nicely with a bit of romance from Ko and some humor once everyone was back at the inn.  I was definitely disappointed that Ko didn’t get to see Ohana and that they kept missing each other, but I had a feeling that something like that would happen.  The fact that Ohana was able to find Tohru and bring him back was definitely an achievement for her and I’m glad that it worked out well for everyone, especially the mystery guest.  Overall, one of the best episodes to date, though I’m hoping that this love square didn’t turn into a love hexagon with the addition of that moe boss of Ko’s.