For lovers of gothic anime, Le Portrait de Petit Cossette/Cosette no Shozou fits in the genre so perfectly its not even funny. Complete with torture, blood baths (literally), murder, sacrifice, and one of the darkest love stories I may have ever come across, this film (released as 3 OVA’s in Japan, but compounded into a movie in the US) is not for the weak of heart. But La Portrait de Petit Cossette has more to offer than an overdose of gothic romance. Yuki Kajiura, one of my favorite composers who was responsible for such brilliant soundtracks as Noir, Madlax, and .Hack, provides the film with beautifully haunting music (think violins, harps, and ghostly soprano singing) that completes the atmosphere and puts the viewer into that melancholic state necessary to truly appreciate this work of art. 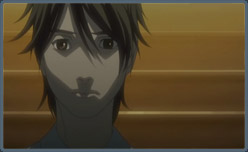 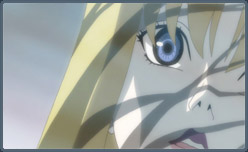 Rarely have I seen so much attention given to cinematography, smooth animation, perspective, color, lighting(!), and design. Cossette pulls out all the stops when it comes to showing things from unusual angles (through a cell phone, the reflections of peoples sunglasses, etc). The surreal essence of the anime allows for all sorts of visual experimentation which I would really love to see more of in other Aniplex releases. It opens with a small glowing light, falling upon the portrait of the girl, Cossette.

There is also a female voice (I would highly recommend watching the Japanese version, her voice is more fitting) , saying “Who would love me so much that they would cast aside their own precious life? If someone were to drown in the seas and die for my sake, then I would be released from stone, and I would return to life, to life once more. But if I were to return to life one day which would give me the most important thing I would then cry, alone. I would cry, longing for my stone. Of what use would my blood be, even if it were to ripen like wine? For it would not be able to bring back the one who loved me the most from the water’s depths… ” As the girl is saying these words, the frame zooms out until we see many portraits of Cossette, in different colors, which from a distance turn into the image of a skull. Honestly I think this sequence would have served as a better trailer than what Aniplex came up with… 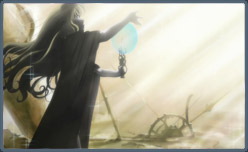 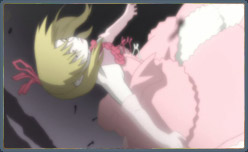 The storyline follows the son of an antique’s dealer, Eiri. He runs the shop in his father’s absence. Among the antique’s there is a very special Venetian glass in which he sees the life of a girl “unfold like a documentary.” Nobody else can see this girl except him, and he becomes more and more infatuated with her, drawing her in his sketchbook, until eventually he is able to enter her world. He discovers her horrible death, his part in it, and in the same breath as he finds out that he also may be able to help her– but only for a heavy, heavy price. Basically, this premise sells itself.

The English dub version isn’t bad, but mainly I would recommend the sub for the sake of Cossette’s japanese voice, which sounds more mature in the Japanese track. Considering that Cossette has been in limbo for the past 250 years, it doesn’t make a whole lot of sense to me for her to sound like a little girl. It comes off as a bit jarring, but I generally have an aversion to the whole little girl voice that seems so popular in the anime industry.

Cossette is probably the most complex character, while Eiri becomes so infatuated with her that it is a little difficult to make out his personality behind the emotions. What we do get is the opportunity to watch Cossette grow to care for Eiri more and more, to slowly open up to him and allow him to pity her. I would have liked to see more of Eiri’s personality, but I think the focus of the anime is his relationship with Cossette, and there was plenty of development in that department. 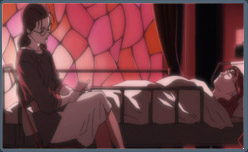 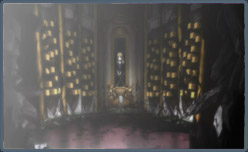 Eiri is sucked into Cossette’s world of suffering, which looks quite literally like an intricate surrealist painting. The storyline requires some suspension of disbelief, but this suspension isn’t difficult when Yuki Kajuira’s music and the visuals draw you in from the get-go. Plus, the whole surrealist vibe basically screams ‘this isn’t supposed to make perfect sense.’ It really has to be watched like art rather than a film. A wonderfully gothic, moving piece of art exploring love, beauty, and sacrifice. We give it a B+!

A guest writer who did a series of articles for Anime Evo.