The World God Only Knows II 06 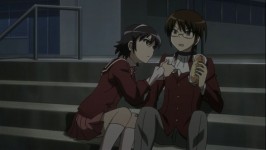 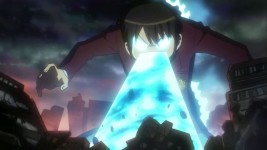 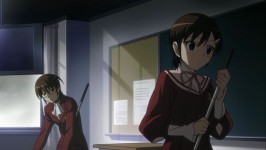 After last week, I honestly thought that Keima may give up on his contract to retrieve Loose Souls with Elcie and lose his head (literally).  Thankfully, Ayumi comes to the rescue and that doesn’t appear to be happening anytime soon.  The episode picks up where we left off last week, with Keima collapsed on the floor due to immersing himself so much in games that he stopped eating and sleeping and Ayumi trying to cheer him up after his fight with Chihiro.  At first he struggles to his feet, telling her that he has no attachment to the real world, so he never got into a fight in the first place.  As he tries to saunter off, he ends up collapsing again.  Sighing, Ayumi grabs Keima and drags him outside and hands him her soba noodle sandwich and a juice, telling him that he needs to eat.  At first Keima refuses, so Ayumi snatches the juice from him and opens it up for him before thrusting it into his hands.  As Keima scarfs down the food, Ayumi tells him that when she hears Chihiro badmouth him, she feels uncomfortable.  Keima asks her why, and Ayumi becomes flustered and stomps off (after planting her foot firmly into his face) and says that he should be sure to help with cleaning duty since they’re both assigned to it that day.  As Ayumi runs off, Elcie appears and Keima asks her if the girls really do forget what happens after the soul is captured because something seemed off about Ayumi and the way she acted towards him.  Elcie says that they do forget everything that happened during the conquest, but since Keima has filled the emptiness in their hearts, they’re never quite the same afterwards.  She then points out that this is never a bad thing because they’re typically happier and “shine” more than they did before the conquest.  Keima says that Ayumi looks the same to him and he didn’t notice a difference before shuffling off towards class.

Elcie follows him and begs him to help Chihiro, but Keima blows up at her and says that he wants nothing to do with the real world and that includes Chihiro.  Elcie backs off (for now) and the two go about their daily routines.  However, at the end of class, Ayumi is nowhere to be found and Chihiro is helping Keima with his cleaning duties instead.  She tells Keima that she was only helping Ayumi out since she needs to practice for the upcoming track competition.  Keima realizes what Ayumi has done and says that she’s an evil genius before telling Chihiro that they should start cleaning so that they can get done faster and go home.  Chihiro agrees and as the two start cleaning, Keima catches her staring at him.  She becomes startled when she realizes that he caught her staring at him and shuffles closer to the window, only to squeal in delight as her current “love” happens to be outside the window talking to one of his friends.  Chihiro continues to watch the object of her affection while Keima walks over to see what’s going on.  She flails, drawing the attention of her crush before grabbing Keima and pulling him to the floor with her.  Keima struggles for a moment before becoming silent and Chihiro ends up letting him go.  She then sighs and wonders how she should confess her love to him before remembering that his birthday is drawing near.  Keima scoffs at her and tells her that there are four common things to developing a relationship: the meeting, impression, getting to know one another and then the confession.  He tells her that without doing all four things, she’ll continued to get rejected.  This strikes a nerve and she demands to know if he’s even confessed to someone before outside of his games and he blushes, saying that it wasn’t a big deal since he’s the God of Conquesting in games and it’s not much different in real life.  Chihiro then begs him to help her confess to her crush and at first, Keima refuses, but then realizes that the way to get the Loose Soul of her isn’t to conquer her himself, but to help her confess to her crush!  Elated at this thought, Keima agrees to help her. 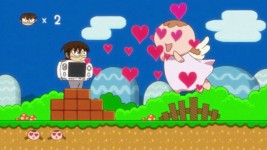 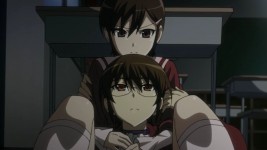 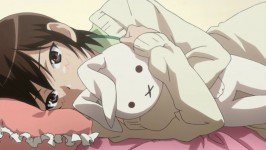 The next day after school, Keima greets Chihiro for what can only be described as a battle planning session.  He unrolls a large banner on the chalk board behind him, showing Chihiro’s crush and all of his potential movements.  He then tells Chihiro to listen to everything he says since that is the only way she’ll be able to confess to this guy.  At first Chihiro doesn’t believe him and calls him a nerd, but Keima notices the guy they’re trying to conquer walking past, so he grabs a cup of tea and shoves Chihiro out of the room.  She stumbles and falls on top of the poor guy, spilling her tea on him.  Furious, she screams at Keima, but he calmly explains that a negative impression will become positive over time, which can result in a “thicker” relationship (he really likes to use flower analogies).  He then hands Chihiro a large stack of papers, saying that he spent all night typing up the “script” for how all of her potential encounters and conversations with this guy could go.  He tells her that he expects her to read and memorize it all by the next day, but as Chihiro starts to protest, Keima and Elcie are already gone.  That night, she is lying in bed, staring at the tv and debating whether she should be reading the script or not.  Deciding to ignore it, she calls her friend and starts chatting with them instead.

The next day, as she’s putting her things away, the boy she likes notices her and they talk for a bit (which makes Chihiro ecstatic) and she rushes up to Keima to tell him the good news.  He asks her if she read the script and when she says no, he sighs before telling her that he’ll support her through her conquest.  And support her he does!  He utilizes Elcie’s powers to conceal himself while reading Chihiro lines as she talks to her crush and though Chihiro isn’t sure where his voice is coming from, she follows his instructions and it seems as though her relationship with this guy is continually growing stronger.  A few days later, Keima is going over their schedule, but Chihiro tries to start a conversation about how she heard on tv that Americans don’t usually bother with umbrellas in the rain because they’re troublesome.  Keima scolds her for talking about something as silly as tv and Americans before standing up and telling her that she is to confess to the boy she likes tomorrow after school.  Although she should be happy to hear that, Chihiro looks a bit upset.  Maybe she’s falling for Keima instead of who she thought she liked? 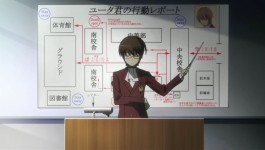 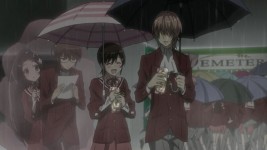 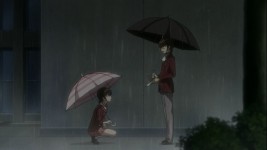 Opinions: This was a good episode, though not one of the more engaging ones.  Perhaps it’s because Keima isn’t doing the conquering himself (consciously at least) or because Chihiro is just an average girl with no real intriguing qualities.  Now I see why Keima didn’t want to conquer her himself!  Overall, it was a good episode and I’m kind of surprised that Chihiro seems to be falling for Keima instead since she always teases him.  Or maybe she liked him all along and is just now getting to know the real him?  Either way, now that she’s going to be confessing, it will be interesting to see how it turns out next episode.