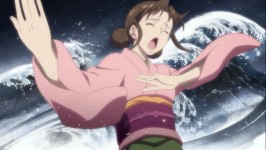 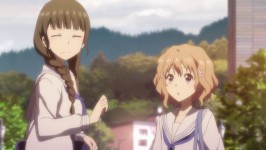 This week, instead of watching Ohana and Co. go about their business, we get a deeper look at Tomoe’s character and some of her personal problems.  Admittedly, I was really excited when I found out that we’d be focusing on Tomoe this week because there seemed to be so much more to her than just gossip and being the head waitress.  And ho boy, I wasn’t wrong.  The episode starts off with Tomoe getting ready for work while talking to her mother on the phone.  As it turns out, her mother is begging her to come home the following week because she had set Tomoe up for a match-making session with a well-to-do business man in her hometown.  Tomoe argues against it, saying that she’s happy with the way her life is now, but her mother reprimands her and says that she wants to see her grandchildren before she dies.  This seems to strike a nerve with Tomoe, but she still tries to wriggle her way out of the meeting by saying that she’s swamped with work at the inn, but her mother cuts in and asks her what happened to her plan of working at the inn until she was able to catch the eye of a wealthy guest and become his wife.  When Tomoe has no answer for her, her mother tells her that she expects to see her home in a week for the meeting and promptly hangs up.  The whole conversation seems to bother Tomoe on her ride to work and she mulls over her options of staying at the inn and continuing her career or quitting, heading home and starting a family of her own.

When she arrives at the inn and changes into her uniform, she sees Ohana and Nako heading out to school for the day since they completed their chores early that morning.  Tomoe shoos them off, but seems to be jealous of the fact that they not only are still young but also get to wear mini skirts (because apparently that’s important?) and have time for recreation as well as find love.  Tomoe becomes rather dramatic at this point, but is embarrassed when Ohana’s grandmother appears and asks her to stop being so dramatic because “they” are arriving later that morning.  This seems to snap Tomoe out of her daze and she becomes rather serious, although we still don’t know who “they” are.  However, we find out soon enough.  After school, Tomoe and Ohana are heading back to the inn for their afternoon’s work, but they pause when they notice a bit of rustling in the bushes.  At first, the girls are just confused, but when the rustling begins getting closer to them, Nako panics and sprints towards the inn, Ohana on her heels.  The only thing we see as the two girls run towards the inn are several men in combat gear with assault rifles saying that their target is known to work at the inn.  Hmm…  Interesting! 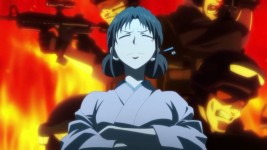 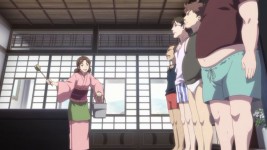 Instead of being a squadron of elite special forces sent to retrieve Tomoe like I initially thought they were, the men in the combat gear stalking Nako and Ohana turn out to be the guests Ohana’s grandmother was speaking of earlier.  Apparently they’re a group of survival game enthusiasts who visit the inn about once a year to have fun playing their game.  Seems innocent enough until Tomoe mentions that they tend to focus on one or two employees throughout their stay and follow their “target” throughout town.  Apparently they’ve settled on Nako as their “target” this year.  Nako is none too happy about this, but Tomoe tells her to calm down because they won’t follow her in the inn itself.  This seems to calm down Nako and the girls go about their work like normal.  However, later that night, Ohana decides to take a bath while she’s supposed to be cleaning the hot springs (shame, shame Ohana!) and the gamers begin to advance on the wall shielding the springs from view.  Thankfully Tomoe happens to be walking past there at that moment and calls out to them, asking what they’re doing.  They scurry off and Ohana calls out, asking if anyone is there.  Tomoe finds her in the locker room and she tells Ohana what the men were doing.  This shocks Ohana and baffles Tomoe; apparently they had tried peeking in the locker room the previous year, but never in the baths.  She then scolds Ohana for taking a bath during her shift before heading home.

Once home, she mulls over whether she should quit her job and head home, leaving Nako and Ohana alone to do the bulk of the work, but she soon remembers how flustered Nako was earlier that day just hearing that the gaming group was back again.  She soon decides that she’ll do whatever she can to irritate the customers so that not only will they leave, but they’ll complain about her to Ohana’s grandmother and she’ll be fired, allowing her to go home and start a family of her own.  Determined to follow through with this, the next day she arrives at work with gusto only to find that Nako and Ohana are at a loss of what to do.  Breakfast is served at 8am, but none of the guests are awake, so they’re unable to prepare their breakfast for them.  Sensing a way to get herself in trouble, Tomoe grabs a bucket and ladle and marches into the guest’s room, waking them up.  However, instead of getting angry with her, they salute her and follow her orders as if she were a commander.  Stunned, Tomoe tells them to leave the room so they can prepare their breakfast and the men follow her orders, which thrills Ohana and Nako.  Later that morning, as Ohana and Nako are cleaning up the guest’s breakfasts, Minko races over and looks like she’s about to murder someone.  It turns out that the survivalist group didn’t touch the gourmet breakfast that Ren and Tohru slaved over and she’s furious that they wouldn’t even eat it.  Tomoe mentions that they usually bring rations like what you would find in the army and gets another idea of how to get herself in trouble.  She enlists Minko to make them rice balls and forces them to eat it.  Instead of the result she’s looking for, they’re blown away by the taste and beg Minko to make them more, which thrills her.

At the end of the day, Tomoe seems to be out of ideas on how to get herself in trouble so that she’ll be fired.  However, she remembers the guys trying to peek on Ohana in the baths and enlists Jiro’s help for an ambush.  Everything goes according to plan and as the guys manage to vault themselves over the wall, they’re not only surprised to see Jiro instead of a woman, but Tomoe has a rather large hose (probably used to clean floors and such) which she turns on the men.  They end up retreating rather quickly and Tomoe is happy that her plan succeeded.  However, as she’s heading back towards the kitchen, she sees the group talking to Ohana’s grandmother.  Figuring that they were complaining about the service, she heads over and apologizes for her actions.  Ohana’s grandmother is confused as to why she’s apologizing because it turns out that the group is thanking them for going out of their way to make this their best visit ever.  They then salute to Tomoe and thank her for a wonderful time, which surprises Tomoe, but also steels her resolve about continuing her work at the inn.  Once at home for the evening, she calls her mother and tells her that she won’t be quitting her job, but does promise to have children before her parents become too old to play with them.  This seems to appease her mother and all is right in Tomoe’s world once again. 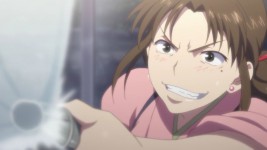 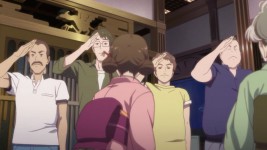 Opinions: This was yet another excellent episode!  I loved getting to learn a little bit more about Tomoe as a person and seeing how she deals with personal problems.  The whole survivalist group was hilarious and I can only imagine how stressful it would have been for the girls to have to deal with, but it was all in fun and games after all.  The fact that the guests appreciate Tomoe’s efforts as more fun instead of getting angry really shows that they’re all good guys at heart and meant no harm.  I really can’t wait to see what happens next week, since the preview showed Ko on a train.  Could he possibly be visiting?