Another Solid episode. Ano Hi Mita Hana no Namae continues to be the emotional roller coaster ride that it established itself to be from the very first episode. This episode in particular, doesn’t shy away from making the viewer a bit uncomfortable. It is interesting, that while most preceding episodes have ended and felt a bit positive, this episode is definitely on the more “frustrated and depressed” side of things.

I have to say, for all the crap I gave Yukiatsu for the latest three episodes, I’m actually beginning to like the guy. I guess the real saving grace for Yukiatsu was that he did indeed have a valid reason for being as fucked up and twisted as he was. The scene between him and Menma, shortly before her death, was a really emotionally heart felt one. Unlike Jintan, Yukiatsu had, even as a kid, had the balls to tell Menma how he felt. Unfortunately for him, Menma didn’t like him, and he ended up blaming himself for putting her in such an awkward position.

I think the most realistic part of the show is the fact that the show’s characters are damaged, and for good reason. A lot of them are actually at the time of their lives where they’re figuring out who they are and what they want to be. This couldn’t be more true for Anjou.

I feel like, based on how the story is progressing, each character in the story has their own personal trauma and hurdle to get over. For Yukiatsu, it was getting over the the self loathing and hate over Menma’s hate. For Tsuruko, I’m assuming its just getting together with the guy she likes, despite the fact that she can hardly express her like for him.

For Jintan/Yadomi, its the trauma he got from loosing Menma and then his mother. Jintan has to bring himself out of his depression and get his life back together. He also has to forgive himself for what he did to Menma, right before she died.

For Anjou, as much as it pains me to say it, she really has to get over her first love/crush, Jintan/Yadomi himself. I think the conversation between Yukiatsu and herself over the train really illustrated this concept. This may be meare speculation on my part, but I feel like the story is setting it up so Anjou can forget about Jintan, find herself as a person and do what she wants in life.

I’m finding it difficult to actually see the Anjou and Jintan coupling happening, if not in the story, then definitely in this series. Doesn’t mean it wouldn’t be epic AWESOME, but at the same time, it seemss less and less likely. I guess we’ll just have to see.

As a plus, we did see her shyly describing how much she liked Yadomi/Jintan and why: 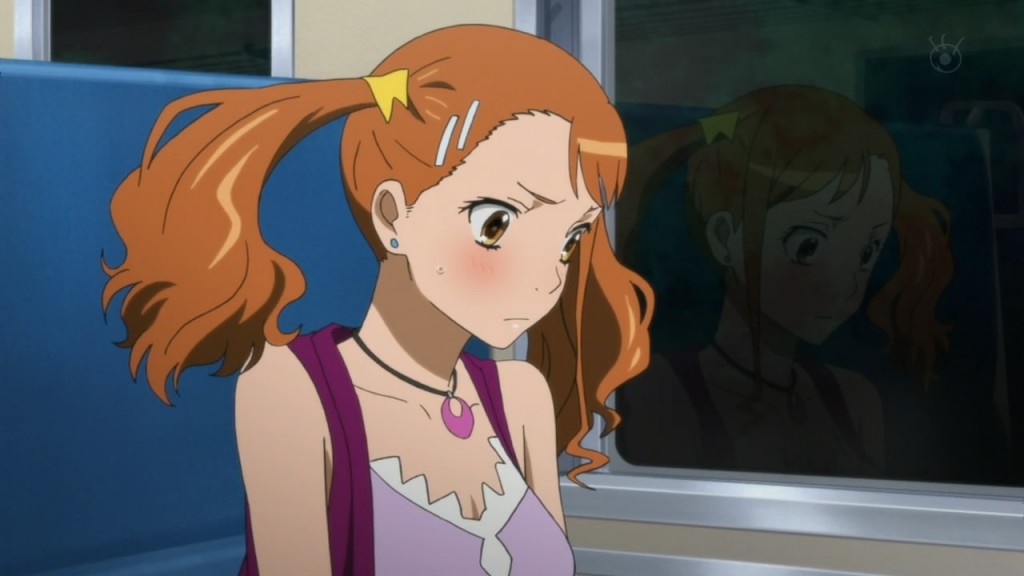 Is there anything wrong with liking him? >_>

On the subject of Anjou, this episode had her in quite the precarious situation. I felt really sorry for her, and her naivety really showed in how she went with the guy, only to realize that he had taken her to a love hotel. I really shuddered in disgust as  it seemed like the series might put a much darker spin on Anjou and have her “graduate” from her innocence in the most horrific way possible.

I was glad to see Yukiatsu come in and save the day, as a result. I have to admit, beyond his issues with his past and Menma, the guy is actually pretty cool. I especially like the fact that he refuses to run from the rather disgusting behavior that he was responsible.

The final big peice of this episode’s emotional puzzle, was Menma herself. I think its gotten to the point where she’s just as frustrated as everyone else at not being able to talk to them. Even more so, she’s been avoiding the issue of why she IS here, and why only Jintan can see her. My guess? Its because she liked the guy, but at the same time, I don’t expect it to be as simple as that.

The anime is still holding the major reveal of HOW exactly Menma died, and that is probably going to factor in greatly to how things resolve. At the moment though, all the characters are honestly stuck in a rutt, and are slowly trying to make it through some of the most difficult times of their lives.

This makes for excellent drama, great story and some amazing slice of Life stuff. I really can say, that while this episode didn’t leave me smiling like the first 3, it definitely impacted me just as heavily.

Things don’t seem to be getting any cheerier next episode. Seems like we’ll have some more interaction between Anjou and Tsuruko, while Poppo and Jintan continue to bond. See you all next week! =D