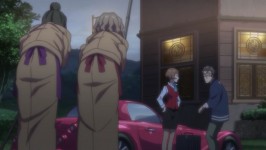 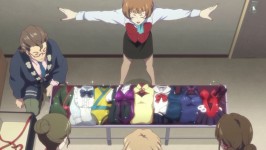 This week, we arrive on a long anticipated day: PAY DAY!  Ohana receives her first month’s salary from working at the inn and although she seems depressed that she only managed to earn 20,000 Yen (Nako tries to cheer her up by saying that her food and boarding costs were likely deducted from it), she’s really ecstatic to have earned that much.  Turns out, she was only making 8,000 Yen a month when her mom gave her her allowance, and that was for cooking, cleaning and doing laundry!  Because of this, Ohana is raring to go and work hard to earn even more money.  As Ohana and Nako are outside sweeping the path leading up to the inn, a large red car speeds onto the property, surprising the girls.  Once the dust settles, a woman steps out of the car (some of you may remember her talking to Ohana’s uncle in episode 1) and the girls greet her.  However, it appears that their greeting isn’t satisfactory and the woman orders them to say “Welcome” whenever a new customer comes onto the property.  The girls stutter for a second before shouting “welcome” at her and bowing.  Thankfully, Enishi (Ohana’s uncle) comes to the rescue and meets the woman and brings her to his mother’s office.  As the two head into the inn, Ohana mutters something about wanting to clean up the woman’s attitude as well, but Nako shushes her.

The woman turns out to be a managing consultant for troubled businesses named Takako Kawajiri, and she appears to have gone to the same university as Enishi.  At first, Ohana’s grandmother tells Takako that they don’t need her services, which infuriates Takako and puts Enishi between a rock and a hard place.  Takako storms off with Enishi hot on her heels and she calls all employees into the break room.  Tohru and Ren are complaining that they were in the middle of cooking everyone’s breakfast and Tomoe asks if the meeting can wait because she, Nako and Ohana were in the middle of cleaning rooms, but Takako says that everything else can wait.  As the group mutters about how they aren’t looking forward to it, Ohana whispers to Nako and asks how often Takako shows up at the inn.  Nako whispers back, saying that she comes there about once a month and always has some sort of off-the-wall idea on how to get more business.  At this point, Takako calls attention to herself and says that this month’s meeting will only pertain to the waitresses.  Ren, Tohru and Minko all get up, saying that if the meeting doesn’t pertain to them, they should really be working on breakfast.  This irritates Tomoe, but since there’s nothing she can do, she lets them go. 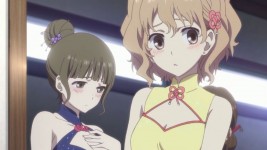 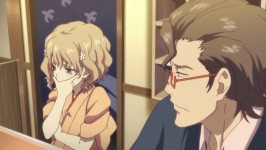 After the chefs have left, Takako has Enishi open up the suitcase she’s brought and lays out several waitress costumes, ranging from Chinese dresses to lingerie.  All of the girls are horrified by the selection, but Takako presses on in stunning Engrish that “nothing ventured is nothing gained” and the girls should try something different since their current uniforms are too old-fashioned.  Nako and Tomoe are heavily against wearing any of the costumes, but Ohana seems willing to give it a shot.  After persuading Nako, the two younger girls go to change into two of the less skimpy costumes, which embarrasses them but thrills Jiro and Enishi.  Meanwhile, Minko finds Tohru staring at someone through a crack in the door to the locker room.  When she asks what he’s looking at, he flushes and tells her to hurry up and get back to work.  Minko notices Ohana and Nako in the locker room (both still clothed, thankfully) and she seems to get a bit jealous.  Anyway, after the girls show their new outfits to Enishi and Takako, a customer with a reservation arrives and is stunned when the two girls greet him.  He’s so shocked, that he stumbles and falls on top of Ohana, just as his wife and daughter arrive.  Later, Ohana and Nako are back in their usual uniforms and Tomoe is apologizing profusely to the customers.  The man says it’s not a big deal and they shouldn’t have to apologize, but his wife seems irritated by it, which causes Tomoe to apologize even more.  Afterwards, Ohana, Nako and Minko are heading to school where Ohana is trying to figure out where they went wrong in terms of their outfits.  At school, Yuina asks Ohana what’s bothering her and notices the wide array of cosplay magazines on Ohana’s desk.  The conversation turns to how Ohana and her co-workers should try wearing something more risque, but Ohana only seems dejected by the conversation.

When the girls arrive back at the inn that afternoon for work, Ohana and Nako see Enishi begging Takako not to leave because they really do need her help.  Takako snaps at him, saying that if they don’t want her help, then she sees no point in staying.  While Enishi tries to convince her to stay, his mother simply says that they don’t need her help and Takako slams her car door and speeds off, leaving Enishi dejected.  Ohana’s grandmother then turns her attention to the girls, welcoming them back.  Minko and Nako scurry off to start their work, but Ohana is too busy watching Takako speed off to remember that she’s supposed to be working.  The rest of their shift seems to go without a hitch and that night, Ohana learns from Tomoe that Enishi did go to university with Takako and seems to have some sort of romantic feelings for her.  Once Ohana sees Nako off, she sneaks up on Enishi to try and console him.  He seems really torn up about not only Takako leaving, but about how the inn is doing business-wise, and Ohana flicks him on the forehead before telling him to cheer up because nothing will come of sitting there worrying.  At this point, Enishi then says that Ohana is exactly  like her mother, down to the point where they both would cheer him up without really saying anything.  This seems to mean a lot to Ohana, and they talk for a bit longer before she excuses herself to bed.  Before heading to bed, Ohana and Minko are talking about the fate of the inn when Ohana suggests that Minko should become a waitress because Tohru would like seeing her in a waitress outfit.  This either embarrasses or angers Minko (or both) because she rolls over and tells Ohana to shut up and die, effectively ending their conversation.

The next day, Ohana decides to try talking to her grandmother about the state of the inn, but she apparently doesn’t want to hear it.  She threatens to fire Ohana if she hears her say one more thing about the inn going out of business before kicking her out of the office.  Dejected, Ohana is about to start her chores when the elderly man who helps out around the inn spots her and beckons her to follow him.  He ends up taking Ohana to a small attic that stores a ton of old kimono and such from when her grandmother was a young woman.  Stunned by how gorgeous everything is, Ohana is struck by an idea and as luck would have it, Nako appears right around then.  The two dress in kimonos with a starched white apron and go about their chores wearing that.  They receive a ton of compliments from the customers about how pretty the kimonos are and some of the older customers reminisce about when the inn was first opened.  This not only garners attention from the customers, but from the staff as well.  At the end of the day, life seems to have been breathed back into the inn and Ohana hopes that everyone will be more motivated to help the inn succeed and garner more business. 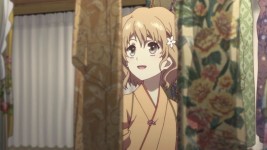 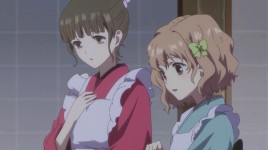 Opinions: Once again, this was an amazing episode where we see not only how much Ohana has grown as a person, but how well she’s beginning to get along with her co-workers.  The fact that she and Minko were able to hold a conversation for a bit before she pissed off Minko was a feat in itself, and it seems as though Nako is more comfortable around Ohana as well.  Although Takako kind of irritated me with how she acted all high and mighty towards the staff, I have a feeling that she really does want to see the inn succeed, even if her ideas are completely crazy.  Enishi and Ohana’s moment was really sweet, especially since he said that Ohana reminds him of his older sister.  Although I’m starting to get a bit concerned with Tohru.  Please tell me he’s not falling for Ohana! D:  That would not only be devastating for Minko, but for Ko as well!  Ko-chan, you better step up your game since it looks like you have competition.