The World God Only Knows II 04 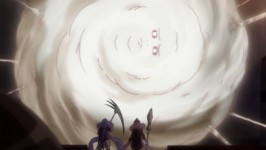 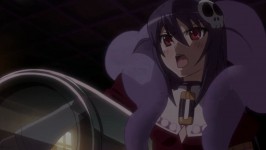 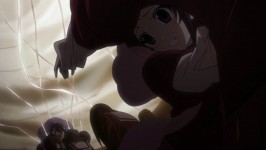 After last week’s cliffhanger, I was stoked to find out how Elcie, Haqua and Keima planned on capturing the loose soul that managed to escape.  Unfortunately, the episode wasn’t as awesome as I was anticipating.  We pick up where we left off last week: Elcie has just discovered the loose soul hiding out in the school’s theater, where numerous students are knocked unconscious as the soul feeds on the emptiness in their hearts.  Haqua comes rushing into the room, leaving Keima by the entrance and Elcie is relieved to see her.  However, Haqua ignores Elcie all together and pulls out a Detainment Jar (or Retainment Jar, I’m sure either one works) and starts attempting to pull the soul into the jar like we normally see Elcie do.  At first, it appears to be working, but the soul becomes aware of what she’s doing and somehow takes control of the students that are unconscious via these thick, white tendrils that it shoots out from it’s body.  I have to admit, I was a bit grossed out at first, but then I realized that they could be much, much worse looking.  Anywho, the students – who are now under the soul’s control – begin attacking Haqua and Elcie.  Haqua shouts for Elcie to hold back the students while she tries to capture the soul, but Elcie shouts back that she can’t keep that many targets under control using her rainment.

This clearly annoys Haqua, given by the fact that she calls Elcie an idiot because apparently multi-tasking with your rainment is one of the easiest things you can do.  Haqua’s annoyance aside, the soul uses the fact that the girls are incapacitated by the students to escape, leaving Haqua high and dry.  She seems depressed, but when Elcie suggests that they both go looking for it, Haqua snaps at her and calls her useless before telling her to stay put because she can capture it on her own.  Keima, who until this point has been lying on the floor (playing his PFP) and saying that’s just an innocent bystander, pipes up and tells Haqua that she should really take Elcie with her to help.  This irritates Haqua even more and she flies off, leaving Keima and Elcie alone in the theater.  Keima then orders Elcie to follow Haqua, but Elcie sighs and says she won’t because she doesn’t feel that she can be of use to Haqua.  She then starts drawing a fire engine and humming, saying that Haqua is awesome and can take care of herself.  Keima pockets his PFP before grabbing Elcie by the back of her shirt and dragging her off in search of Haqua.  Meanwhile, Haqua is on the roof of the theater, attempting to track the movements of the soul.  She seems disheartened as she mutters about souls not moving in the patterns described by the books she studied while in school.  She then starts to think back to when she was awarded the Merit Scythe for her excellent grades and performances in field tests.  The fact that she remembers everyone at school telling her that she’s amazing and a role model only makes her more depressed. 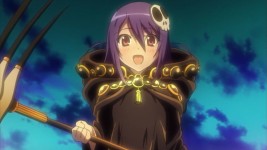 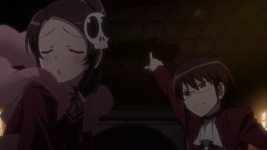 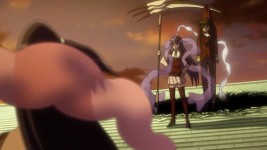 As Keima is dragging Elcie along the pathway towards the school building in search of Haqua and the loose soul, Elcie’s detector starts blaring and Keima then points to the roof of the theater, saying that they must be up there.  Elcie picks up Keima and flies the duo up to the roof, shouting happily at Haqua.  Unfortunately, Haqua turns towards them and asks who they are.  Judging by the way her eyes are glazed over, I’m going to say that the loose soul managed to take control of her by utilizing the depression and despair she was feeling at that moment.  Keima begins to say as much when Haqua turns her scythe on him and picks him up by the back of his shirt.  Elcie shouts at Haqua, telling her to let Keima go, but Haqua doesn’t listen to her.  Instead, she starts shouting at Elcie, saying that she was the best in school so she doesn’t understand why she’s so horrible out in the field.  She ends up laying all of her emotions on the table and Keima then tells Elcie that she’ll need to be the one to fill the emptiness in Haqua’s heart.  Elcie seems at a loss of how to do that and also seems to be out of time since Haqua attacks Elcie by sending out several students who are still under the soul’s control towards her.

Elcie is overwhelmed, but after some more shouting she manages to find the strength to tackle Haqua in a hug, sending the two of them flying off the roof.  She then tells Haqua that everything will be okay and even if she (Haqua) isn’t the best in the field, she’ll always be an amazing demon and a roll model to her (Elcie).  Somehow this ends up getting through to Haqua and the duo get ready to attack the soul once again.  Before they begin though, Haqua admits to Elcie that this is her first soul and she’s not entirely sure what to do since it’s nothing like the text books.  Elcie reassures her and the two get prepped for their attack.  However, this time Haqua decides to keep the students at bay while Elcie captures the soul.  Their plan works and the soul is secured inside the detainment jar.  Afterwards, Elcie hands Haqua the jar, saying that it’s her first official capture soul.  Haqua is overjoyed and thanks Elcie before telling Keima that he’s actually not a bad person and she’s sorry for how she acted.  After he accepts her apology, Haqua flies off, leaving Elcie and Keima on the roof of the theater.  Elcie tells Keima that she’ll buy him a fried soba sandwich at lunch the next day to make up for what happened, which Keima accepts before telling her to get him off the roof so he can go home.  However, the next day Haqua appears, leaving Keima dumbfounded. 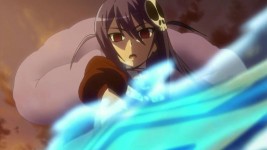 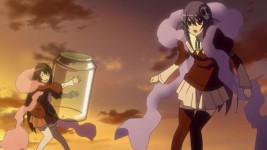 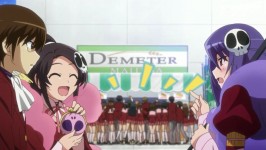 Opinions: While this was a good episode and a great way to wrap up the issue with the loose soul that Haqua had let escape, it wasn’t exactly what I had hoped for.  I had hoped that the “fight scene” between the girls would be a little bit more awesome.  Although I wasn’t surprised that the soul ended up using Haqua’s depression against her friends, it was a bit redundant to have Elcie tell Haqua over and over again how awesome she is and that nothing will ever change that.  While it was a sweet moment between the two of them, it also felt a bit lackluster (perhaps because Haqua blew Elcie off after regaining control of her body).  But alls well with the world now that the soul is captured and Haqua is on her merry way.  Or so I thought.  I wonder why she’s still hanging around Elcie and Keima.  I hope that she’s not going to try and take Keima as her partner and steal him from Elcie! D:  That’s not cool!