The synopsis for Freezing made us think of two things: hot babes fighting each other in scanty clothing and some sort of fight for humanity.  And we were right in more ways than one.  Freezing is just one of those shows that no matter how much you enjoy blood, gore and fanservice, it leaves you wanting more. 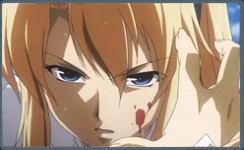 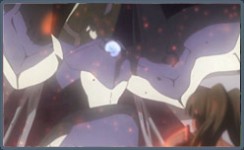 At first glance, Freezing appears to be your typical fanservice filled show with pretty animation.  And in a way, that’s exactly what it is.  The animation is shiny and the animators obviously took the time to include all of the detail to make the world seem life-like and a place you can immerse yourself in.

The expressions of the characters vary from intense to goofy, just like any other anime.  However, it’s the fight scenes that really draw you in.  Each fight is expertly choreographed and the animation is fluid and overall enjoyable to watch.  Even when the characters are not being serious, the animators are able to get their emotions across very clearly.

After being drawn in to this shiny world of hot babes and short skirts, you’re not quite as dazzled by the characters.  Bridgette, the main heroine, seems like your typical BAMF at first glance – decisive, merciless, brave, and just overall a badass.  Then you listen to her talk and your initial impressions are thrown out the window.  In reality, she’s a shy, timid girl that doesn’t like being touched by anyone and overall, not that exciting of a character.  She is accompanied by Kazuya, the overzealous boy that feels he needs to not only prove himself, but also feels that Bridgette reminds him of his late sister.  The relationship between them is rocky at best, with Bridgette constantly trying to push Kazuya away while Kazuya is constantly trying to bridge the gap between them.  This game of cat and mouse continues through the entire series and becomes quite annoying towards the end despite Bridgette eventually coming to terms about her relationship with Kazuya.  The two central characters are surrounded by several characters that are annoying and overall abrasive, and just not that great to watch in action.  Rana’s competition for Kazuya’s affection got to be quite annoying, despite the comedic relief it provides at times. 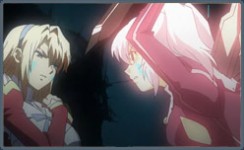 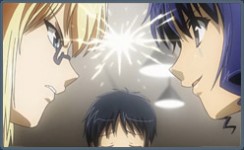 Once you’re able to get past the characters and their flaws, you get to the plot.  It starts off with a bang, utilizing the Carnival – a competition between Pandoras to test their skills – to draw you in and mesmerize you with how awesome the show can be.  You learn a lot in the first few episodes – about the Novas, the girl’s attacks, Pandora Mode and so on and so forth – but then after episode three it seems as though the animators get caught up in providing fanservice and forget the initial plot line.  We began getting bored with the Fight of the Week concept (despite every fight being expertly choreographed) and it was only once Rana appeared and providing Bridgette with competition that things began getting interesting.  However, it isn’t until the last four or five episodes that the plot is fully formed and actually brought to the viewer’s attention.  It was quite a slap in the face to see what was happening, but at the same time, it would have been nice if the plot had advanced smoothly over the course of the series and not suddenly be thrust upon us like the animators forgot about the plot completely.

The music, while pretty to listen to at first, became rather dull and overall non-expressive of the show.  It’s only once the plot fully takes off do we get new scores to listen to that actually help with the mood of the scene.  Sadly, it’s not a soundtrack that we would enjoy downloading to listen to again and again.  However, the soundtrack aside, the sound effects were spot on.  The clang of steel blade against steel – or in some cases stone or flesh – were impressive and made us wince when a character was injured because it sounded very life-like.  Unfortunately, once you get past the lackluster soundtrack and the awesome sound effects, you’re less than dazzled by the voice actors.  Bridgette’s voice actor was quite possibly the best of the bunch, being able to switch between being a badass while fighting and the timid, scared girl that Bridgette tried to disguise.  Kazuya’s voice actor was decent, although his constant shouting of “Please stop this!” got a bit annoying after awhile.  Sadly, while all of the other voice actors did their best, the lack of characterization on the script-writer’s part caused their roles to all become two-dimensional and not all that enjoyable. 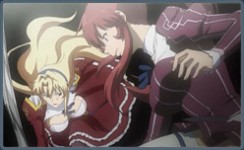 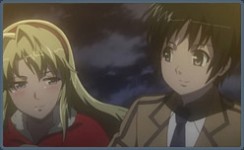 Overall, Freezing is a show that is exactly what it appears to be: hot babes hacking and slashing at each other with a decent plot and tons of fanservice. The animation is shiny and pretty to look at, the sound effects were amazing while the voice acting and soundtrack left something to be desired.  Plot-wise, it takes awhile for it to get going and the pacing is poorly done, but once you get to the final four or five episodes it really slaps you in the face.  It was an enjoyable series, but not one of the best of the season and we don’t expect it to be hailed for much more than it’s incredible amount of fanservice.  (Seriously.  We think the animators had something in their contract stating that they had to show some sort of nudity within the first five minutes of every episode.)  If you’re looking for something bloody, violent and full of hot chicks with big breasts, this is the show for you.  If you’re looking for something with more of a plot, we’d suggest giving this show a try, but don’t get your hopes up for an incredible, mind-blowing plot line.  Not that it wasn’t decent, but that’s all it will be: a decent but underwhelming, C grade show.