The 77th episode of Fairy Tail is the most shocking, impressive and darn awesome episode of the series yet. The very idea of this arc is beyond intriguing, but to make matters even more epic, we have some good old twists and surprises in this episode. It can definitely be said that this next arc is  beyond amazing. It makes me shudder to think that Fairy Tail might have ended in the Laxus arc.

Now while I’d like to comment on the little character moments trickled into this episode, I am actually not going to restrain myself and get right into the meat of the episode.

First, we had the meeting between Mystogan and Wendy. This was something that had been obvious since the flashback for me, but I’m sure it surprised quite a few people. In this very conservation, Mystogan drops a hint about who he is and why he and Jellal can both exist in the same world. This is later confirmed by Carla. 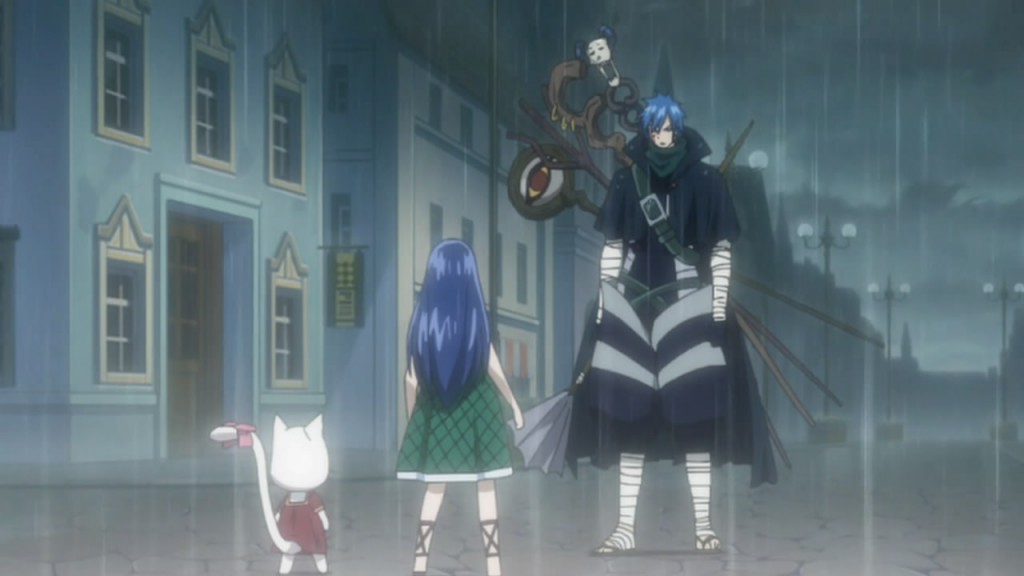 It  was fairly obvious that Mystogan was probably the Jellal from the alternate world. What is interesting is that Mystogan ventured into this world as a meare kid and was working to prevent Anima from engulfing Magnolia.  Now, I don’t know if Mystogan was doing this for personal reasons or because someone from the other world asked him, but I’m quite amazed at how only a kid was trying to save some inter-dimensional portal from openning.

It does make Mystogan all the more badass, as he has probably never been at full strength, probably because he’s been using his powers to keep Anima at bay. That said though, I guess Anima was constantly growing and expanding, and it got to the point where even Mystogan was powerless to stop it.

I wonder if Makarov knew about Mystogan’s mission, and if its somehow related to the 100 year quest. It could’ve been that Fairy Tail knew nothing though, which is more likely because they were all caught unawares of Anima and removed. Speaking of removed, I’m pretty sure they haven’t been removed from existence entirely.

My guess is that either the two worlds have kind of starting merging, or that everyone’s just on the other world, Edolas. What is interesting is that we know for sure that Natsu, Wendy and Lucy are totally okay. Now I get that Wendy and Natsu are okay because of their Dragon Slayer powers, but I wonder why Lucy is fine. It could be due to her Celestial Spirits, and her Celestial Spirit power, as she WAS able to summon all her spirits at once and even appeal to the King of Spirits.

This is definitely interesting, and a really epic way to start this arc. What better way to shake things up then pretty much obliterate Magnolia and Fairy Tail, the two things that our heroes call home. This whole idea of Alternate worlds really strikes my fancy though, its genius. 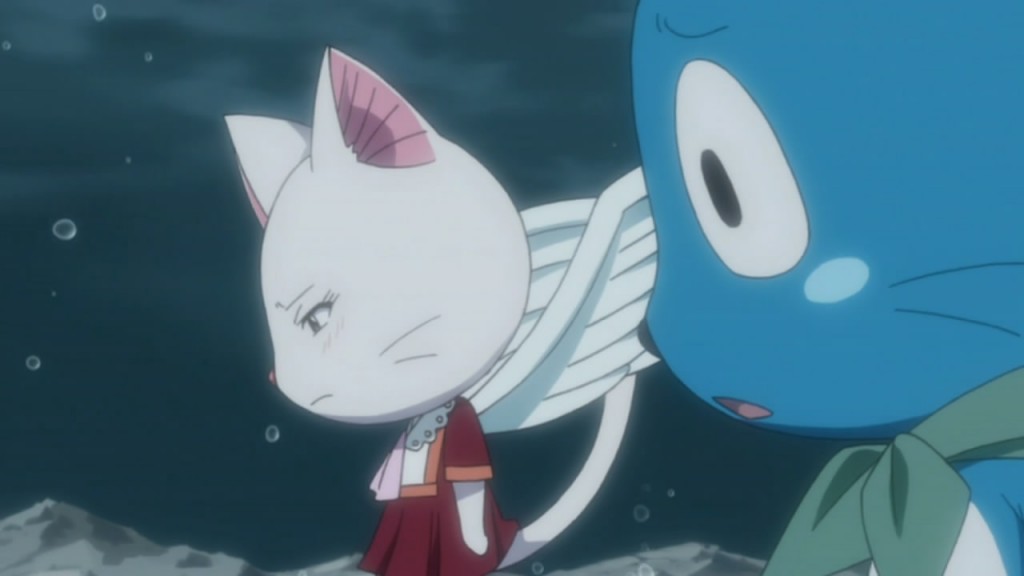 Speaking of genius, it was rather epic to learn that both Happy and Carla were actually from Edolas, and that their coming here had somehow triggered Anima. It is a very interesting notion, and a great way to end the episode. I was so totally NOT expecting them to be from Edolas or the actual reason for this arc. But I doubt they are the sole parties responsible for this. I’m pretty sure Mystogan has something to do with this.

All in all, the episode was very perfect. There were instances of big reveals, and some pretty heavy and intense stuff. At the same time we got some really great character moments and character progression.

For one thing, it makes sense why Carla is so moody and distant from everyone but Wendy. Carla’s very staying with Wendy meant that everyone else would disappear and I’m sure the guilt was really eating at her. To add to that, she then met Happy, who definitely reminded her of what she was and the fact that Happy was well… Happy and oblivious to everything, totally must have made her sad and mad.

Beyond just Carla and Happy, we got some good moments from the rest of Fairy Tail. Mira and Elfman headed out to Church for Lisanna. Of course, I was really happy to see some couple development between Gray and Juvia: 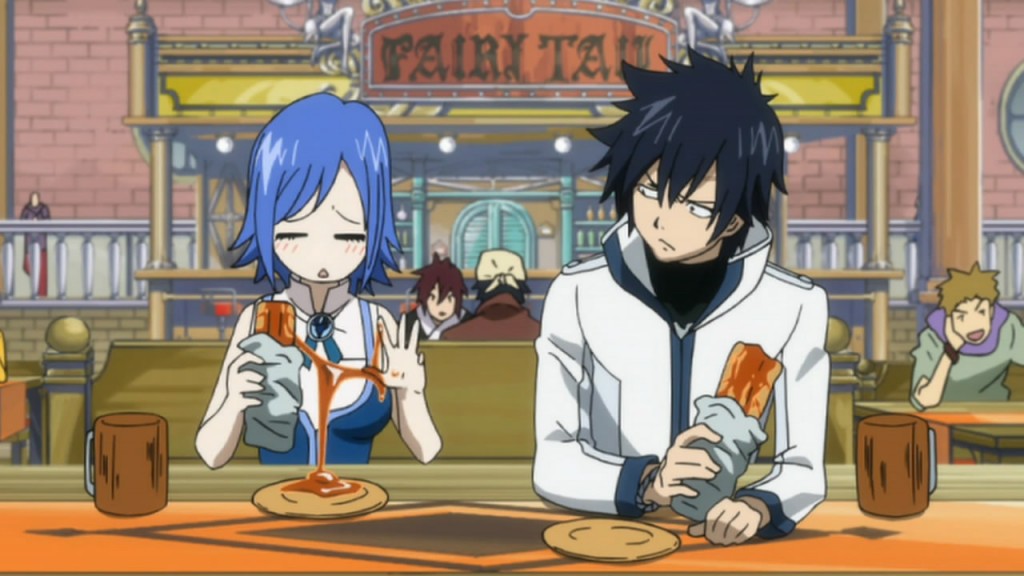 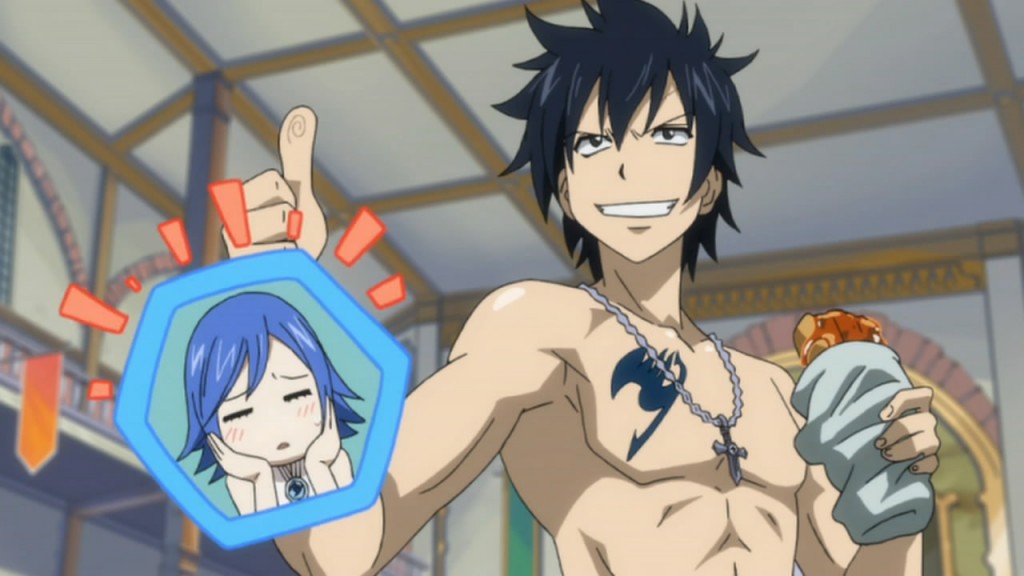 To eat a Frank, you open wide, eat it and then STRIP!

I laughed at the whole pun on the sticky thing. I totally thought Gray was being a jerk and telling Juvia she was too clingy, when in fact he was talking about her eating habit. It was definitely cute seeing him teaching her how to eat a Camerlized Frank (that sounds disgusting btw XD) and even more so to see Bisca and her guy being rather envious of their closeness. XD 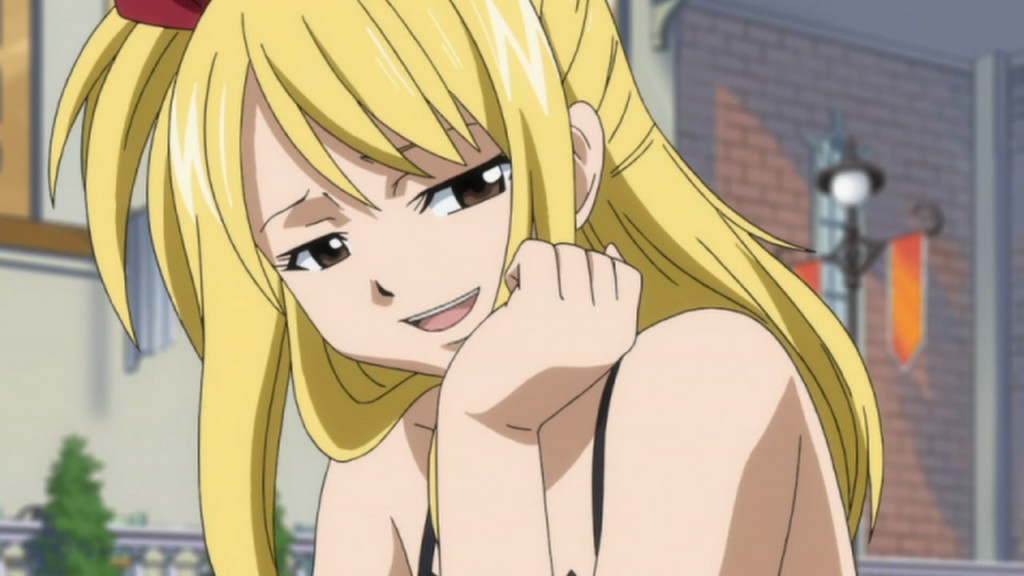 So  Natsu had a Girl Eh?

Lucy also finally learned of Lisanna and the fact that Natsu had had a girl he get along with. It was an interesting moment and Lucy’s reaction definitely showed that she hasn’t developed feeling for Natsu to the point that she’d be jealous. That makes me sad, but hey, a big part of this arc is going to be about Natsu and Lucy and their relationship to one another XD

All in all, an awesome episode! I can’t wait to see what happens next! Hell yes, Welcome Edolas arc! =D

Natsu and Wendy, along with Happy and Carla, venture into Anima and Edolas! NEXT WEEK! :O