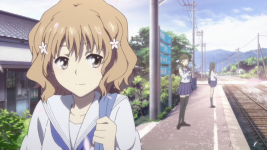 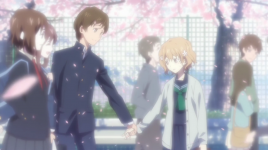 In an effort to make peace with her co-workers, Ohana tries reaching out to Minko.  Too bad all of her plans backfire.  As the episode starts off, we see Jiro cleaning a pot or urn in the lobby and is happily humming as he does so.  Ohana’s uncle then arrives and tells him that when he’s finished with that task, the courtyard needs to be swept.  However, before either of them can say much else, Ohana arrives in her new school uniform and all conversation then turns to her.  Her uncle tells her that the uniform suits her rather well but Jiro then takes it to the perverted side of things and comments on how a school girl’s uniform always brings about the purity in her.  Ohana’s uncle glares at him and Jiro scurries off, saying that he needs to sweep the courtyard or something.  Ohana’s uncle then comments on how Jiro is really good at cleaning the baths for some reason and Ohana says it’s probably because it’s combining both work and profit for him (she’s obviously referencing the erotic novel Jiro has been working on).  She then heads out, but stops at the back door of the inn where she calls for Minko to hurry up so that they aren’t late to school.  Tohru rounds the corner and tells Ohana that she looks like an elementary schooler playing dress-up in her older sister’s high school uniform.  Angry and insulted, Ohana hurriedly starts hiking her skirt up so that it’s at her mid-thigh like everyone else’s instead of at her knee.  Minko arrives and asks her what the hell she’s doing, but Ohana just flushes and tells Minko that they need to hurry up.

On the way to the train station, they meet up with Nako, who seems to be much more comfortable around Ohana.  As they’re walking, they pass by a large hot spring inn similar to the one the girls already work at.  Nako explains that it’s the only other inn in town and it’s usually in tour guides and magazines because it’s so well-known.  Ohana declares that the inn is a rival to their inn, but Minko merely tells her that that inn has been there longer than the one they live at so it’s not really a rival.  Arriving at the train station, Ohana is delighted about the cherry blossoms.  Nako laughs and says that she’s never seen Ohana this excited before.  Ohana goes on to explain that in Tokyo, it’s always so crowded around the trees when the blossoms bloom that it’s hard to see them.  She then starts to reminisce about last year’s cherry blossom festival when she and Ko were walking home from school, but she kept losing him in the crowds.  Ko finally grabbed her hand and told her to hold on to him so she wouldn’t get lost, but it embarrassed her, so he suggested they both hold on to the bag of groceries he purchased.  This memory causes Ohana to become a bit depressed as she thinks about the text message Ko sent her and his confession, but tries to play it off when Nako asks if she’s alright.  Once at school, the girls separate and Ohana prays that she’s in the same class as Minko and Nako so that she’ll at least know one person.  Her teacher then finds her (still praying) and brings her to the class.  As Ohana introduces herself, it almost seems like the class is hostile towards her, but as soon as she reveals she’s from Tokyo everyone seems fascinated with her. 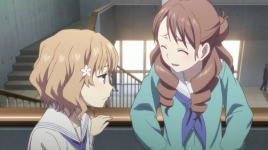 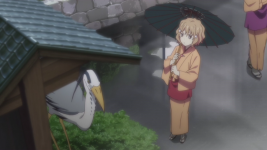 During break, Ohana notices that Minko (who is in her class) is still sitting by herself and is about to go talk to her when she gets bombarded by her new classmates with questions.  It eventually becomes people (mainly the boys) begging her for pictures of “Princess Minko” outside of class and Ohana is overwhelmed by all of the sudden attention.  She’s somehow saved by a girl with reddish brown, curly hair and Ohana thanks her once they’re in the hallway.  Turns out, this girl’s name is Yuina and she’s the heir to the hot spring inn that Ohana passed on her way to school.  Ohana asks her if she’s preparing for taking it over, but Yuina laughs and says that she doesn’t really care about the inn and only wants to live her life to the fullest.  This strikes Ohana as odd, but she drops the subject as the lunch bell rings.  During lunch, Ohana and Nako are eating together (which was adorable, I might add) when they overhear Minko asking someone what they wanted.  As it turns out, the boy who asked her to meet him on the balcony confesses his affections to her, but Minko tells him that she doesn’t like him.  He then asks her what her ideal man is like because he doesn’t want to give up on her and he can change into what she likes.  As she starts listing off characteristics, Nako’s eyes widen as she realizes who it is Minko likes but Ohana seems to be oblivious to who Minko likes and says that he must be a very nice man.  Later that day, Ohana is sitting in the laundry room trying to figure out how to respond to Ko’s text message while not hurting his feelings for not being able to return his confession right away since she’s still trying to digest how she feels about it.  Nako shows up and Ohana immediately tries to hide the fact that she was agonizing over texting a boy, but Nako ignores it and asks her to come with her on a small errand.

The errand, as it turns out, is to the larger inn down the road for the neighborhood committee.  However, on the way there, Ohana spots a large herring and is scared of it since she isn’t used to seeing it outside of a zoo.  Trying to ignore how scared she is, the two enter the inn and head for the lobby.  After Nako is able to talk to the clerk behind the desk in the lobby, a rather angry looking woman comes down the stairs and asks them if they’re from the inn down the road.  Nako is shell-shocked, so Ohana jumps in and says that they are.  The woman doesn’t say anything else and simply walks away.  On the way home, Nako decides to take a detour and show Ohana the shrine that she goes to in order to pray.  Nako then explains that she’s always been withdrawn and decided to try working at the inn in order to better herself.  Ohana seems inspired by this and calls Nako “Nakochi” because she thinks that since Minko has a nickname, Nako should as well.  Nako is surprised by this, but delighted all the same and happily agrees to think of a nickname for Ohana as well.  After leaving the shrine, Ohana decides that she should take the opportunity to try and call Minko by her nickname.  Once back at the inn, Ohana and Nako set about setting the dinner table for their guests but Nako gets called away to help with something else.  Deciding to try and be helpful, Ohana starts setting the table with the meals, but isn’t sure how to set it properly.  Cue Tohru, making a snide comment and telling Ohana to let him set the tables.  He surprises Ohana by asking her how school was and comments on how the heir to the other inn is in her class (of course, he follows this up with a snide comment that irritates Ohana).  However, before she can retort, Minko shows up and tells Ohana to go help Nako with her task and she’ll help Tohru set the tables.  Ohana realizes that Minko rescued her from having to put up with Tohru’s teasing and is grateful to her.

Later that night while in the bath, Ohana is trying to figure out a good time to try calling Minko by her nickname.  It would seem as though luck was on her side, because who walks through the door?  None other than Minko!  Deciding to start with some small talk, Ohana begins talking smack about Tohru which only infuriates Minko.  She finally snaps and shouts at Ohana, saying that Tohru may have a sharp tongue, but he’s the nicest person she’s met.  Finally, it dawns on Ohana that Minko has a crush on Tohru and splutters about it.  Minko blushes and storms out of the bath, Ohana calling after her.  The next day, Ohana tries to talk to Minko about her mistake and apologize, but Minko turns on her and starts choking her, saying that she needs to learn to keep her mouth shut.  At that moment, we hear a motorcycle and the two girls look over to see Tohru parked at the rival inn.  Confused, the girls look on and Minko becomes shocked to see Yuina run out of the inn and hop onto the back of Tohru’s bike.  Ohana looks at Minko and sees how downcast the girl is as Tohru speeds off with Yuina in tow. 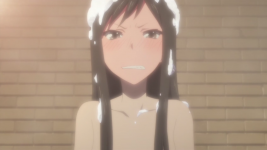 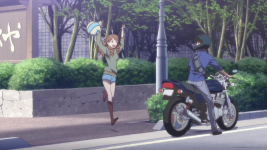 Opinions: Oh man, poor Minchi. ;3;  I honestly wasn’t expecting that ending, although I knew she had a crush on Tohru from the get-go.  I really hope that Yuina isn’t trying to steal Tohru away from the inn to work at her family’s inn by dating him (although it seems more like she’s seducing him to me).  I think that would be absolutely devastating to Minko.  But seeing Nako really open up to Ohana and show her the shrine she prays at was really sweet and I’m happy to see that the two of them seem to be bonding.  And I noticed something when Ohana pissed off Minko;  when she called her “Minchi”, Minko didn’t get upset about that or even comment on it the next day.  Maybe there’s some hope for her and Ohana becoming friends after all.