Great episode indeed. We are introduced to a very prominent character in the Fairy Tail guild…. and little else really happens. That doesn’t make this a bad episode, as it really builds on the relationship between Natsu and Gildarts. There was some Lisanna thrown in for good measure.

Before we get into the meat of the episode, I gotta comment on this: 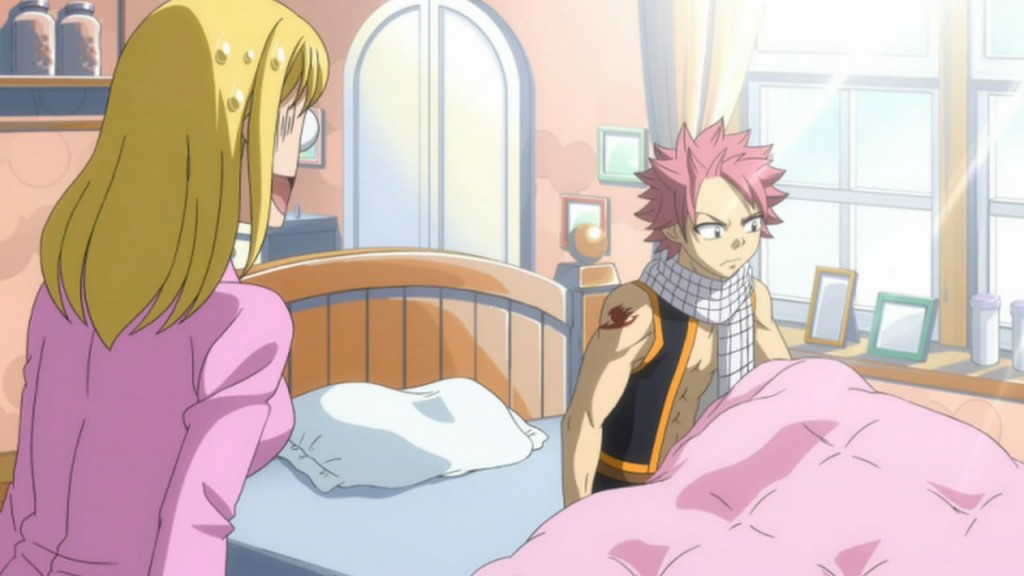 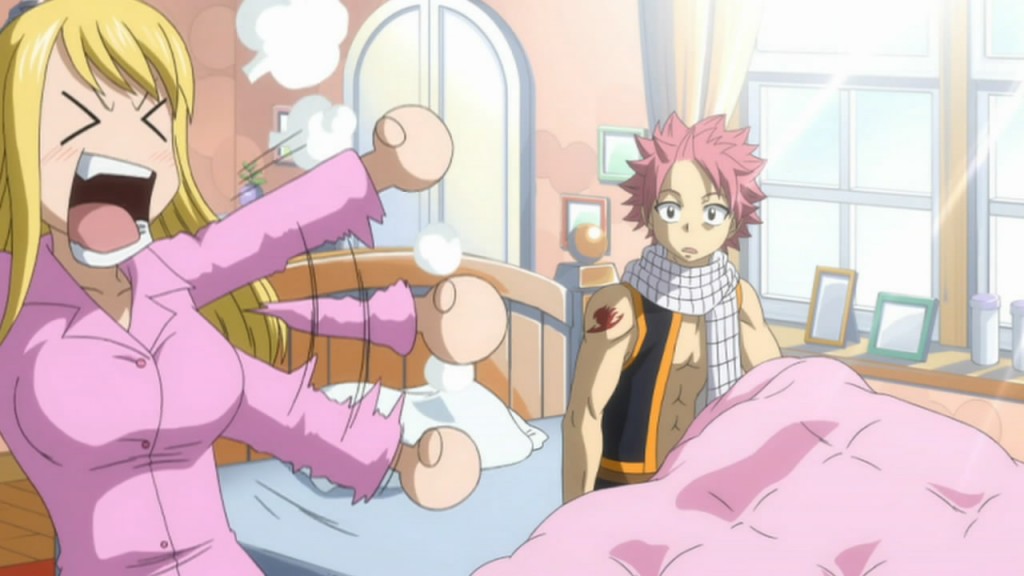 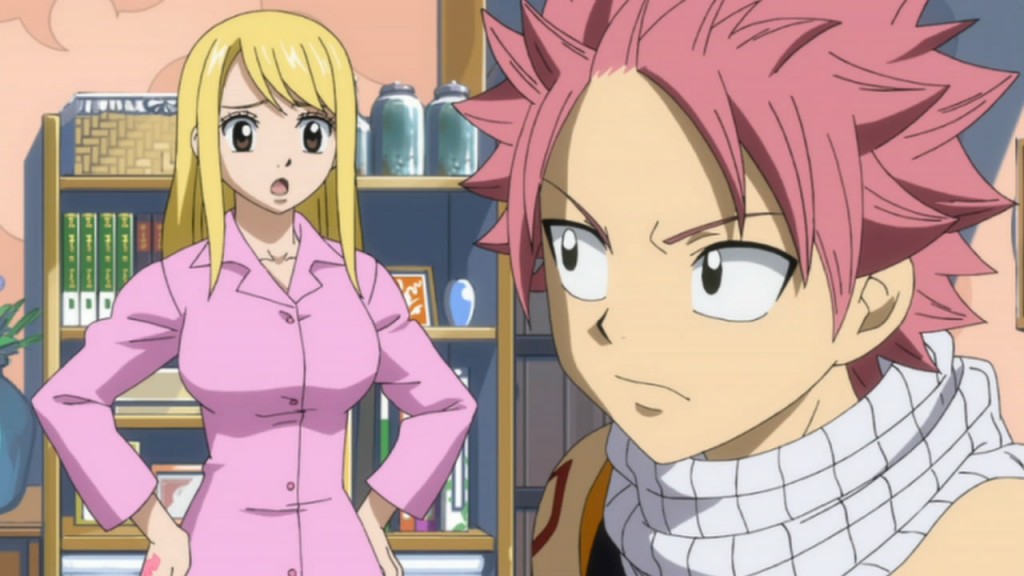 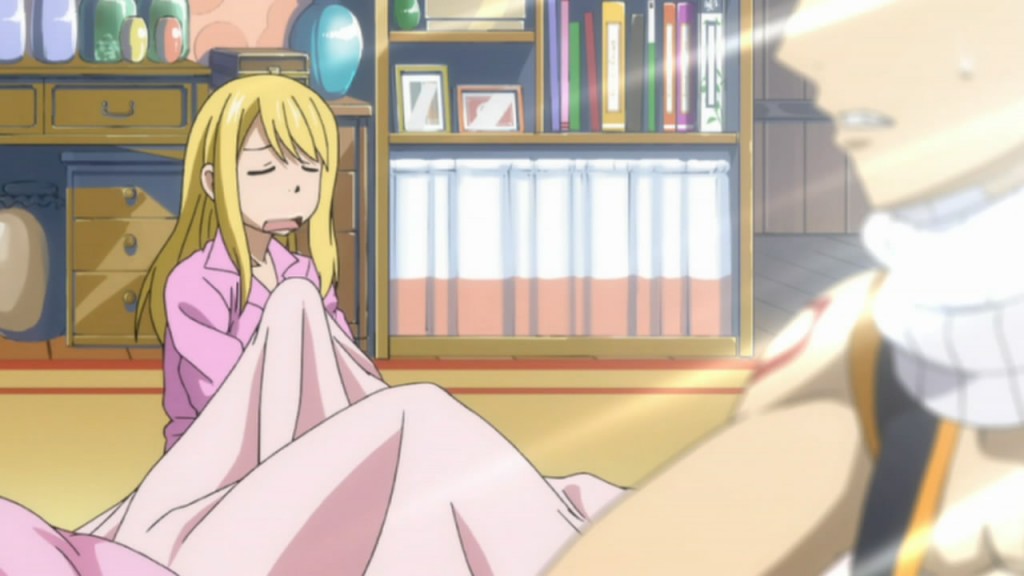 Too much… PINK O_O

I gotta say, I got some married couple vibes from this XD. Hey, stop looking at me like that… I gotta find joy in the little Natsu x Lucy moments okay! It is interesting how Natsu can get the most “comfortable” sleep in Lucy’s bed. Of course, most of the time we see Gray and Erza not far behind. I think Natsu stopping by for a “Sleep over” with Happy is a lot more common.

That aside, it was interesting how Natsu didn’t want to discuss a thing about Lisanna. I think it kind of mirrors the viewer’s opinions too. I mean, we’ve been through the whole Lisanna anguish, and while its nice to reference it, we obviously don’t want to much drama from it. I do suspect that Lucy may be, in some  ways, a replacement for Lisanna perhaps? Probably nothing as bad as that but we definitely see her as the only other girl besides Lisanna to have gotten so close to Natsu.

Lisanna was a big part of the episode, but she was more of the connecting dot between Natsu and Gildarts. Now… Gildarts. He was pretty awesome. I gotta say though, beyond just character design, he kinda acts a lot like Shanks from One Piece. The personalities aren’t totally same, but there’s so many parallels that its hard to ignore. First of all, Gildarts also has a limb lost, and then there’s the whole father like figure thing that he has going on with Natsu.

If anything, it was really nice to see that Natsu was able to get some time with Gildarts while he was growing up. Gildarts definitely put some good in him, and made him into what he is. 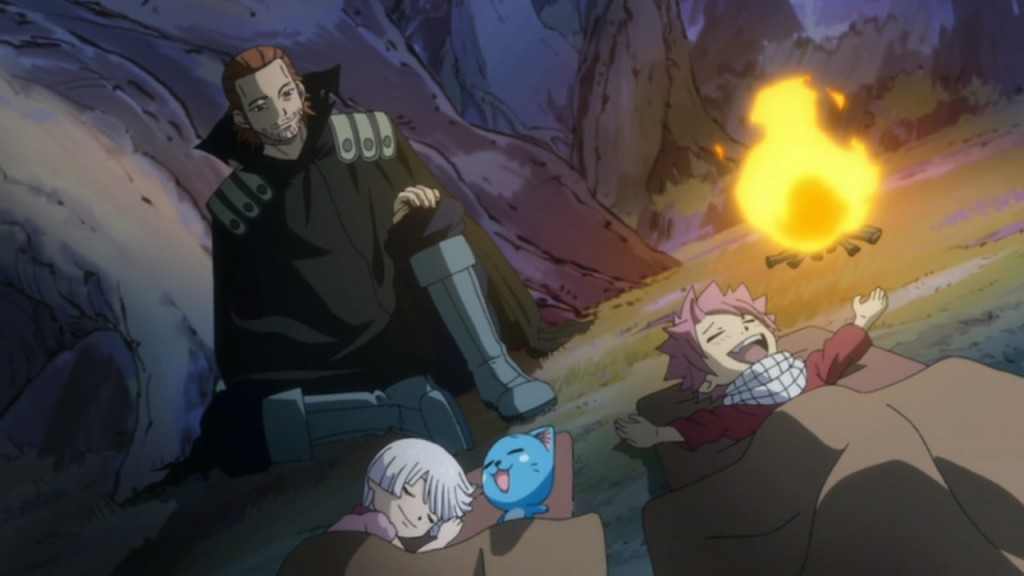 This episode also really foreshadowed  a few things. The fact that Fairy Tail now has 3 legit Dragon Slayers is something Makarov had been foretold by Patrichuka. Something is definitely going to happen with regards to the Dragons, even if its not in this arc.

All in all, a great start to the arc. I’m interested to see where things go from here!

Gajeel looks for a cat since he feels left out and… Wendy meets Mystogan. All of that epicness, next week! =D