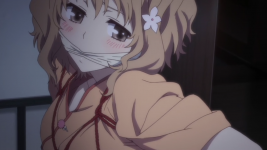 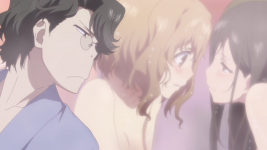 This week, we’re treated to not only a bit of camaraderie between Ohana and the rest of the staff at the inn, but we also find out why the well-known author in the Wave Room is such a jerk.  The episode picks up where last week left off, but instead of finding Ohana, we see Minko and Nako preparing for their shifts at the inn.  Minko is muttering about how “die” seems to be too harsh to say to Ohana, but she needs to figure out the best way to tell Ohana how much she hates her.  Nako and Tomoe are bringing breakfast to the guests when Nako informs Tomoe that the guest in the Wave Room said that he won’t be needing breakfast that morning.  Irritated, Tomoe suggests that she and Nako share the man’s breakfast, but Nako says that she can’t because she’s trying to mentally prepare her mind and stomach for what Ohana is making for breakfast.  Tomoe seems confused, but doesn’t push the matter.  Later, Minko and Nako meet up and start heading towards the staff’s dining room while steeling themselves for what’s ahead.  Here, we find out that Nako is actually scared of Ohana because she’s not used to people having such loud voices and being so straight-forward when talking to people.  When the duo finally reaches the staff dining room, they’re shocked (and in Minko’s case) angry that Ohana is nowhere to be found.  Minko slams her fist on the table, saying that Ohana betrayed her and she’ll be yelled at for not preparing the staff’s breakfast again, but Nako gasps and starts panicking when she sees a large amount of taro (her least favorite food).  Minko then notices a large amount of spinach sitting on the counter, ready to be prepped and realizes that Ohana wouldn’t just up and leave in the middle of cooking.

Meanwhile, Ohana is being held captive in the Wave Room, the author having bound and gagged her.  However, he appears to be having trouble figuring out how to do the turtle shell bondage knots, so Ohana tries helping him out by showing him where he needs to begin (I’m not sure why though).  This causes the man to cripple under his own shame and he admits that he’s not a well known author or even that talented.  Ohana tries to console him and he eventually unbinds her and allows her to read the novel he’s been working on.  Here, we find out that not only is it a romance novel, but the three leading ladies are Ohana, Minko and Nako.  Ohana seems a bit embarrassed about it, but quickly becomes indignant when she reads a line saying that her voice is loud.  Meanwhile, downstairs everyone is looking for Ohana and becoming worried that she ran off (Nako even goes so far to say that she feels terrible for being so mean to Ohana), but Ohana’s grandmother shows up and tells them to begin cleaning the inn since there are no more guests arriving that afternoon.  Everyone still seems worried about Ohana’s disappearance, but goes about their duties. 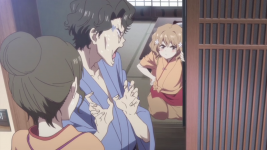 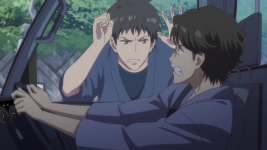 Later that afternoon, while Ohana is still trying to help the author with his work, Nako knocks on the door of his room and tells him that she’s been sent to clean his room.  He yells at her, telling her to go away and this infuriates Ohana, who shouts at him, thus making her presence known.  Jirōmaru (the author) then starts to panic and pulls Nako into his room, saying he’ll have to bind her as well.  However, at that moment Tomoe and Denroku arrive and Jirōmaru then flees the room, leaving everyone surprised.  After he flees, the staff is summoned to Ohana’s grandmother’s office for a small meeting, in which everyone is furious that Jirōmaru had been lying to them about who he was and how poorly he treated the staff.  Ren suggests throwing him out, but Ohana’s grandmother says that she will never doubt a customer and won’t do anything like throwing him out until she is able to speak to him herself.  Jirōmaru overhears the whole conversation and ends up stealing the inn’s truck and speeds away into town.  The staff (including Ohana’s grandmother) all pile into the inn’s van and speed away after him.

After what can only be described as a hilarious pursuit, they manage to catch up to Jirōmaru at the beach and they find him standing on a semi-large cliff overlooking the sea.  The chefs try to tell him to come down because it’s dangerous, but Jirōmaru seems determined to end his life because he feels terrible for taking advantage of Ohana’s grandmother’s trust and goodwill.  Ohana interrupts him, saying that he has to be joking because there’s no way her grandmother is that nice to anyone (Jirōmaru protests, saying that she ruined the mood).  After hearing a few of the staff say something, Jirōmaru decides to throw himself off the cliff, but then starts shouting that he doesn’t want to die.  Nako then jumps off of the cliff and rescues Jirōmaru (she has been taking swimming lessons since she was 3 years old) and pulls him to safety.  Once they’re sure everyone is safe, Ohana approaches Jirōmaru and tells him that he shouldn’t give up on himself and that she wants to sparkle, which is a line from his novel.  Minko and Nako seem confused by her odd choice of words, so Ohana tells them about the novel which embarrasses the hell out of them.  After a stern talking-to, Jirōmaru agrees to work for the inn to help pay off his debt while working on his novel to try and win the prize he was aiming for.  Ohana catches up to Nako afterwards and applauds her amazing swimming skills, but Nako seems a bit timid about it.  However, she opens up and offers to teach Ohana how to swim, which Ohana happily accepts.  Before heading back to the inn, the chefs decide to stop and make dinner on the beach using the ingredients that they purchased while pursuing Jirōmaru.  Minko seems a bit upset that there’s spinach in the stew, but Ohana seizes the opportunity to serve Minko her punishment and is delighted when Minko begrudgingly eats it.

Later that night, as Ohana is getting ready for bed, she finds a notebook hidden under Minko’s covers and finds out that Minko has been putting some serious thought into what insult she should use other than “die”.  Smiling, Ohana realizes that it’s kind of refreshing to be hated so much.  She then gets a text message and thinking it’s from her mom, starts grumbling, but she’s happily surprised to find that it’s from Ko.  He texted her to apologize for not seeing her off and to wish her luck on her new adventures.  Meanwhile, her grandmother is praying to what I’m assuming is her late husband, saying that Ohana is just like their daughter but that she thinks she’ll do well at the inn. 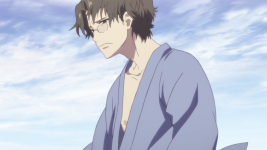 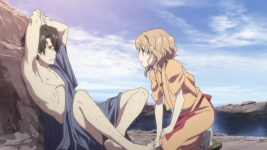 Opinions: I definitely wasn’t expecting this for an episode, but was happy with it none the less.  Jirōmaru turned out to be quite the bishie, but unfortunately it was ruined by the fact that he’s a sniveling crybaby.  Why do all the cute guys have to be babies?  I was a bit surprised that Minko has been putting that much effort into hating Ohana, but now I’m just curious as to why she hates her so much.  However, I was really happy with Nako for extending an olive branch to Ohana, even if it was just for swimming lessons.  Maybe if Nako and Ohana can become friends, it’ll be easier for Minko and Ohana to get along.