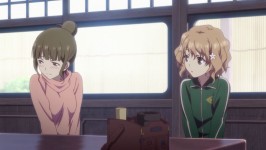 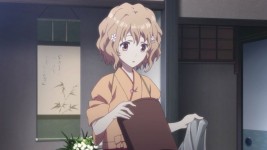 After last week, I’ll admit I was a bit worried about how things would turn out for Ohana.  What I wasn’t expecting was for things to blow up this much.  The episode starts off with a small flashback to when Ohana was in grade school and it was Parent’s Day.  Apparently, her mother promised her that she’d show up but never did, making Ohana feel both humiliated and angry.  When she confronted her mother about it, her mom simply told her that she shouldn’t rely on anyone other than herself.  Ohana seems to have taken this to heart over the years and wakes up before anyone else (including Minko) and is outside cutting the grass.  She’s still angry about what happened the previous day, but is channeling her anger into attempting to learn what it means to work hard at something.  Tomoe rides up on her scooter and commends her on working hard at 5:30 in the morning, but Ohana’s grandmother appears and tells her that she isn’t cutting the grass short enough.  As she walks away, she tells Ohana that if she’s going to do something, to do it right the first time, which angers Ohana even more.  Her grandmother ignores the dirty look Ohana shoots her and instead tells her to follow her to her office.  Once there, Ohana is surprised to see Nako there as well and learns that she is to be trained as a waitress.  Nako seems worried about training Ohana and meekly protests, but Ohana’s grandmother simply states that since Nako was trained by Tomoe, she is the only one competent enough to train Ohana.  At this point, she dismisses the two of them and doesn’t seem to care that Tomoe is uncomfortable with training Ohana.

Afterwards, the two girls are changing into their waitress uniforms when Ohana comments that she’s jealous of how graceful Nako is (she also mentions how Nako doesn’t seem to waste a single motion when putting on her uniform).  This embarrasses Nako and she hurries to finish putting on her uniform so that she can escape the locker room.  Once out of the locker room, Nako and Ohana set about cleaning the rooms that they are assigned.  As Ohana steps into their first room, Nako quietly tells her not to step on the track that the door slides on, although it’s so quiet that Ohana almost doesn’t hear her.  When Ohana asks why, Nako turns away and says “Because.”  Not exactly the best answer ever, but whatever.  Ohana and Nako then go on to clean the room with Nako quietly giving Ohana directions when she notices that she’s not doing something properly (like taking the sheets off of the futons to be washed before putting the futons away).  After few mishaps, the girls finish cleaning the room and are about to start on the Wave Room – a room that Tomoe told Ohana is rumored to house a rather famous author – but Nako is called on to help with something.  Ohana asks if she can do anything while Nako is gone, but the girl tells her to stay put and not touch anything.  Annoyed by not being given a chance to prove herself, Ohana decides to get started on cleaning the Wave Room without Nako’s help or instructions. 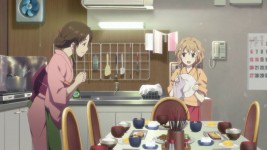 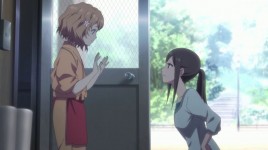 Once done cleaning the Wave Room (which went without a hitch despite it being rather messy) Ohana is heading downstairs to take out the trash when she hears shouting coming from the kitchen.  Curious, Ohana sneaks closer to investigate only to find Minko being yelled at by the sous chef Tohru for burning the protein for the guest’s breakfasts.  It turns out, because of this, the cooks won’t have enough time to cook breakfast for the staff, which the head chef seems to be a bit disappointed in.  Ohana quickly sneaks away and after taking the trash out, decides to take it upon herself to cook breakfast for the staff since there isn’t anything else for her to do.  When the chefs were about to tell Ohana’s grandmother that they couldn’t prepare breakfast for the staff, they’re surprised when Ohana tells them to come into their dining room.  Minko seems extremely angry that Ohana made breakfast for everyone (I think that she believes that Ohana did it out of spite) and storms out of the room without eating anything after Tohru teases her, saying that Ohana’s cooking may be better than hers.  Ohana rushes after her, wanting to know what her problem is, but Minko tells her to die.  Again.  Ohana tries explaining that she was only trying to help, but Minko doesn’t want to hear it and storms off.  Unfortunately, Ohana’s bad luck doesn’t seem to be stopping anytime soon.  As she heads back inside, she hears some shouting and goes to investigate, only to find the author that is staying in the Wave Room is throwing a fit because someone threw away his drafts when cleaning his room.  Since Ohana was the one to clean the room, she’s summoned to her grandmother’s office while they question her, but she denies throwing away anything that wasn’t already in the trash can.  Her grandmother seems to believe her, but tells the client that she’ll send her staff to look for it.  Some time later, Tohru comes outside and tells Ohana to help him go to the store and bring back supplies for the kitchen.  Since Ohana isn’t given a choice in the matter since Minko has run off and she’s the one Tohru usually gets to help him.

On the way to the store, Ohana decides that she really doesn’t like Tohru much because not only is he making fun of her for not having and friends (she objects, but starts thinking about Ko and gets depressed again) and starts wondering what would be the best way to make him realize that she doesn’t like him.  Deciding to try Minko’s choice word, she tells Tohru to die.  This surprises him so much that he nearly swerves into oncoming traffic, scaring the shit out of both of them.  When he pulls off to the side of the road, Ohana realizes what she did and apologizes profusely before telling him that she needs to go back to the inn to do something.  As she runs off, Tohru sticks his head out of the window and shouts at her, asking what he’s going to do about the supplies (she tells him that he’ll figure something out).  On her walk back, Ohana reflects on how she’s been acting and realizes that she’s been incredibly selfish, but is still angry at how everyone is treating her.  She then remembers that when she was angry at her mother, she cooked her a ton of her least favorite food and felt better once her mother ate all of it.  Deciding that that would be the best course of action, she hurries back to the inn in search of Minko and Nako.  She finds them upstairs and corners them, telling them that they need to help her and she’ll be better about communicating and working with them instead of trying to do everything on her own.  Minko and Nako are confused at first when Ohana asks them what their least favorite foods are, but Ohana finally forces it out of them.  Before leaving, she tells them that she’s going to prepare their breakfast the next day and she expects them to eat all of it.  The next day, she’s preparing breakfast and as the soup is simmering, she decides to take the trash out.  Unfortunately, it turns out that she had been putting the trash in the bin for things that aren’t used very often (Tomoe points that out to her) and as she moves the trash from the previous day over to the actual trash bins, she finds the drafts from the day before and decides to take a peek at them since no one is around to see.  As she reads, she’s happy to discover that the main character’s name is the same as hers but as she continues reading, she realizes that it’s actually an erotic novel.  As she looks up, she sees the author standing there, muttering “It’s not my fault” as he advances on her. 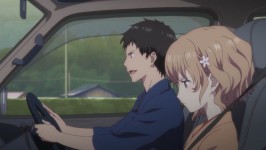 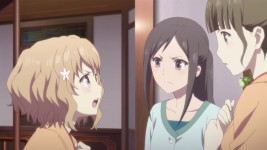 Opinions: This is another excellent episode and really shows Ohana’s progress in adapting to her new situation.  Although she’s still angry about what’s happened, it’s clear that she’s been trying her best to work on her attitude and work ethic.  I’m hoping that through her tutoring with Nako, the two girls can be close, resulting in Ohana and Minko eventually becoming friends of sorts.  Although I’m confused as to what’s wrong with this author, I hope he doesn’t do anything bad to Ohana!  And why the hell hasn’t Ko contacted her yet?  And even though things blew up between Ohana, her grandmother, Minko and Nako, I have a feeling that things will settle down between them soon and will eventually go back to normal.