Another very impressive filler. Despite the fact that this was essentially a recap episode of sorts, the episode had some really nice moments and was a very touching, cute little episode in itself.

Rather, the small recap of what has happened so far was actually quite nice. It was a nice,  refreshing recollection of what had happened, and really does prepare us for what is going to happen in big arc thats coming up. This was a nice little addition to the past arc where we got some great Natsu development.

I did get some Natsu x Lucy vibes from this arc, even though it seems like the series may or may not go in this direction. I really hope the issue of pairings is addressed in this series, particularly for Natsu and Lucy. I’m hopeful we will get some development on this front. It was rather cool to see Natsu so glum over the fact that Lucy had missed the event that she had been looking forward to so much.

And as usual, Natsu and Happy did something rather extreme to make her happy. It was an expected act, but it didn’t make the scene any less touching: 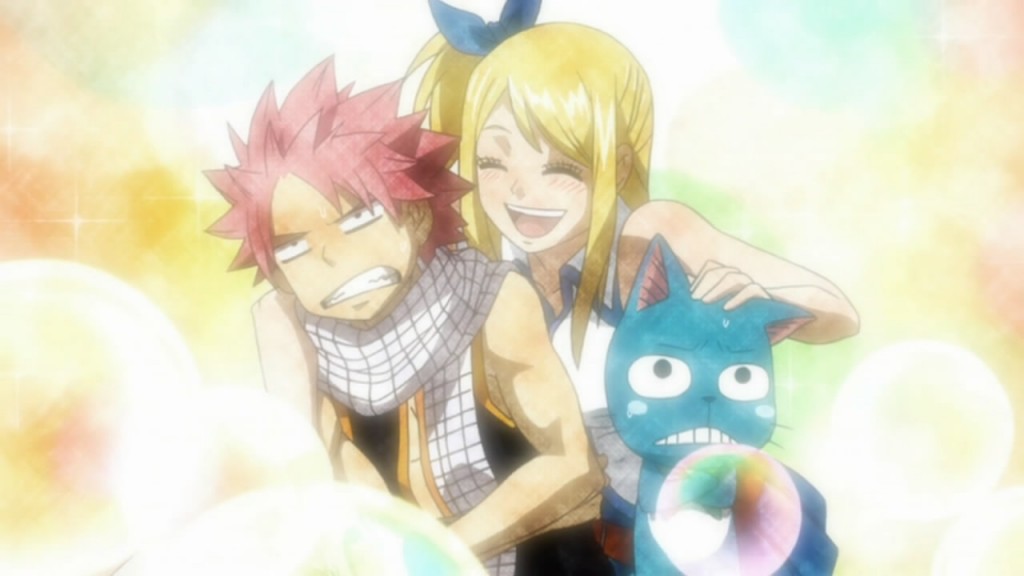 I definitely enjoy the special friendship that these three share. Natsu, Erza and Gray may be the strongest team, but I feel that Natsu, Happy and Lucy are the most cool trio in Fairy Tail. I kind of wish we’d get some more adventures with just the three of them rather than the whole gang.

All in all, a pretty sweet episode. Definitely, a nice relaxing and touching episode. Bleach, Naruto… THIS is how fillers are done. XD

I have to say, DaisyxDaisy is to Fairy Tail, what UVERworld was to Bleach. The songs they do are definitely some of my favorite and really do give Fairy Tail a distinct feel and flavor. Really Awesome stuff. I loved the song, and the animation? Wow have I got some stuff to discuss regarding that XD

I’ve gotten some clues as to what the next arc is going to be about. It seems that the story is going to revolve around two realities. One where Natsu is quiet, sort of shy one and there’s a very tomboyish Lucy beside him. There is definitely going to be some criss cross. Beyond that, we’re also going to get some awesome stuff between Mystogan and Wendy, and even Charles and Happy will have their moments.

Added to that, there’s even reference to Natsu’s childhood, some father figure that really resembles Shanks from One Piece, and of course, Lisana. I’m guessing Lisana is still alive in the other reality or something. Regardless, the very prospect of all this awesome stuff has me so darn EXCITED!

Best OP… ever! Its definitely a great song, and the animation has me super curios for what’s going to happen. Epic job, DaisyxDaisy!

I also loved the new ED by “ShaNa”. This was another beautiful, moving song that really does give a feeling of “its ending by I want more” feeling that Fairy Tail’s recent EDs have been giving. Its a really pretty song.

The animation is a bit generic, given that its actually got Charla as the centre of it. That was a rather odd choice, but it was probably done to avoid any big spoilers for the characters that are about to appear in the next arc.

All in all, this was an equally awesome ED theme, and definitely ranks as one of the best songs Fairy Tail has to offer. I really do wonder who is behind the music choices in this series, said person is a genius! The overall music for Fairy Tail is outstanding!

Wendy tackles her first job, with Freed along for the ride? Also, Erza goes through some weird personality change? Next week! =D