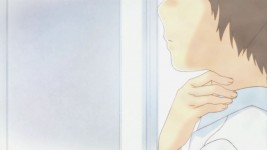 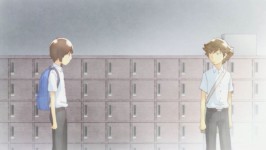 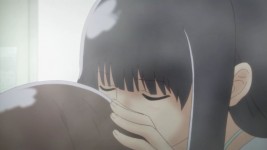 In the finale of this wonderful show, we get a lot of closure – both in terms of plot and emotions – and learn that things aren’t always as they appear.  The episode starts off with Shūichi, still in the nurse’s office, thinking back to when Makoto warned him that their voices would be changing soon, thus making them unable to dress as girls anymore.  Shūichi is apparently concerned about this, but tries not to let anyone else notice this.  Later that afternoon at practice, Doi begins adlibbing, making fun of Shūichi’s script before telling him that it’s too stiff.  Shūichi considers this before asking Doi for his help with the dialogue on their way out of the school.  Doi asks if Shūichi still hates him, to which Shūichi says yes, before getting angry and saying that Shūichi shouldn’t be asking for his help if he hates him so much.  However, despite being angry, Doi agrees to give Shūichi a hand with the script.  Before Doi can get his hands on it later that week, Saori takes a look at it and tells Shūichi that it’s a lot better than the original script.  She then admits that she wishes that her class was doing a play because they’re stuck doing a boring city project and she also doesn’t want to be stuck in a group with Chizuru, but she is.  She hurriedly invites Shūichi over after school, saying that she has some new dresses she wants to show him and that they can invite Takatsuki over as well.  Shūichi agrees and walks home with Saori.

When they arrive at Soari’s house, she pulls out all of her new dresses and Shūichi is blown away by how pretty they are.  Saori asks him if he’d like to try it on and he says yes, but then admits he wished he had brought his wig with him.  Saori tells him that she has a hair piece and helps him put it on.  She then confesses that she always thought he was special and wished that she could have told him sooner.  Shūichi seems unable to process this and – almost as if it were divine intervention – Takatsuki shows up.  Saori and Takatsuki have a stand off for a few minutes before Saori tells her to try on a dress.  Angry, she does (by throwing it on over her jeans and hoodie) before saying that it looks funny.  Now that the tension is gone, the two girls then focus their attention on Shūichi and playing dress-up with him.  Later that week, Doi is visiting Shūichi in the nurse’s office, looking over the script, when he mentions that Shūichi should come back to class because people are starting to think it’s odd for him to stay in the nurse’s office all day and return to class only for practice.  Shūichi apparently agrees with him because the next day he returns to class, much to Sasa’s enjoyment and things seem to go back to normal. 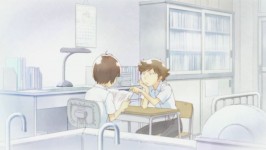 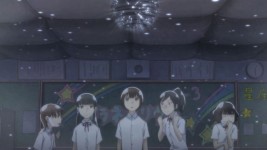 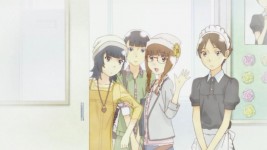 The next week, the cultural festival is in full swing and we find out that Maho’s class is doing a genderbender maid cafe; all of the men will be wearing traditional maid uniforms while the girls will be wearing slacks and dress shirts.  Meanwhile, Makoto and Shūichi are on the roof and Makoto admits that he’s always been jealous of Shūichi because he was always cute.  Just as he’s about to run away, Shūichi calls out to him and tells him that he’s always thought that Makoto was cute.  This flatters Makoto, but just before he can say anything, Doi shows up and tells them that Chizuru and Saori were looking for them.  Makoto sneaks away because the group is visiting his classroom’s function.  When they get there, Makoto and Takatsuki surprise them by displaying a wishing star and having the group make a wish.  Shūichi initially contemplates wishing for his voice to stop changing, but then decides to wish for the success of the play.  Afterwards, they head back to their classroom to finish preparing for their play.  While they’re preparing for things to get started, we see Maiko and her friend trying to persuade Anna to come visit Maho at the cultural festival.  Anna doesn’t want to because she’s still afraid that Maho is angry at her for dumping Shūichi the way she did, but Maiko ends up dragging her to the festival anyway.  Maho eventually sees Anna, but before she can say anything, Anna manages to escape and runs off.  However, instead of escaping all together, she runs into Shūichi in the classroom.

Anna and Shūichi go out into the courtyard to talk for a little bit before Shūichi has to finish getting ready for the play.  Anna apologizes for dumping him the way she did and that she didn’t mean to say all of those mean things to him.  Shūichi says that it’s okay and that he still loves her.  This flusters Anna and she splutters, saying that he shouldn’t say things like that so bluntly.  While they continue talking, Saori and Takatsuki are watching from above and Saori comments that she thought Shūichi was special, but he’s really just like every other boy.  Takatsuki disagrees, saying that Shūichi is special, along with all of her other friends.  Saori scoffs at her before sticking her head out the window to shout at Shūichi, telling him he needs to get ready for the play.  Shūichi waves to her before saying his goodbyes to Anna and returning to his classroom.  A little while later, when everyone is back stage getting all of the final preparations done, someone asks Shūichi to give her her line again.  He does so, but the girl comments that his voice sounds funny.  Startled, Shūichi brings his hand up to his throat, but then realizes that it’s okay and reassures the girl that he’s fine.  At the end of the episode, he steps out on to stage amidst all of the applause. 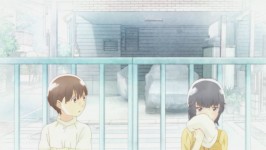 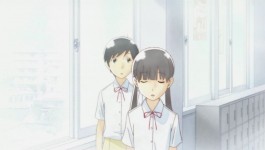 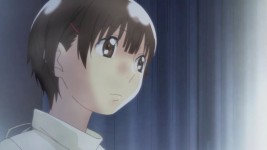 Opinions: This was a really nice ending to a really nice series.  The animators made sure to wrap everything up nicely, including Shūichi’s apprehensions about maturing and changing into a man.  We got to see a bit more of the inner workings of Makoto and even though he told Shūichi that he was jealous of him, it was a sweet moment between the two of them.  Saori’s pseudo-confession to Shūichi was touching, yet sad at the same time since there was a bit of longing in her voice as she told him that.  All in all, it was a wonderful ending to this show since it wrapped everything up really nicely and addressed a lot of the questions I still had remaining.