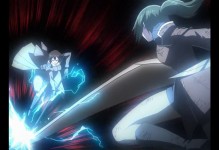 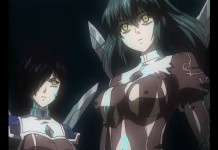 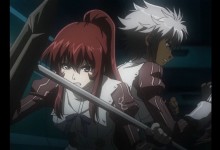 With only one episode left in the series, I’m kind of surprised that they decided not to advance the plot much further. As a short recap from last week, Cathy and the other enemy Pandora who had entered NOVA Form (thanks in part to the Nova that absorbed them) managed to infiltrate the building housing the Holy Corpse. Picking up from last week, we get a brief glimpse of the teachers fending off the Nova and see that the first squadron are finally receiving backup. As the two teachers and the remaining Pandora face off against the Pandora, we head to the control room where Sister Margaret has returned in order to monitor the progress of the enemy. Now that we know what the enemy is after, Margaret is increasingly nervous as they continue to advance towards the first line of defense. Just before the enemy find their way towards the third years defending the floor (consisting of Ingrid, Atia, Creo and Arnett) Margaret mentally notes that they haven’t completed their research on the Holy Corpse. She then goes on to say that if the Holy Corpse is taken, humanity will perish. I love how optimistic she is about the whole situation.

Meanwhile, Ingrid and the rest of the defense squad sense the enemy approaching and readies themselves for battle. When the enemy Pandora reach them, their Limiters quickly launch a Freezing attack, momentarily halting their progress. However, it seems as though Cathy has another ace up her sleeve; she unleashes a Freezing of her own, nullifying the one deployed by the Limiters. Now that they are no longer restrained, they get the Limiters out of the picture before focusing on Ingrid and the others. Ingrid and everyone are able to stop all but two enemy Pandora – Cathy and her teacher – from advancing, but Margaret pipes up on their broadcasting system to tell them not to follow Cathy, but to keep the other Pandora at bay. Further up ahead, Cathy and her teacher run into Elizabeth – the second ranked Pandora in the third years and the girl Bridgette defeated in the beauty contest – and Elizabeth makes quick work of them by delivering a blow to the enlarged stigma on their chests. Once she does this, Cathy begins glowing red and somehow melts a hole in the floor and escapes down to where Bridgette and everyone else is waiting, by-passing the other lines of defenses that were set up. 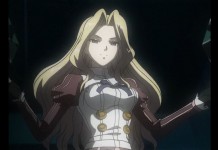 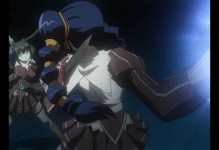 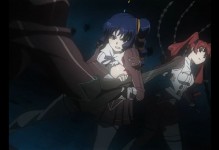 While all of the fighting is going on, Bridgette, Ganessa and Rana are discussing the Holy Corpse. Bridgette seems to know the most about it (perks of being part of the Bridgette household, I suppose) and surprised Ganessa and Rana by being so talkative. However, their little get-together is interrupted by Cathy falling through the ceiling. Unfortunately, none of the girls move fast enough due to their shock and Rana is targeted by Cathy and a split second later, she’s pinned to the wall – blade through her shoulder – about thirty feet above the ground. Ganessa and Bridgette are shocked (Bridgette more-so because she wasn’t expecting Cathy to be the enemy) and do absolutely nothing while Rana manages to free herself. Bridgette stands there and watches Rana and Ganessa fight – as a side note, here we find out that Ganessa isn’t capable of doing any Accel techniques and Rana tells her to get out of the way since she’ll just be a burden – but Rana and Ganessa are quickly taken out of the picture, leaving only Bridgette to fight against Cathy. Bridgette tells Kazuya to stay back and that she doesn’t need him before drawing her weapon and launching an attack against Cathy.

Bridgette is easily over-powered by Cathy and despite Kazuya’s attempts to help her, she continues to push him back, shouting at him and saying she won’t be a replacement for his sister. She then fuses with her stigma, unleashes her Wings of Light and improving her speed, strength, etc. However, even in this form, she is unable to get the upper hand against Cathy and is beaten back. When Cathy uses her Freezing against Bridgette, Kazuya jumps into the fray and nullifies it with a Freezing of his own. Here, Bridgette finally – finally – realizes that he wasn’t trying to replace his sister and truly wants to be her partner. She then resolves herself to do the Baptism with him once everything is over and peace returns (if that ever happens). However, just as she realizes this, Kazuya is thrown to the side and Cathy pins Bridgette against a wall. Before she is able to deliver the final blow, she hesitates. It appears that she’s fighting against the Nova’s control and is able to beg Bridgette to stop her before she hurts anyone else before the Nova’s control is reinstated. However, before Bridgette is able to help her, Cathy screams and a blinding red light engulfs the room. Meanwhile, Ingrid, Creo and the others find Elizabeth collapsed on the floor, seemingly defeated. Turns out, she didn’t exactly defeat the teacher like she thought and she escaped. The last thing we see is her drilling a hole in the wall and setting her eyes on the Holy Corpse. 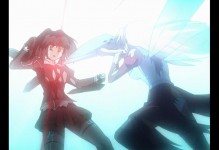 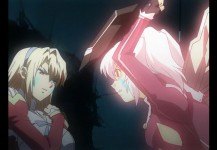 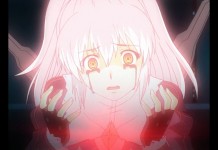 Opinions: While they didn’t exactly progress the plot much, they advanced it just enough to leave us on a cliffhanger. The fight between Bridgette and Cathy was interesting to say the least, especially if you consider their past. Bridgette’s acceptance of Kazuya was touching, although it’s kind of sad to think that being faced with a life-or-death situation was the only reason she realized she truly needed him. Although now that the enemy has reached the Holy Corpse, I can only imagine the shit that’s about to go down. And what happened to Cathy? Did she really die or did she finally defeat the Nova’s control over her? Sadly, we’ll have to wait until April 7th to find out what happens; Freezing’s finale was pushed back in light of the tsunami and earthquake, as well as the Spring 2011 season starting on April 2nd.