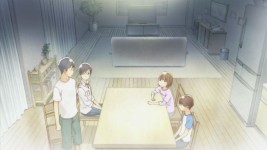 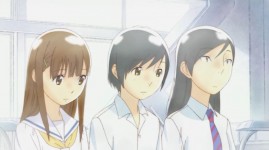 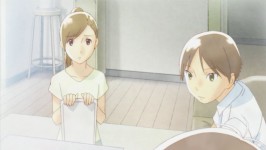 We start off where we left off last week: Shūichi shows up at school dressed like a boy, surprising the faculty.  However, we’ll get to what happened in a minute.  First, we see Shūichi, Maho and their parents sitting at the table discussing Shūichi’s cross-dressing.  His mother – as most mothers would be – is in denial and asking Shūichi if he was bullied into doing it or if he lost a bet or something.  Angry with their mother’s refusal to accept this, Maho shouts that it’s his hobby and he wasn’t bullied into it.  At this point, their father stands up and asks Shūichi to go to the convenience store with him.  On the way home, Shūichi quietly listens to his father as he tells Shūichi how his grandparents were betting against one another about whether or not Maho would be a boy or a girl.  Apparently Maho’s cries were so loud when she was born that Shūichi’s grandmother was so sure that she was a boy that she was flabbergasted when she lost the 10,000 yen bet to her husband.  Shūichi’s father then goes on to say that the opposite was for Shūichi; he was quiet when he was born and everyone thought that he was a girl when he obviously isn’t.  His father then wonders aloud if they made a mistake with their children (I think he means that he wonders if Maho should have been a boy and Shūichi a girl).  However, other than this small conversation, nothing else is said by Shūichi’s parents.

The next day, Maho stays home from school – blaming a headache that Shūichi caused – and said that it would be his fault if she never returned to school.  Shūichi appears to be going to school, but when we see Takatsuki and Sasa talking at school, we find out that Shūichi never showed up.  Instead, he and Maho’s boyfriend visited Yuki.  Yuki asks why there were skipping school and Maho’s boyfriend reveals that Shūichi dressed as a girl at school and is now being bullied.  Yuki is shocked that Shūichi actually went through with it and wonders how it will affect Shūichi’s education.  Frustrated, Shūichi tells her that he won’t go to school unless Maho does because it’s his fault that she’s getting teased in class.  He then goes on to wonder why it was okay for Takatsuki and Chizuru to dress like a boy, but it’s not okay for him to dress like a girl.  He then admits that everyone told him that he looked cute dressed up like a girl which made him think it was okay for him to go to school like that, but then wonders if he was being too conceited.  Meanwhile, Takatsuki is worrying about Shūichi and thinks that it’s not fair that he had his parents called and was sent home when she and Chizuru didn’t have anything done to them.  Unfortunately, she realizes there isn’t much she can do aside from staying by Shūichi’s side.  Meanwhile, on the other side of town, we see Maiko and Anna in class and Anna is worrying about Shūichi and Maho.  Maiko asks her if Shūichi is really her boyfriend, going on to ask if she ever felt like kissing him or wanted to have sex with him.  Embarrassed, Anna tries changing the subject, but it eventually does back to Shūichi and Anna admits that he probably isn’t really her boyfriend and that she doesn’t want to lead him on, but she doesn’t want to make him any more upset than he already is. 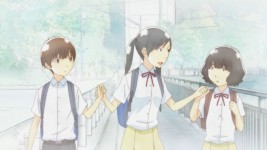 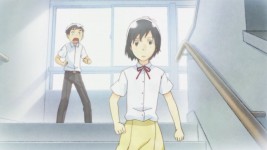 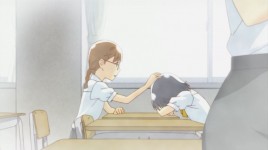 The next day, Shūichi is attempting to stay home from school again when Chizuru and Momo show up to escort him to school.  On the way there, Chizuru notices that Shūichi is feeling uneasy about going to school so soon after the incident, so she grabs his hand (and Momo’s) and proceeds to try cheering him up.  It seems to work, if only a little, but when they get to school Shūichi is called a tranny by his classmates and Momo tries telling Chizuru not to hang out with Shūichi anymore because he’s “a freak”.  Of course, she says this right in front of Shūichi and you can tell that it hurts his feelings.  Makoto shows up shortly after that and the two of them head to class, only to find the other students holding the classroom doors shut so that Shūichi can’t enter the classroom.  Makoto asks if Shūichi wants him to go get a teacher, but Shūichi says that it’s okay and he’ll head to the nurse’s office and call his mother to have her pick him up.  Makoto seems worried about Shūichi, but lets him go without saying anything else.  Shūichi’s mom comes to pick him up shortly after that, but not before Takatsuki was able to give him a note.  In the note, it has Takatsuki telling Shūichi that she admires him for being so strong and for not flinching despite the other people making fun of him.  A quick time-skip later and it’s just before the cultural festival.  While the class is trying to decide what to do, someone suggests doing another genderbender play since it was a lot of fun before.  Sasa tries arguing against it, but majority ruled and the class decided on a play again.  Shūichi is then asked to write another script, since he did so well the previous year, and he agrees.  Saori and Sasa suggest that he uses his original script since they didn’t get to last year.

Another time jump later, it’s during summer vacation and Shūichi is hard at work at his new script.  Saori and Sasa are lending him a hand when needed, but for the most part he’s revising his original script.  That afternoon, we see Maho and her boyfriend walking down the boardwalk towards where fireworks will be going off when Maho suddenly confesses to him.  He’s surprised, but obviously flattered, and Maho asks if she can call him by his given name.  He agrees, but is embarrassed when she tells him to call her by her given name as well.  Here, we get a very short look at the inner-workings of Maho’s head; she knows that Shūichi is getting bullied and doesn’t like it and knows that her boyfriend isn’t happy about it either.  So I guess she’s not a total bitch like I thought and really does care for her little brother.  She just doesn’t show it that much.  That night, Shūichi is working on his script and watching the fireworks from his window while thinking about how Anna asked if they could just be friends.  She goes on to say that she’ll be supportive of him and was wondering if he’s done any research for when he grows up.  He doesn’t seem too upset about it, but maybe he’s internalizing everything?  Yet another time jump and we find ourselves after summer vacation and just before the play is about to start.  Takatsuki finds herself being confessed to, but she turns him down (the boy’s friend yells at her, calling her “stupid” and “a man”).  Saori tells her to get used to it since she’ll probably get confessed to a lot more.  Meanwhile, Shūichi is leaving practice for the play when Doi shows up and asks to walk him with him.  As they walk, Doi asks if Shūichi is dressing like a girl and says that it should be okay for him to do so outside of school.  Angry, Shūichi turns on Doi, saying that he did it for himself and he won’t ever dress up as a girl for someone else ever again.  In a rush of adrenaline, he goes on to say that he hates Doi before running off, shocked that he mustered up enough courage to tell him off.  A day or two later, the family’s relative Maho and Shūichi had visited in the previous episode came to visit and asks Maho and Shūichi to stand up next to one another.  As it turns out, Shūichi grew a lot during the summer and is now taller than Maho, which is a surprise to both of them. 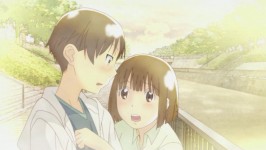 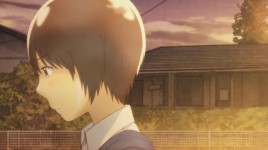 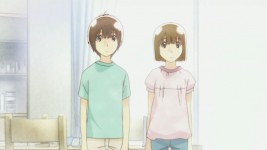 Opinions: Even though they had to edit episodes 10 and 11 into one episode in order to finish the series on time before the spring season starts, you really couldn’t tell.  A lot happened, but it wasn’t paced so poorly that it felt rushed.  Shūichi finally learned to stand up for himself (which admittedly made me cheer) and we found out that deep down, Maho really does care for her brother.  It was sad that Anna and Shūichi broke up, but it didn’t exactly feel like they were dating if I’m being perfectly honest.  It felt more like they were shopping buddies or something.  However, it was a really great episode with lots of stuff going on!  I’d like to see the unedited versions of these two episodes, just to see what they had to cut out, but I suppose I’ll have to wait for the DVD release to do that.