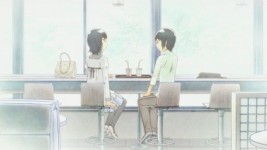 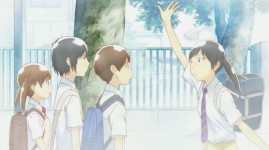 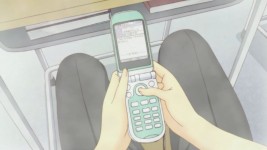 After what I thought was a week-long hiatus in light of the earthquake in Japan (apparently I was wrong; Wandering Son aired the day before the earthquake but I thought it had been pushed back along with every other show) we return with this wonderfully insightful show.  As the episode starts off, we see Takatsuki getting ready for school, but wearing her boy’s uniform instead of her usual one.  As she’s getting ready, she remembers how she spoke to Anna about whether she’d be able to still spend time with Shūichi and how Anna said she was funny and that she didn’t mind.  Regaining a bit of confidence, Takatsuki heads downstairs to breakfast and we overhear her mother’s shocked exclamation that she isn’t wearing “the correct” uniform.  Takatsuki tells her mom that it’s fine because there’s someone else in the school who does it too.  Although I’m sure her mom is still a bit perturbed by this, she lets Takatsuki go to school in the boy’s uniform.  Upon arriving at school, Takatsuki meets up with Shūichi and Sasa and is nervous as they approach the teachers that greet the students every morning.  Miraculously, she’s able to slip past the teachers without them noticing.  Unfortunately, Chizuru then shows up and begins exclaiming that Takatsuki is incredibly cool, thus drawing unwanted attention to the group.

Later that day, Takatsuki is called to the teacher’s office to get a book for roll call (or something along those lines) and one of the teachers stops and asks her if she’s a girl.  When she says yes, he asks her if she has something against the girl’s uniform.  After a moment of silence, she exclaims that she hates it, although I think she doesn’t have much against it.  The teachers excuse her and nothing else is said for the rest of the day about her outfit.  Meanwhile, Shūichi and Makoto are in their usual spot during lunch when Takatsuki runs up and shouts at Shūichi, asking him out on a date.  He initially says that he already has plans, but Takatsuki says that it’s alright and they’ll have to hang out some other time.  As she runs off, Makoto comments on how cool Takatsuki is, but Shūichi doesn’t hear him because he gets a text message that visibly surprises him.  Makoto asks if it was from Anna, but he says no and puts his phone away. 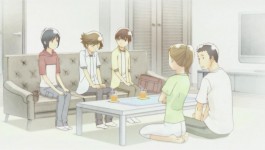 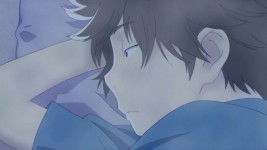 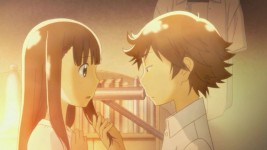 After lunch, Shūichi is secretly texting whoever texted him at lunch – which turns out to be Doi, the boy who used to bully him – asking if Shūichi can introduce him to the “pretty chick” that he saw Shūichi with the previous week.  Shūichi texts him back, asking how Doi got his number and Doi responds saying that his sister is friends with Maho.  He then goes on to say that they should meet up on Sunday to meet up with Yuki.  Shūichi reluctantly agrees.  On Sunday, Shūichi is about to leave to meet up with Doi when he sees Takatsuki on his doorstep.  Turns out she had called Yuki to see if she would like to hang out and found out that Shūichi was going to be stopping by, so she decided to meet up with him first.  They meet up with Doi at the train station, Doi asking why Takatsuki is there.  She states that she’s Shūichi’s bodyguard, but Doi is annoyed with her answer and doesn’t say much else.  Once they arrive at Yuki’s apartment, she asks what Doi wants with “an old tranny” like her.  It takes a moment for the words to sink in, but Doi realizes that Yuki was actually a man at one point.  Yuki seems rather angry that Doi forced Shūichi to bring him to her apartment, but thanks him for telling her that he thought she was pretty.

Later that night, Doi contemplates why Shūichi and Takatsuki are friends with Yuki and decides to confront Shūichi the next day after school.  He finds out that Shūichi cross-dresses and asks him to dress up for him after school.  Shūichi does so and Doi tells him that he’s incredibly cute and that he should dress like that for school one day.  Shūichi is startled by the idea, but begins to seriously contemplate it when they’re visiting a relative a few days later.  He ends up visiting Chizuru at her family’s udon shop and asks for her advice.  In a surprisingly mature way, she tells Shūichi that she doesn’t think that he should dress as a girl at school because he’ll get a lot of unwanted attention and could be bullied.  However, she informs him that it’s his decision to make, but warns him about what could happen if he does so.  Despite taking her advice to heart, Shūichi has already set his mind on dressing as a girl at school one day and stops by Takatsuki’s house to ask if he can borrow her school uniform.  Upon finding out that Doi was the one who suggested it, she refuses to let him bully Shūichi into doing something he doesn’t want to.  Shūichi denies that Doi is forcing him, saying that he only wants to do this because he feels more comfortable about himself pretending to be a girl.  That night, Maho comes home from a photo shoot and gives Shūichi a hairpin from Anna, saying that Anna has a matching one.  She scoffs at the idea, but doesn’t say much else.  A few days later, we see Shūichi arrive at school, wearing the school uniform we saw in the first episode (the sailor-esque one) along with the hairpin that Anna gave him.  His teachers notice him, wondering if they got a new transfer student before recognizing him.  When they ask whether he’s Shūichi or not, he confirms that he is. 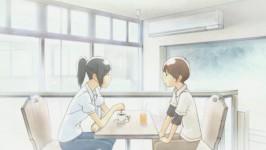 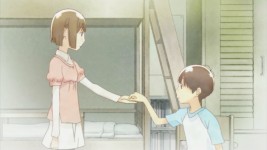 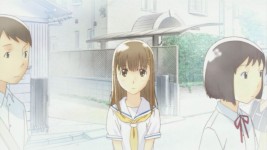 Opinions: Definitely one of the best episodes thus far.  I loved getting to see a more mature side of Chizuru instead of her annoying squealing and such that she usually does at school and how she was willing to give Shūichi advice.  Takatsuki was really cute as she defended Shūichi, although I wish he had listened to her and not dressed as a girl at school.  I honestly have a bad feeling about what will happen now that he’s shown up at school dressed like that and I hope that nothing bad will happen to him.  Although I’m curious about how we’ll see the effects of this since the animators have edited episodes 10 and 11 into one half-hour episode in light of the earthquake and delays in broadcasting and the spring season fast approaching.