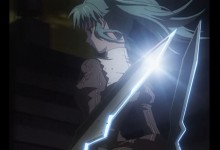 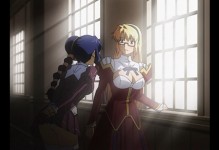 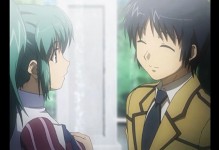 We’re now revving up for the series finale and damn does it show it!  The episode starts off with Kazuya and Sister Margaret at East Genetics, watching the training of their top third year student, Cathy Lockehart.  We later learn that Cathy received three of Kazuya’s sister’s stigma, but she’s planning on retiring right after graduation.  Kazuya is shocked to hear this and asks why she’s retiring since she has such a bright future as a Pandora.  Cathy admits that she only became a Pandora because her father asked her to, but her dream is to become a writer.  She laughs, saying that it’s a silly dream to have, but Kazuya says it’s a wonderful dream and says that he’s excited to read her first novel.  However, before Cathy can say much else, Kazuya and Sister Margaret are shuffled off towards the helicopter to bring them back to West Genetics.  Meanwhile, we get a brief look at Bridgette, who is thinking about the night at the dance and wishing that Kazuya were there.  Rana shows up and teases her about it, but makes sure to reiterate that she plans on stealing Kazuya from Bridgette at some point.  Back at East Genetics, Cathy and her teacher are talking about Cathy’s option to become a teacher at Genetics, although Cathy refuses the offer.  She admits that she’s not fit to be a teacher or a leader of the cavalier because she isn’t brave like a Pandora should be.  Her teacher is confused by this, but Cathy then reveals it’s because of an incident with Bridgette that she had over a year ago.

It turns out, that the night Bridgette beat the shit out of the Limiter that tried to get close to her, Cathy found Bridgette and tried to stop her.  Cathy was scared for the first time since becoming a Pandora because of the look in Bridgette’s eye and how she wouldn’t stay down.  Cathy admits that she could never match the level of determination Bridgette showed that night and three third years ended up subduing her.  However, because of that incident, Cathy doesn’t feel that she has the qualifications to become a true Pandora, which is why she wants to retire right after graduation.  Her teacher seems to understand this, but before she can say anything, an alarm sounds throughout East Genetics.  Meanwhile, Kazuya and Sister Margaret are on their way back to West Genetics and Kazuya comments on how it’s a shame Cathy wants to retire, but that it’s her life and she should live it how she wants to.  Sister Margaret then comments on how Cathy has the highest ratio of compatibility with his sister’s stigma (a 90% compatibility rate, which is unheard of).  Kazuya then learns that his sister was able to take twenty stigma implants and after the 8th Nova clash, some of her stigma was donated to other Pandora entering the academy.  Shocked, Kazuya then finds out that Bridgette had received six of his sister’s stigma, although she only has a 5% compatibility ratio with them. 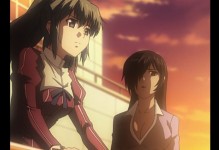 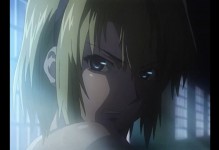 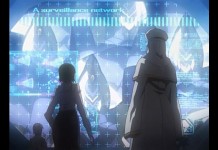 Once they arrive back at West Genetics, Sister Margaret is whisked off to the battle room while Kazuya is left to fend for himself.  Arriving in the room overseeing any battles, we find out that not one, but four Nova’s have appeared at East Genetics and are making their way towards the school.  They contact East Genetics and give the go-ahead for initiating battle with the Nova’s.  While this is going on, we see Cathy being summoned along with the other third and fourth years to be briefed on their plan of attack.  She looks nervous about the fight since she has no actual fighting experience.  Meanwhile, Kazuya is found by Kaho and Arthur and he tells them he already knows what’s going on.  He then goes on to explain how he found out that Bridgette had been implanted with six of his sister’s stigma, which explains why he thought it was his sister when he first saw her.  Kaho asks if that’s the only reason he wanted to be her Limiter and he admits he isn’t sure because he acted on impulse.  Something draws his attention to the gate nearby and he spots a large load of burgers on the ground; Bridgette had overheard everything.

While all of the drama between Kazuya and Bridgette is going on over at West Genetics, at East Genetics the Pandoras are moving into position to strike the Nova’s.  They manage to successfully expose it’s core and Cathy speeds ahead and utilizes her Quadruple Accel to get within striking range of the Nova.  Unfortunately, the Nova is able to knock her away, even while she’s moving at such speeds.  The Nova then unleashes a particle beam, which no one had ever seen before, and decimates the Pandora’s squads.  Cathy is left standing alone, only to be grabbed by the Nova.  We learn that the Nova is fusing with her stigma and despite Cathy’s efforts to get away, she’s unable to and is then absorbed into the Nova’s body along with several of her comrades and her teacher.  Everyone at West Genetics is floored because they had never seen anything like it before and are unsure of what to do. 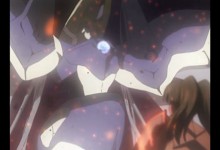 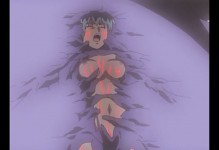 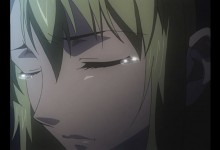 Opinions: HOLY CRAP, THIS WAS EPIC!  I’m sorry I ever doubted the series!  The fact that Kazuya now knows that Bridgette has his sister’s stigma implanted in her has brought about some indecision and worry on his part while Bridgette is devastated that he only wanted to be her Limiter because she reminded him of his sister (as far as we know anyway).  I’m wondering if this will put a strain on her relationship with Kazuya and if she’s called to the front lines to fight the Nova, will this impede that in any way?  And what about Cathy and the others?  What is the Nova going to do now that it’s absorbed everyone?  OH, THE QUESTIONS!  I’m so pleased to say that this is turning out to be exactly what I thought it would be: an awesome, action-packed series with a powerful plot.  Now that we’re getting ready for the finale, all I can do is hold on for the ride and hope for the best.