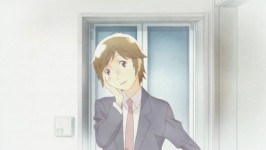 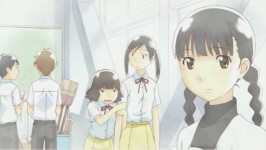 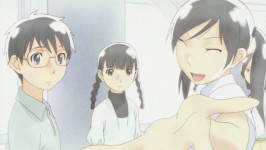 As expected, this episode focuses a bit more on Makoto and his troubles than any of the other characters and that’s something I’m totally okay with.  With the series halfway over, it seems as though we’re making good progress in the plot, but the animators are still taking the time to deepen the characterization of even seemingly minor characters.  This week, the much anticipated cultural festival is upon us!  You know what that means?  That’s right!  Shūichi and his class are finally going to put on the play that they’ve been working so hard on.  The episode starts off with a look at Yuki, Takatsuki’s friend (who we now realize is actually a man) getting ready to go to the school and see the play.  As he tries to figure out how to do his hair, he remembers the time when his mother took him suit shopping when he was in high school and looks a bit depressed for a moment before realizing that with his hair the way it is, he looks like a male escort.  Meanwhile, Shūichi’s class is preparing for their big day by putting some finishing touches on the props and rehearsing their lines one last time.  Saori has already changed into her costume, presumably so that she won’t have to rush later on, and Chizuru runs up to her, shouting about how cool she looks.  Makoto looks on in awe, murmuring that Saori really does look pretty cool in her outfit.

At this point, Fumiay enters the classroom, exclaiming about how cool Saori looks in her costume.  Saori demands to know what he’s doing, saying he’s not allowed inside the classroom while they’re preparing for the play.  He feigns being hurt by her words, stating that she invited him (she counters by saying she only invited him because she needed to fill her quota) and he then presents her with a bouquet of flowers.  She accepts them, but tells him to never do something like that again because it’s annoying.  As a way to change the subject, Fumiya asks who is playing Juliet and Chizuru bounces over, declaring that Makoto is playing Juliet.  Fumiya absently comments that he thought Shūichi would be playing Juliet instead and although Makoto doesn’t show it, you can tell he’s upset about this as he leaves the classroom.  Later, Shūichi finds Makoto on the stairwell and tries comforting him.  Makoto confides in him that he’s worried about not doing Juliet justice, but Shūichi tells him that he’ll be a wonderful Juliet.  He then suggests that they get something to eat before the play but Makoto says he’s not hungry because he’s too nervous about the play.  They then decide to visit the haunted house and possibly get some of their nerves gone before the play. 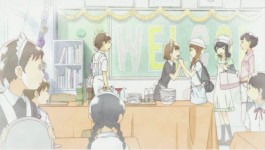 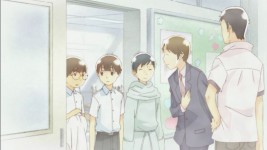 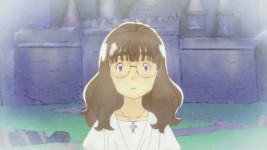 Meanwhile, we see Sasa and Takatsuki walking down the hall after visiting several of the food stands.  Takatsuki tells Sasa she shouldn’t eat so much before the play but Sasa comments on the fact that she wants to fill up her whole card before the end of the festival.  Takatsuki laughs before the duo spots the haunted house and decides to go inside.  While everyone is enjoying themselves, we get a peek at Maho’s class, which is doing a maid cafe.  They seem fairly busy, although Maho is sulking in a corner because she didn’t want to pose for the poster.  She said that people are only visiting their cafe in the hopes that Maiko and her other modeling friends will show up.  As a surprise to everyone, Maiko, Anna and Maho’s other modeling buddy shows up, causing Maho to shout their names.  Anna is annoyed with her because they were in disguise and didn’t want to have to sign autographs, but ended up having to anyway.  While all of this is going on, Shūichi and Makoto finally find themselves at the haunted house.  They enter, somewhat afraid of what’s going to happen, but are quickly disappointed because it’s not as scary as they thought it would be.  Makoto is really disappointed because, as he put it, he was ready to scream his lungs out to get ready for the play.  However, just as they’re about to leave, they hear Sasa, Takastuki, Chizuru and Momo in different parts of the maze and Makoto decides to scream while running through the maze to try and scare the girls.  The girls realize what they’re doing and join in, effectively spooking the class running the haunted house in the process.

As the group exits the haunted house, Chizuru runs straight into Maiko and proceeds to have a massive fangirl attack.  After declaring her love for Maiko, they usher her back to their classroom to begin getting ready for the play.  As everyone is changing, Takatsuki notices Yuki and Shii standing outside her classroom door.  She runs to greet them with Shūichi and Makoto in tow; she introduces them and Yuki asks who’s playing Juliet.  When Takatsuki says that Makoto is playing her, Yuki seems disappointed that Shūichi doesn’t have the role (again, you notice Makoto becoming upset about the comparison).  Later, the play is about to begin and Makoto becomes so nervous that he flounders his opening lines.  Saori comes on stage to give him some encouragement and the play proceeds smoothly from there.  Afterwards, when everyone is cleaning up, Saori gives Makoto the flowers Fumiya gave her earlier, saying that someone asked her to give them to Juliet.  This makes Makoto happy because he thinks that someone really thought he was a good Juliet.  Afterwards, we see everyone heading home with their family, although Makoto is annoyed with his mother’s teasing. 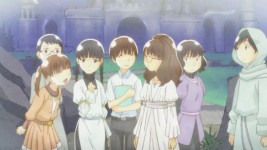 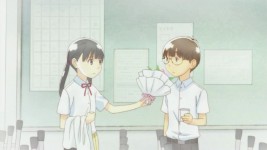 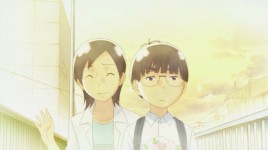 Opinions: I was really looking forward to this episode and they definitely didn’t let me down.  It was a very sweet episode and I loved getting to see the inner workings of Makoto and how he deals with the pressure of school.  I do wish I could have seen more of Takatsuki and Shūichi, but I’m still happy we got to see more of Makoto, who usually gets very minimal screen time.