What a tease! Its been so long since I’ve seen Durarara!! and this episode was a huge reminder of why I loved the series so much. In many ways, this episode felt like either a Season 2 Episode 1, or the real ending to the series. There were some new characters introduced, but the plot was largely the same, with everyone doing what they generally do.

I guess you could call Epiosde 25 a real love letter from Studio Brain’s Base, to the world of Durarara!! and its characters. In many ways, this episode is very reminiscent of Baccano!’s extra three episodes, except that it really does give you a sort of ending at the end, making you feel like the tale has really wrapped up. Not that this was even needed, as episode 24 was a pretty solid ending for what its worth.

That said, I loved the various character moments in the episode. It was nice to peek back into the world of Durarara!! after the events of the series. Anri and Mikado are still slow in their couple development, and it was pretty funny seeing them fumble around each other. The real highlight of the episode though, was undoubtedly Hanejima Yuhei. The way he just changed his roles on the fly and changed the show as well, was just too darn funny to pass up. It was undoutedly showing just how good of an actor he was, but the total lack of cohesion made it extremely hilarious.

We went from a couples hunting show, to an occult spotting show, to a show about Simon’s restraunt, to some kind of catastrophe report. Added to that, the various comments from various characters through the day were awesome. While I disagree with Erika about Taiga and Yuuji, simply having her mention them was nice, especially given how Durarara!! managed to have some manner of cameo for Anime stuff like that.

I was also just impressed by how they managed to cramm literally every character from the series into this one episode, and give them a minute or two of screen time. They even proceeded to introduce two new characters, namely, Izaya’s two younger twin sisters. I was beyond surprised to know that Izaya even HAD sisters, and how they’d kind of be a dangerous to him as  an information broker. Then we got to see what they were capable of, and those fears were quickly laid to rest: 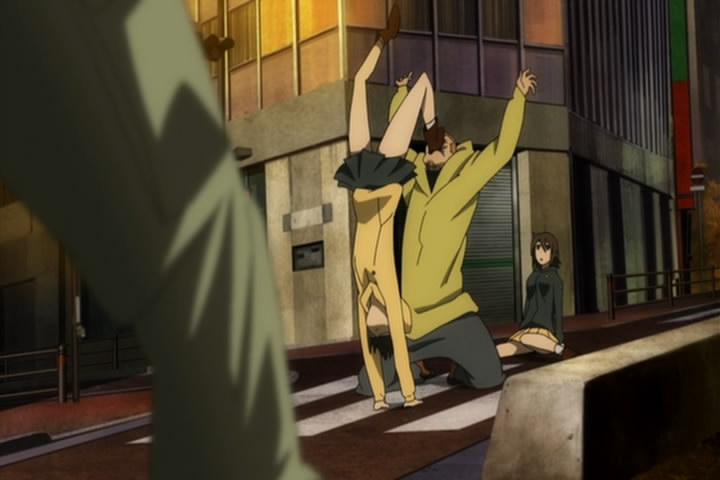 Yeah, they’re definitely Izaya’s siblings alright. The twin-cest relationship creeped me out a bit, but these two definitely fit in right at home with everyone else in Ikebukuro.

All in all a nice episode, and a big reminder of why we need a second season of Durarara!!. Come on Brain’s Base, you know you want to! XD