To Aru Majutsu No Index II 20

We dive deeper into, perhaps the most epic story arc in To Aru Majutsu no Index verse. This week’s episode seemed more of like a small taste or preview of what is definitely going to be the last episode as we see quite a few big clashes and interesting characters go to battle to save the day. Great stuff though, Index II did something that hasn’t happened in quite a while… It kept the viewer on the edge of their seat throughout the episode.

The one thing I gotta talk about in this episode is pacing. The pacing in this episode was PERFECT. There wasn’t any fanservice, which I’m sure made some people sad, but this arc is definitely all about the story, and despite the shuffling around and having two things happen at once, it wasn’t confusing nor did it feel rushed. There was even the comedy relief as far as Kuroko and Misaka goes, and unlike most scenes of the type, it really did give you a breather from all the intense action and awesome that was happening.

This episode really upped the stakes for everyone. First and foremost, we had Touma dodging bullets and trying to save Last Order from the Hound Dog unit that he ran into. It was then I realized, as powerful as Touma is against Magical people and espers, he’s powerless against real weapons and physical attacks. You want to kill Touma? Just shoot him XD

It was that sense of dread, that really made the first part of the episode so exciting. Touma was in real danger, and his right hand wasn’t going to help him here. Not only that, he had Last Order to take care of. The whole part was pretty thrilling. And just when you thought Touma was safe, he ran into none other than Vento. That, was when things got really interesting! 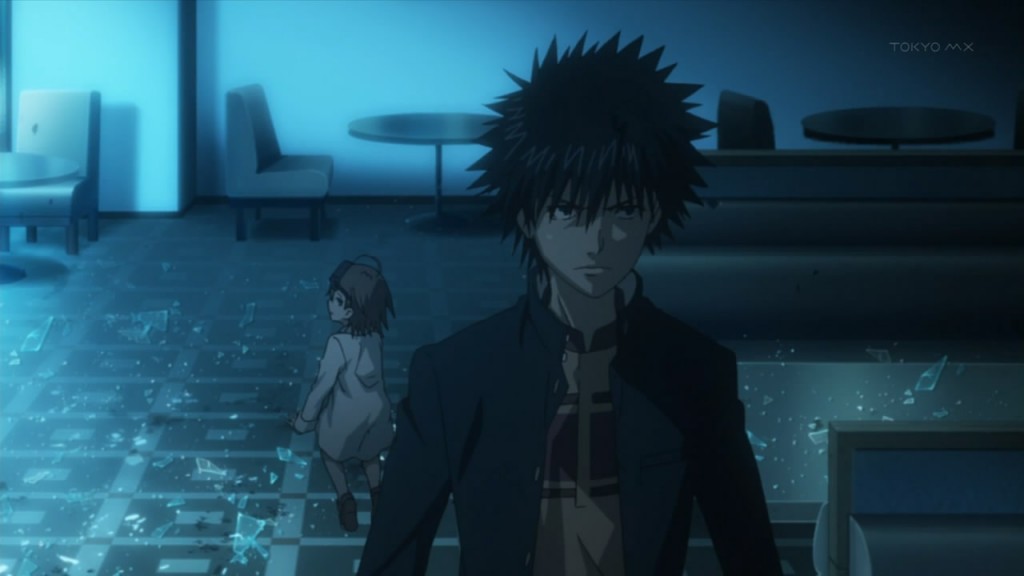 I gotta say, Touma looked badass as he let Last Order escape, glaring at Vento as he prepared to take her on!

Vento is definitely a sadist, maybe on par with Kirihara. I laughed at how she wanted Touma to be a masochist. I don’t know if this dialogue is original or not, but it really made me think of how Kirihara said when he took down Accelerator last episode. Either way, despite how creepy and powerful she seemed, Vento actually was pretty easily handled by Touma.

That was a bit of a disappointment, because Touma really didn’t seem like he was in any immediate danger. In fact, he easily countered her attacks with his Imagine Breaker. I had expected her to actually be a physical fighter, because that would be Touma ultimate enemy. Someone who doesn’t use magic, but rather fights physically is the real nemesis for our Imagine Breaker. Instead, Vento pretty much coughed blood midway through the battle and escaped. Sad, but I guess this arc will definitely have her do something to make her a bit of a threat to Touma.

Touma aside, we saw Accelerator regress back into the real demon he used to be. Accelerator was so brutal, cruel and sadistic, that it kinda made you wonder how the guy was actually doing what he did, for a good reason. He may be on the side of good, But Accelerator is definitely a sick and twisted individual, and one that will kill, and enjoy doing it. As I’ve said before, this Anti-Hero is original, and what’s even more interesting is seeing how much of a hero he is NOT.

The way Accelerator took down that unit Hound Dog, was creepy as hell. Add the black and red backdrop of the area, and it seemed like we were in some kind of slasher movie! O_o

Its pretty obvious that Touma is going to take on Vento, that Kirhara and Accelerator are going to go at it, and that Misaka will be providing cover fire for the two, taking on Hound Dog. I’m interested to see how we get there, and how epic the final confrontation is going to be. With only 4 episodes left, things are definitely in high gear!

We find out what happend to Vento, and we see more of Touma and Accelerator as they continue their struggles, all next week!