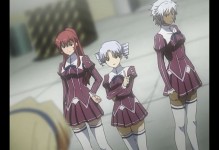 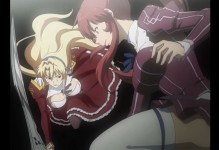 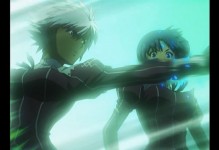 This week, not only do we get a completely awesome and in your face fight scene, but we also get the much anticipated look at Bridgette’s past!  Killer combo?  I think so.  Just as a quick recap of episode 6, Bridgette and Rana were duking it out in the training hall in order to see who would become Kazuya’s Pandora.  It ended pretty much as a tie because just as Rana was about to beat Bridgette into the ground, Atia – one of the seniors – shows up flanked by Arnett and Creo (ranked numbers 4 and 5 respectively for the seniors.)  When Rana asks Atia what she meant by everything “going according to plan”, Atia then explains that although Bridgette is only a sophomore, she challenges seniors (and up to this point, has defeated every one of them) which is setting a bad example for the underclassman.  In an attempt to restore the hierarchical balance of the school, Atia has brought two of the academy’s highest ranking seniors to instruct her.  Here, Rana finds out that Kazuya willingly became Bridgette’s Limiter and wasn’t being used for his abilities like Atia lead her to believe.  Bridgette then tells the seniors to quit stalling and fight her if that’s really why they came.  Kazuya then protests, saying she’s unfit to fight; Bridgette tells him to stand back because it’s none of his concern.

Arnett then knocks Kazuya out – presumably either because she was tired of listening to his whining like I am, or to get him out of the way so they can fight properly – shocking both Bridgette and Rana at how viscous she is.  Arnett then claims that she wants to take on Bridgette, but Creo declines to join her since a two-on-one fight isn’t fair.  Rana then throws herself into the fray, declaring that a two-on-two fight would be fair (Bridgette tries telling her to stay out of it, but Rana ignores her).  Let the fight begin!  Arnett’s Volt weapon is a mid-ranged weapon, much like Bridgette’s, only she wields it a completely different way.  Bridgette is thrown off at first because she initially thinks Arnett is going to strike from one side, but is actually injured from the other side.  After a few blows like this, Bridgette finally figures out that what she thinks she’s blocking is actually an after-image of Arnett created by her Double Accel technique.  Arnett is pleased she was able to catch on so quickly, but increases her speed, effectively disabling Bridgette’s movement.  Meanwhile, Rana and Creo are in the midst of their fight when we find out that Creo is also a close-range fighter like Rana.  Unfortunately for Rana, Creo quickly ends the fight, knocking Rana unconscious with a single punch. 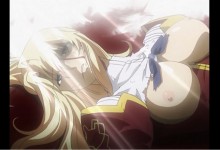 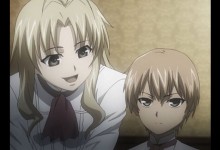 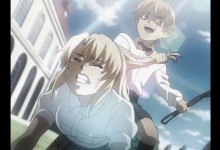 Once Bridgette is down for the count, Atia approaches her and says that they’ll let her go with a warning provided she apologizes and says that she’ll never cross them again.  Even in her unconscious state, Bridgette mutters that she’ll never let them win.  This infuriates Atia and she shouts for Arnett and Creo to remove her stigmata which would at the best destroy her chances of becoming a full-fledged Pandora.  The worst case scenario is that she’d die because of going into shock.  While the seniors bicker about whether or not it’s the right thing to do, we get a flashback to Bridgette’s childhood.  We start off by seeing a 9 year old Bridgette and her mother entering the L. Bridgette home and being greeted by the staff.  I’m not entirely sure why they’ve arrived there, but I’m assuming that Bridgette is the illegitimate child of the master and she and her mother were welcomed into his home due to her mother being terribly ill (with what, we’re not sure).  The two of them are greeted by the lady of the house and her two children, Violet and Louis.  Their mother declares that she will never acknowledge them and that it was only because of her husband’s wishes that she allowed them into her home.  Violet seems to be a bit more welcoming; she approaches the two of them and introduces herself and Louis.  However, while Violet seems to be nice, Louis glares at Bridgette with quite the evil gleam in his eye.

Unfortunately, Louis’ evil gleam isn’t just a gleam in his eye; this spoiled brat is the reincarnation of evil!  No sooner is Bridgette in their home, but he’s torturing her, telling her that she’s a doll for him to do as he pleases with.  Violet spots him whipping Bridgette and treating her as if she were a horse (keep in mind, Louis is a year younger than Bridgette) and scolds him before going to their mother.  Her mother is furious with Violet for siding with “that gold digging whore”, and unfortunately, Bridgette hears every word of the argument.  Later that night, Louis enters her room and prompts to sexually abuse Bridgette.  The next day, Bridgette asks her mother if they can leave because Louis did “strange things” to her (i.e. touching her in inappropriate places) but her mother says they can’t because of her health.  As the years pass, Louis continues to sexually abuse Bridgette until Violet finds out and suggests to Bridgette that she leave the house despite not doing anything wrong.  This is accompanied by Bridgette’s mother passing; her mother told her to be strong and not to lose to anyone right before she passed away.

Back in the present, just as Arnett is about to make a move on Bridgette, she appears to awaken and somehow summons the “wings of light” that Rana was able to unleash in the previous episode.  This allows her to fight on par – if not a become a bit stronger – with Arnett.  However, Arnett realizes that Bridgette is still unconscious and wonders how she’s able to fight so well while not being aware of her actions.  Just as Bridgette seems to put Arnett out of commission, Creo is about to jump into the fray, but Rana stops her.  Rana unleashes her wings of light once again, destroying Creo in a matter of seconds.  However, as Bridgette comes to and Rana approaches her, Arnett and Creo regain their footing and is about to launch another attack on the girls when Chiffon and her assistant appear, telling them to stop.  They ignore her, but Arnett’s blow is blocked by Chiffon’s assistant and Arnett is knocked out by Chiffon.  Atia is shocked by Chiffon’s power, but realizes that she’s ranked number one for a reason.  After successfully breaking up the fight, Chiffon tells Bridgette and Rana to take Kazuya to the hospital wing while she deals with the seniors.  Afterwards, Chiffon approaches the remaining seniors who are plotting against Bridgette to try and convince them to cease their plans.  When her efforts don’t work, she informs them that Bridgette was able to fight on par with Arnett.  This seems to concern the other girl, but she also seems to be all the more determined. 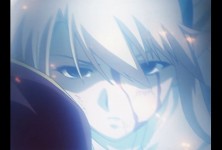 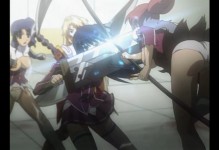 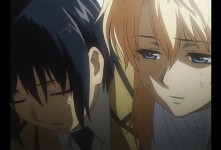 Opinions: Surprisingly, this was an excellent episode!  We got the long awaited peek at Bridgette’s past and now understand why she doesn’t like being touched by anyone.  And who can blame her?  Her step-brother (or whatever the hell you want to call him) was a total jackass and I’m surprised he even knew about that sort of stuff since he was 8 years old when he started molesting her.  This makes me wonder what kind of shit well-to-do families teach their children.  While Bridgette’s past was traumatic, you can tell that she took her mother’s words to heart and seems to want to prove herself to her adoptive family.  Her past aside, the fight scenes were fast paced and really fun to watch.  Although they’re still pulling off the Fight of the Week, it was a really, really good one!  I really hope that they continue on this track and give us well-rounded episodes with good fight scenes.  Not having Kazuya whining through the whole episode really helped too. XD