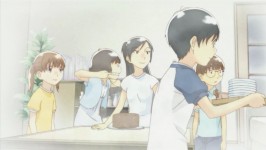 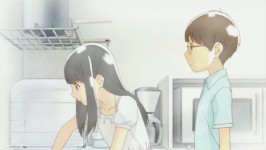 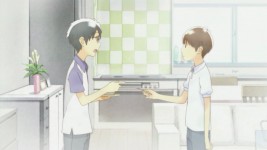 After taking a week off, Wandering Son returns with yet another wonderful episode and gives us another peek into the inner workings of two of the major supporting characters.  It’s summer vacation and first thing we see is Maho entering the kitchen to find her lunch on the table (chilled soba noodles with mandarin slices, I think).  She complains about the mandarins being in the soup since she doesn’t like them, but her mother tells her to just pick them out if she doesn’t like them.  Maho mutters about how the soup will taste like them, but picks them out while Shūichi silently finishes his lunch before excusing himself.  His mom asks him if he’d like to take a hat with him to Saori’s house, but he says that he’d be embarrassed and quickly leaves the room.  As he makes his way to Saori’s house to work on the script for the play, he sees a young woman riding on the back of a bicycle, her boyfriend in the front, and starts thinking about what Saori said about him wanting to become a girl.  It’s starting to seem like he’s really beginning to consider getting an operation when he’s grown up in order to become a real woman.

Shūichi eventually makes it to Saori’s house and finds that the group is already there.  Apparently Momo baked a cake, so as everyone is clamoring over how yummy it looks, Saori goes into the kitchen to get drinks for everyone while her mom hands Takatsuki some plates and forks.  As Saori is getting the drinks ready, she peeks into the living room, only to frown when she notices that Shūichi is having a lot of fun with everyone else there.  Slamming the refrigerator door closed, she turns on the water and starts scrubbing the kitchen sink clean.  Makoto notices this and follows her into the kitchen to see what she’s doing.  He makes the comment that there’s no dishes in the sink that need to be cleaned, Saori’s mom tells him not to worry; whenever Saori is mad or upset about something, she will clean fervently to get rid of her frustrations.  Makoto tries convincing her to rejoin the group, but she ignores him.  It’s only when her childhood friend Fumiya arrives and introduces himself as her boyfriend does she eventually rejoin the group.  She denies that they’re dating and is about to retrieve the drinks when Fumiya sees Shūichi and asks him if he’s the one who cross-dresses.  Shocked, Shūichi isn’t sure whether he should deny it since everyone heard it.  Takatsuki becomes angry and shouts at Fumiya, telling him to mind his own business.

Chizuru then pulls Shūichi into the hallway to ask him if it’s true about the cross-dressing.  Shūichi eventually says that it’s true, but Chizuru then starts pushing him for details about it until Takatsuki storms into the hallway.  She tells Chizuru to leave him alone because she’s obviously troubling him before storming out of the house, Sasa chasing after her.  Saori scolds Fumiya for saying something like that and demands that he apologizes to Shūichi.  Fumiya does so, but Shūichi says that it’s alright.  Thankfully, no one seems to mind the news about Shūichi’s cross-dressing habits.  Later that night, we see Fumiya in his bathroom after taking his bath, trying to figure out what Saori sees in Shūichi.  He thinks that Shūichi’s cross-dressing is disgusting and sick, but then experiments by pulling his hair back and posing as a girl.  He then comments on how he’s a lot cuter than Shūichi.  Afterwards, we see Maho at Anna’s house and she gives her an invitation to her school’s cultural festival.  Maho says that she wanted to give it to someone else, but felt that she’d make too much of a scene, so she’s giving the invitation to Anna instead.  Anna apologizes for not being able to make a scene before teasing Maho about meeting her boyfriend. 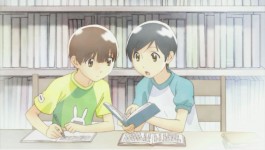 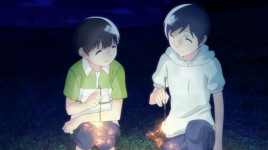 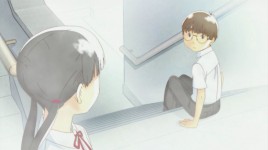 Meanwhile, Makoto staying at Shūichi’s house because Maho is staying at a friend’s house.  He says that he’s thankful that they don’t have to worry about staying out of the way or remaining quiet while she has friends over.  Shūichi agrees with him, but is soon distracted by a text message he received from Saori, telling him that the play is coming along well and she hopes that they’ll be able to continue working together.  Shūichi then starts thinking throughout their meetings that he doesn’t seem to be able to get angry for himself, but so long as he has Takatsuki by his side, he’ll be okay.  He then confesses that she knows him the best out of everyone and he’s thankful for that.  Once the group completes the script, Chizuru announces that she bought fireworks for everyone to celebrate not only the completion of the script, but to celebrate the final day of summer.  While everyone is celebrating, Saori is sulking in a corner, obviously troubled by something.

Once everyone returns to school, preparations for the cultural festival commence.  As Shūichi’s class begins to work on things, they hold a lottery drawing to assign the parts for the play.  Saori is sure that Shūichi will obtain the role of Juliet, but is shocked to find that Makoto got the part instead.  When she goes up to draw her role, she finds that she’s playing the part of Romeo.  Upset that Shūichi didn’t get the part she wanted him to, she storms out of the room, Makoto following her.  Makoto then tells her that he’s actually  happy he got Juliet’s part, although he admits he thought about giving the part to Shūichi.  Saori then says that she’ll kill everyone because the group ruined the play she and Shūichi had worked so hard on and as she runs down the stairs, Makoto chases after her.  Saori says that she hates everyone and that she has no friends, but Makoto tells her that he thinks of himself as a friend and asks if she thinks that Sasa isn’t really her friend.  At this point, they see Sasa and they clam up, returning to their classroom.  However, as everyone is working on the props, Saori tells them to stop rehearsing because she’s changing the script.  Shūichi follows her to the faculty office where their teacher pleads with her to leave the script be.  She agrees, but is still angry about it.

After school, Shūichi and Takatsuki are walking home when they spot a large crowd of people gathering around what appears to be a photo shoot.  They draw closer and Shūichi says that it’s Anna, surprising Takatsuki because she didn’t think that he knew her.  After the photo shoot is completed, Anna spots Shūichi and draws closer, sizing up Takatsuki before asking if they’re dating.  When they say no, she thinks for a moment before pulling out her cell phone to take a picture of them.  Shūichi is surprised to see that Anna has the same cell phone charm.  The next day, we get a glimpse inside Maho’s classroom, where we find out that they decided to do a maid cafe, using Maho as the cover girl for their poster.  Someone compliments her, but as Maho tells them that they’re exaggerating, her boyfriend begins teasing her as well.  Meanwhile, we see Makoto and Shūichi sitting on the roof, talking about the play.  Makoto admits he’s happy to have the part of Juliet, even though he thinks that Shūichi would do a better job than him.  Shūichi says that he’ll be there for Makoto if he needs help, which Makoto says he appreciates.  Afterwards, Makoto and Saori begin rehearsing their lines; at first Makoto is nervous but Saori encourages him through her acting as Romeo.  After their rehearsals are over, the two of them are looking over the courtyard where Shūichi and the rest of their group of friends are working.  Makoto then tells Saori that he’ll do his very best to make the play a success. 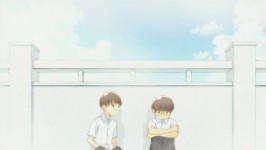 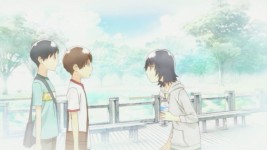 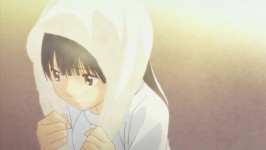 Opinions: To say that I missed this show might be considered cliche, but I really did miss it when it took it’s week-long break.  Although it was definitely worth the wait.  It was a really nicely balanced episode where we still got a bit of a look at Takasuki and Shūichi, but the main focus was on Saori and Makoto, two of the main supporting characters.  The fact that the animators are taking the time to go into depth on everyone, including the main characters, is really admirable and I’m looking forward to see if we get a peek at everyone else’s relationships as well.