After about 3 weeks of not reviewing Index, I’ve decided I’ll gloss over episodes 17 and 18 before tackling episode 19. The reason for not including any summary key points is that, as far as plot goes, these two episodes don’t give you much. As character development episodes and entertainment in general though? These are two really amazing episodes packed with some amazing stuff.

In many ways, I feel like THIS is how Index Season 2 should have started. Looking back, most of the season has been pretty weak, with some occasional hits and a few misses. I guess J.C Staff can’t be faulted for going in the order of the novels, and any bumps in the story is purely the fault of the original novels themselves XD

That said, this arc is finally delivering on the promise that the Index Season II trailer and general hype had been building up. Before we get into the arc though, these two transitional episodes gave us some awesome moments.

The first thing, was the obvious progress in the Touma X Mikoto department. I am even more convinced that these two are the best pairing in the series, even though we know Touma has pretty much an ultimate harem going on. I loved the fact that the whole Misaka & Touma interactions were dedicated an entire episode. Index was more or less in the background, and that made things more enjoyable for me.

As much as I love the magical side of the series, I just can’t help but feel that the real character and strength comes from Academy City, its espers and what not. But I’m running too far ahead, this scene had me squee in shipping fanboy delight: 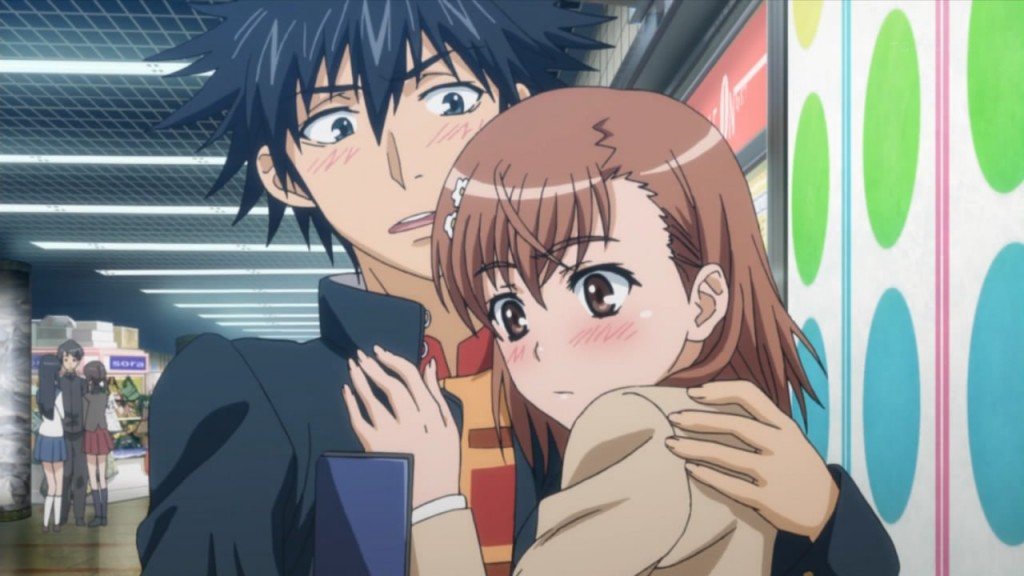 Touma: Its for the Picture! Misaka: Yeah! The Picture!

I screamed foul when Kokoro came in and stopped what was an epic moment and an even more epic memorable picture. As Tsundere as Misaka is for Touma, she’s definitely taking a very aggressive stance and definitely getting closer to him. I think its past the point where Misaka can’t be honest with herself (as the Misaka Imotou analyzed). I think she’s not confident enough to say it to Touma, she’s definitely gunning for him though. Much to Kokoro’s horror XD

All in all, I loved the moments between Touma and Misaka in most of episode 17 and the first half of episode 18. Not to mention the interaction between Touma and the Misaka clones. I especially loved how the Misaka Imotou (I’m calling her that for my ease) teased Misaka Mikoto (Biribiri) about Touma. Then we had MISAKA MISAKA show up to further show that Touma has an epic harem: 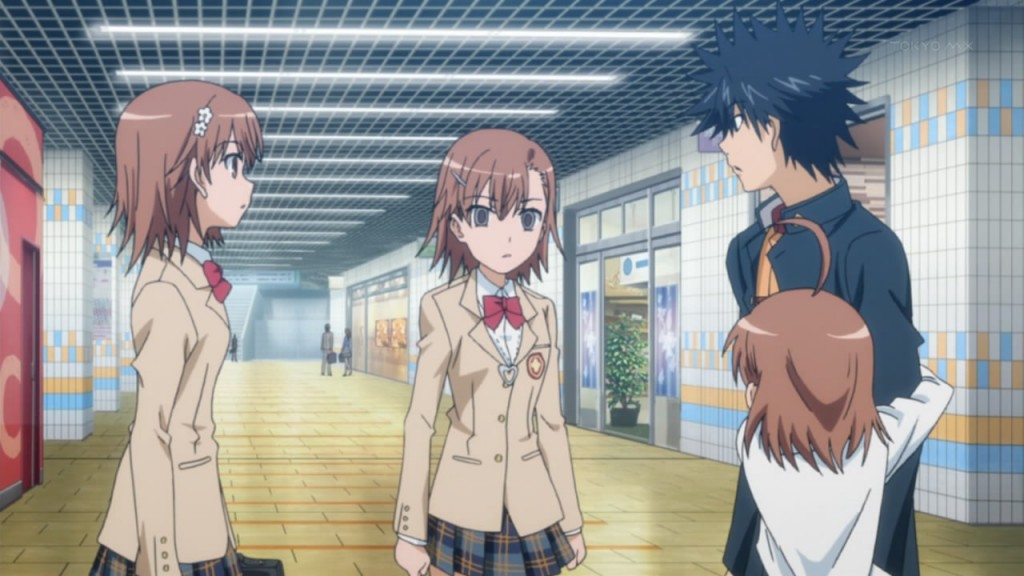 Touma in Misaka Heaven or Hell? Who knows? XD

I’m not sure whether it’s the popularity of Railgun, but J.C Staff was definitely very wise  to focus so much on the development between Misaka and Touma. Now, I think I’ve gushed enough over everything to do with Touma and Mikoto XD

The other big and very awesome part of these episodes, was some much needed exposure to Accelerator and MISAKA MISAKA. Its quite obvious that the next arc is going to be about them, and we’re definitely going full force into something truly epic (or so I hope). With that, there two or three very interesting moments of note.

The first, was of course, seeing what has been going on in Accelerator’s head since he well… got shot in the head. I think Accelerator is definitely one of the most interesting anti-heroes I’ve seen in a while, and that’s saying something. Its generally become the trend, and not just in anime, but in entertainment and stories in general, to favor the anti-hero over the classic goody 2 shoes hero. Maybe its because the classic Hero has been done to death, or maybe its because a person who’s made mistakes, maybe even iredeemable ones and then is aspiring towards a better path is just more easier to relate to. Whatever the case, its undenieable that we see a lot of Anti-heroes these days. That, is why it is pretty darn difficult to find a good one XD

That said, Accelerator is an excellent example of the Anti-Hero. He’s annoyed easily and all that stereotypical jazz, but what makes him interesting is that he’s accepted that he’s a monster, a sick bastard and instead of lamenting on it, he’s moving forward and slowly changing into a better guy. There was always good in this guy, and now he’s pretty much wondering why he didn’t use his powers and superiority for the right things.

He could have helped the Misaka sisters from the get go, but he didn’t. His thirst for power clouded his judgment or what not. Either way, Accelerator remains one of the most interesting character. In many ways, he’s kinda of like Touma, except the other side of the Coin. If Touma is the good, honorable guy who tries his best to create a happy ending and lead a life without regretts, Accelerator has led a life full of regretts, hasn’t been honorable but still has a conscience and wants to be good.

In many ways, this arc was the calm before the shit storm. Something big is definitely coming before Index II wraps up. with about 7 episodes left (assuming this is a 24 episode season as usual) we’re in for the final stretch. If Index keeps delivering like these two episodes, we’re definitely going to get a nice treat for these last few episodes.

I also  realize, this is the longest episode review I’ve done, even if it is for two episodes. Given that these episodes have long since past, I doubt anyone will really read this. I guess this is kind of my own little love letter to Toaru Majutsu no Index, its characters and the awesome moments we got in these two episodes!

And if someone did read all of this, please comment! You’re obviously a very awesome fan of the series, and I definitely want to hear your thoughts on all this!