This was definitely the episode that we’ve been waiting for, the episode that brings to head all the build up and the epic battle between Natsu and Zero. Of course, Fairy Tail being the awesome show that it is, didn’t fill the entire episode with just one action packed battle, there were some awesome character development moments jam packed in there as well.

I think the first and most interesting thing about this episode was Jellal. Last week, I wondered if Jellal had gone evil again, and it seems that it was little more than a ploy by the story to make you think Jellal had remembered everything. Could’ve fooled me with that creepy smile though XD

I think the metamorphosis that Jellal’s character continues to undergo is definitely one of the greatest things about this arc, and Fairy Tail in general. We’ve all seen the bad character see the error of his ways and become one of the good guys, but Jellal is really a different case. If it was the old Jellal, he’d probably be wrecking havoc right now. The memory-loss ridden Jellal though? He’s a beacon of hope for everyone right now.

Not only does he go and help Natsu, believing in him and giving him a much needed power up, but he also encourages and motivates Wendy. Its pretty obvious that without Jellal doing what he did, the battered Fairy Tail wouldn’t have been able to do much at this point. All in all, I’m really glad that Jellal came back the way he did. I definitely hope he becomes a recurring or regular character in this series. The latest dynamic is just too friggin awesome XD

That aside, we had the character moments with every character making it to their Lacrima. Lucy definitely impressed, given that she’s definitely the weakest member of Fairy Tail besides Happy, and yet she dragged herself to the Lacrima, ready to fling herself at the Lacrima if it meant helping her friends. The scene was made all the more powerful by a worried Happy begging her to take it easy.

And just when you wondered what Lucy would indeed  do, we see Gemini pop in to give Lucy a hand. It was really nice seeing Lucy’s love for Celestial Spirits being returned in kind and having Gemini come in and help her. I really would have liked to see Lucy grab all the spirits from that Oracion Seis woman, but I guess this isn’t Pokemon XD, She can’t catch em all XD

Gray and Erza were pretty much fine, and easily hit their places, so it wasn’t as much of a spectacle as a “Well, I guess they have nothing better to do than wait”. We also had Mr. “MEN!”… I mean Ichiya buff himself up with some rippling muscle perfume, but honestly, at this point this character is hardly worth interest to be honest XD

Finally, the most epic part about this episode was the exceedingly well animated fight between Zero and Natsu. I think this was hands down the best animated fight in Fairy Tail yet. The fluidity of Natsu’s motions, especially as he dodged Zero’s attacks and then charged in with his own, were very smooth.  It was great to see Natsu power up again into his final Dragon Slayer form.

I don’t doubt the time when Natsu will be able to just go into that form at will, but for now, I think it still makes sense that he needs some sort of help or powerup to get himself going. As quite a few people have pointed out, Its not that Natsu is overpowered, its that he has help that usually helps him get the power he needs to take down the baddy.

The episode ended on an impressive note, namely: 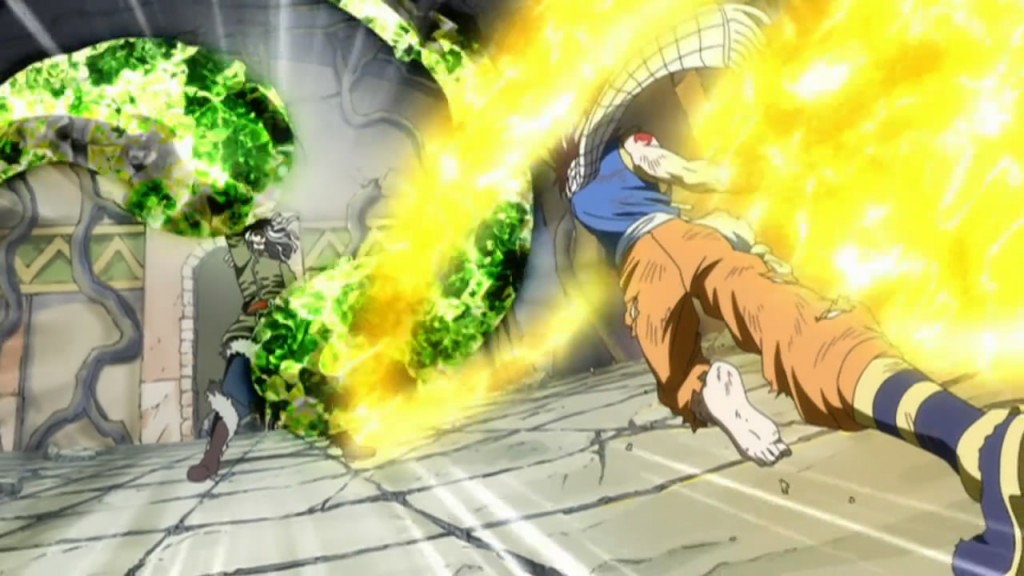 With Natsu releasing a new powerful attack, and Zero unleashing his own ultimate attack, this are definitely coming to the climax of the fight. It does kind of suck that we have to wait a week for it, but I’m guessing this arc will wrap up by next episode XD

Natsu seems to be using some new power to take on Zero, and it seems things for this arc resolve, all next week!