We dive into this week with a bit of side perspective, before we dive into the meat of the interesting events and one majorly epic battle. While it can definitely be said that Fairy Tail did beat around the bush a bit, and presented only the very beginning of the awesome that seemed to have been promised last week, it didn’t feel like an unnecessary either.

Wendy meeting Jellal was pretty… meh at best. It didn’t really cover any ground, other than show the fact that Wendy really was more interested in seeing Jellal again rather than stop Nirvana. Carla on the otherhand, was totally interested in saving Catshelter and having others do it for her. I can’t say I’m too much of a fan Carla as a character. Unlike Happy, who constantly fights and struggles for what he wants or needs, Carla just acts like the annoying damsel urging everyone to save her.

Speaking of Happy, the part where he, Natsu, Lucy and Gray got up was pretty… Darn… EPIC! As they struggled to get up, I definitely felt an adrenaline rush and a surge of excitement. I think its one thing to see heroes get beaten down by villains, but its even more awesome when they get back up on their feet, battered and bruised, only to go at it again. This was definitely the case in this scene: 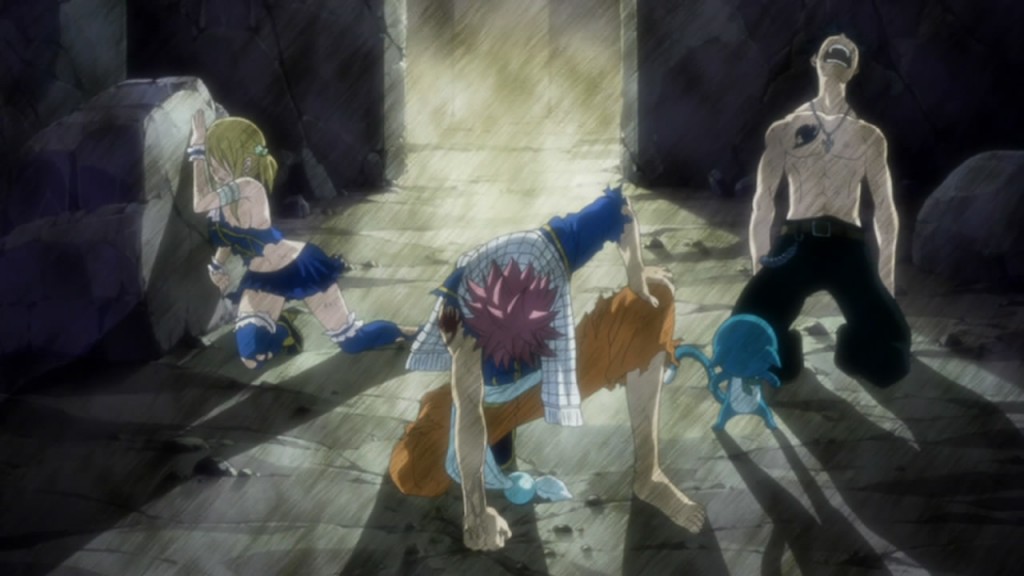 The battered Heroes get back up!

Speaking of cool, I definitely gotta hand it to Blue Pegasus and Lamia Scale. They definitely did something rather awesome, given their states and how beaten they were. I definitely think that Hibiki is the coolest member of Blue Pegasus, and he pretty much stopped Nirvana (even if temporarily) and got the team back together and ready to fight. The only guy that I really think was useless was Ichiya. God that “MEN!” stuff is really getting on my nerves XD

Beyond that, the big thing this episode was Jellal getting his memories back. I gotta say, as much as I liked good Jellal, there was something really badass about  evil Jellal being back and  totally in control. I think that while I like good Jellal, he definitely seems a lot more weak than his evil version. The evil Jellal is the very personification of dominance. Now what I’m curious about is what Jellal’s intentions are now that he’s gotten his memories back. Is he back to his evil ways or resurrecting Zeref? Or is he going to actually be the anti-hero character like Laxus?

Whatever the case, the fight between Natsu and Zero has started. I suspect that Jellal is definitely aiding Natsu this time, if only because he hit Natsu with a fire magic spell. We all know that Natsu can eat fire and replenish his energy. I’d say Natsu was doing rather well even before Jellal came in, stopping the peircing magic spell that Zero aimed at him with a fire fist of his own.

I did feel like that this episode’s content could have been wrapped in half an episode and the other half could have gotten deeper into the whole Jellal/Natsu thing and then get the fight between Natsu and Zero to a decent level. I guess we’ll have to wait next episode for it though… =/

Natsu goes all Dragon Slayer on Zero, the fight gets even more intense. What is Jellal’s role in all this? All of this and probably more, next week!