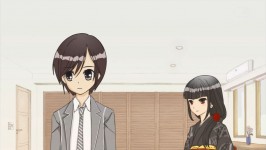 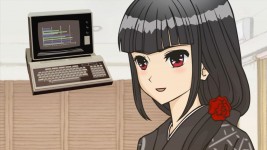 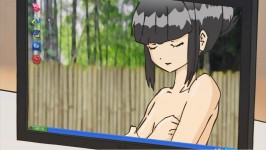 I take back what I said last week.  This show makes absolutely no sense.  This week we start off seeing Mahiro and Atoko and Atoko asks if he has any experience with “MyComs”.  Mahiro realizes she’s talking about personal computers and asks her what she’s having trouble with.  She tells him that she saw a website the other day and wants to re-visit it, but isn’t sure how to do that. Figuring it’ll be an easy task, Mahiro agrees to help her.  And then he boots up her computer to find a wallpaper with some naked woman on it who mysteriously resembles Atoko.  Trying to ignore the background, he sets about trying to figure out which icon is for her internet.  As he moves the mouse over each icon, they shout out what they’re for…all except for one.  The very top icon moans rather loudly and Mahiro becomes flustered, deciding that Atoko is testing him.

He finds the browser and opens up her webpage history only to find that she’s browsing 100 sites a minute.  That’s more than one site a second!  He also notices that a lot of the webpages she’s visited have to do with either porn, women or both and reiterates to himself that she’s just testing him.  He then asks her what the website was about and she said it had to do with dogs, so he sets about trying to figure out which website it was.  Two hours later, he finally finds it and it’s a just a picture of a dog.  Atoko squeals in delight, saying how cute the dog is before thanking him and going about her business. 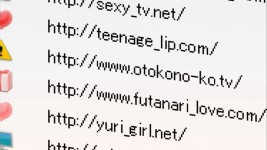 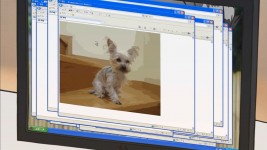 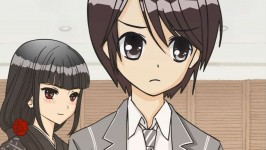