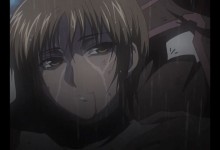 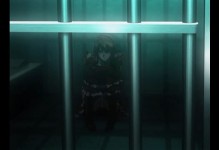 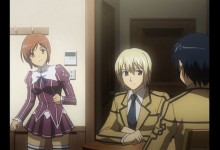 At this point, I’m not entirely sure what I think about this show.  Sure, the detail in the animation is stunning and the fight scenes are pretty rad and the fanservice is fairly decent.  But dare I say it?  I think this show might have too much fanservice.  Anywho, we start off this week with a flashback of sorts to where Ingrid (the sexy redhead from last week) is holding her dying friend in her arms.  Her friend, who’s name is Marine, asks her if the first years are safe and Ingrid says they are.  Marine then smiles and just as she passes away, we see the remains of what appear to be a Nova.  Fast forward to present time, and we see Ingrid in the shower reliving the events of that day.  Meanwhile, Bridgette is in a cell of sorts (maybe solitary confinement?) and we see her teacher approach her.  She informs Bridgette that it’s been a week and she’s free to go.  Bridgette leaves without a word, but as she’s heading back to her dorm room, she crosses paths with Ingrid.  Ingrid says something and what’s the first thing Bridgette does?  Yep, that’s right.  Pulls out her Volt weapon.  Ingrid then introduces herself as the Guardian of Order and tells Bridgette to put her weapon away, stating that she wishes to fight her as an equal Pandora, including Limiters.  She gives Bridgette 24 hours to obtain a Limiter – if she can find someone willing to be one – and walks away.  While all of this is going on, we see Kaho spying on the two.

Kaho rushes up to Kazuya’s dorm room and delivers the news before telling him that he needs to stay the hell away from Bridgette so that he doesn’t get hurt.  However, instead of actually listening to what seems to be pretty damn good advice, Kazuya rushes out of the door and to Bridgette’s dorm room.  When he arrives, he knocks on her door before letting himself into her room (who does that?!) and she’s nowhere to be found.  Unknown to him, Bridgette is in the shower, so instead of just leaving like he should, he starts poking around her room and spies her diary sitting on her bed.  Just as he goes to look at it, Bridgette emerges from the shower and lunges at him, screaming for him not to look at her diary.  Of course, this means she loses her grip on her towel and it falls, revealing literally every part of her body to Kazuya.  She screams and wraps herself in her bed sheets (admittedly, she does look rather cute when doing this) and Kazuya repeatedly apologizes to her for intruding.  He then tells her that he wants to be her Limiter and that he heard that she’s fighting an upperclassman the next day.  She tells him to go away and that she doesn’t need a Limiter to do her job.  Kazuya actually listens for once and heads back to his dorm room, leaving Bridgette to her thoughts. 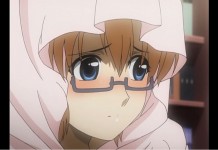 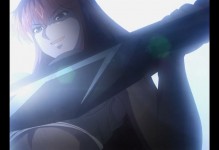 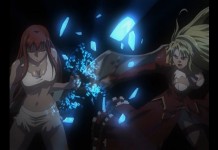 However, leaving Bridgette to her thoughts seems like a very bad idea.  Instead of finding a Limiter, she ambushes Ingrid in her dorm room, stating that if she wants a fair fight without using a Limiter, she’ll just have to fight Ingrid when she has no access to her Limiter.  Ingrid is amused and easily overpowers Bridgette at first.  As always, a massive crowd gathers to watch (this time by hanging out of the dormitory windows) and Bridgette just doesn’t know when to give up.  Kazuya hears some loud explosions and what-not going on outside and goes to investigate, only to find Bridgette using her Accel, which basically increases her speed and power.  Ingrid comments on how she can use high-end techniques, but it appears that she’s an “Only Accel” Pandora and that using Accel is one of the more basic attacks.  She then uses her Tempest Turn (basically, she moves so quickly it looks like she’s made clones of herself) and overpowers Bridgette once again.  At this point, Ingrid’s Limter, Leo, shows up and Ingrid pauses in her attacks to ask any of the first years watching if they’d be willing to become Bridgette’s Limiter.  She laughs when no one volunteers, saying that Bridgette doesn’t appear to be very popular, but then Kazuya shows up saying he’ll be her Limiter.  Ingrid tells Bridgette that she’ll wait long enough for them to perform the Baptism, but Bridgette denies the need for a Limiter, saying that using the Ereinbar Set technique makes her feel like she has hands roving all over her body and it makes her feel dirty.

Ingrid and Leo are surprised by this, saying that it’s a little strange since you apparently share all five senses, but it feels more like being in love than anything else.  Bridgette again denies her need of a Limiter and Leo initiates the Freezing technique, only to have it shattered by Kazuya’s Freezing.  Ingrid is surprised by this (like everyone seems to be) since he’s not an official Limiter, but the battle rages on.  Ingrid eventually initializes her Pandora Mode so that she’ll be able to move within Kazuya’s Freezing, saying that her friend Marine died in vain while all of the first years ran off because they were too scared to fight.  At this point, Bridgette knocks out Leo and Ingrid becomes incapacitated.  She mutters something about Kazuya’s Freezing being similar to a Nova’s attack than a Limiter’s.  At this point, Ganessa appears and explains to Ingrid that during the incident (apparently a Type-S Nova appeared during a mock Carnival for first years) a lot of the students wanted to fight, but Marine told them to run and held off the Nova until reinforcements could arrive.  Marine is shocked to realize that the smile on Marine’s face as she passed away was that of a Pandora who did her job in protecting others.  Kazuya then throws his two cents in about how Pandora are meant to protect others, blah blah blah.  Same sob story from two episodes ago.  And then the fight just kinda ends and everyone goes back to their routine. 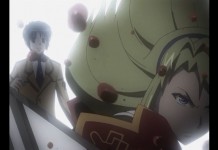 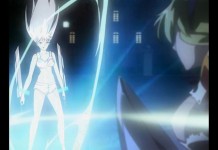 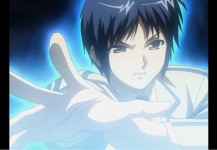 Opinions: While I still enjoy the fight scenes to an extent, I’m kind of over the whole Fight of the Week aspect.  Bridgette seems to get absolutely no reprieve from any of the other girls!  We get that you’re jealous, but c’mon!  Get over it.  And Kazuya.  Boy, if someone says “stay away from her”, stay the hell away from her!  It’s not that hard!  But no.  He goes out, gets involved in all of these fights (I’m surprised he hasn’t been kicked out yet) and constantly throws himself at Bridgette, only to get rejected.  Now, I never thought I’d say this, but can I get more plot please?  I’m still confused about the Nova’s, confused about why Kazuya’s skeletal structure is 30% stigma and I want to know more about Bridgette’s past.  Is that really too much to ask for?