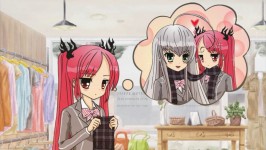 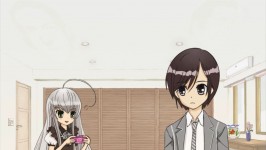 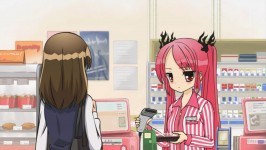 I’m still in shock, but this episode actually made sense!  And it wasn’t a horrible episode either!  Thank God for small favors.  Anywho, this week we see Cthuko looking at scarves and imagining herself and Nyaruko sharing the scarf.  (Me thinks that Cthuko has a crush on someone~)  We then see Nyaruko playing what looks like a PSP and Mahiro shows up, asking where Cthuko is.  She said that Cthuko decided to get a job to earn money.  Mahiro comments that Nyaruko should be working as well, but she retorts by saying that she’s already given up on getting a job.  Bravo Nyaruko.  I am astounded by your dedication.

The rest of the episode follows Cthuko on her various job experiences.  The first one has her working at a convenience store.  A customer buys a bento and she asks if they would like it heated.  When they say “yes please” instead of placing the bento in the microwave like normal people, what does she do?  Heats up her body to heat up the food, which results in a massive explosion.  Her next job is at a fast food place and we see a 45 second period of this woman constantly changing her order and Cthuko getting more and more confused by the second (which I would too if I was dealing with that customer!)  Suddenly, her body glows bright red like it did when she was heating up the food at her previous job and another explosion occurs.  We then see her pumping gas at a gas station until Mahiro shows up and says that she really shouldn’t be working there (and I agree wholeheartedly.)

The episode ends with Cthuko knitting a scarf instead of purchasing one.  Nyaruko shows up and asks her why she isn’t working anymore.  Cthuko says that she gave up. 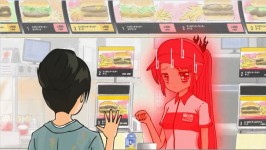 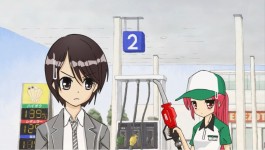 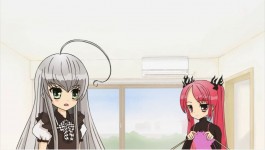 Opinions: This is, by far, one of the more coherent episodes in the series.  I didn’t have trouble following what happened, my mind is not boggled and nor am I sitting here staring at my computer monitor slack-jawed for 20 minutes before I can form a coherent sentence.  Overall, it was a decent episode although I’m still no closer to figuring out why the human race is bound for extinction.  There’s also apparently only 32 days left until that happens.