Another solid episode from Fairy Tail, we get into the aftermath of the battle between Cobra and Natsu this week, and also get to see the 10th Magic Saint show off his powers. There were a nice twist as well, but I think for the most part, this episode didn’t have anything too shocking, although its probably leading up to something big, that much is certain.

First of all, we saw the big fight between Brain and Jura. Jura totally owned the guy, makes me wonder why Jura has been so useless uptill now, focusing on Richard and running around. If they had that sort of firepower, it seems stupid that the alliance has been sitting twiddling its thumbs. Still, I gotta admit the fight was rather cool, and seeing Brain getting totally overpowered was beyond epic.

The next big thing, and probably one that’s going to impact thhe series in a big way, was Wendy casting a spell on Natsu and ridding him of his motion sickness. Now, I’ll comment on how frigging overpowered this makes Wendy as a healer. She can cure any disorder, any physical problem as long as there’s a spell for it? And there probably is XD. Stupid as it is that Natsu’s motion sickness was cured by a spell, I think it was pretty important that it did happen. The whole “Motion sickness” thing was actually getting a lot on my nerves, and its not really a weakness, more of a comedic aspect that had just dragged on for too long. 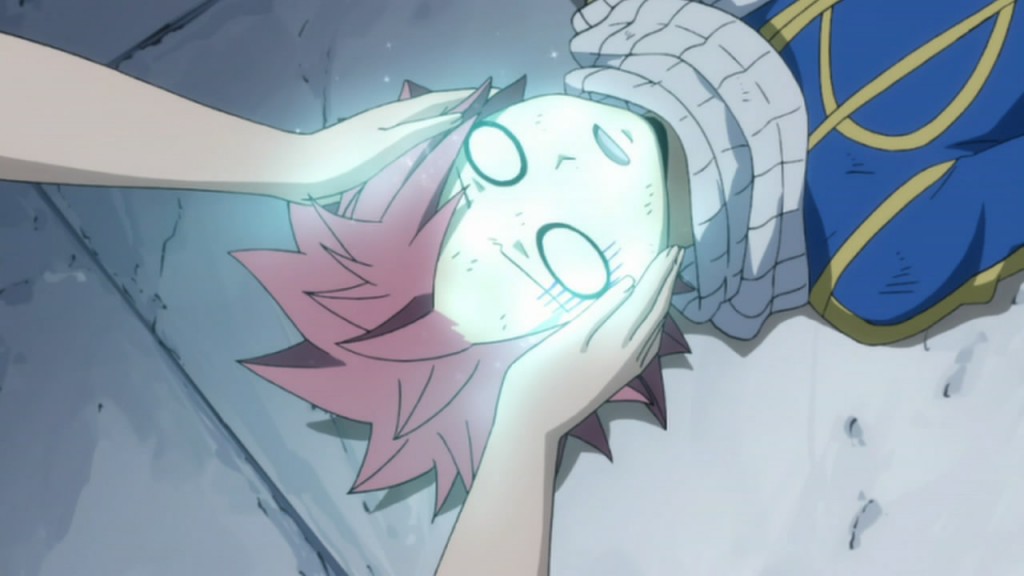 Motion Sick? Get your dose of glowey Sky Magic Today!

This does put in the idea that Natsu is really getting friggin overpowered now. He has literally no weakness, and unlimited power. Something that’s well, not fun in a battle manga/story. The hero needs to have weakness and obstacles that he needs to work hard to power through, so you end up rooting for him. He even needs to fail every now and then, and Natsu has pretty much never lost a fight he’s needed to win, nor does he have any major weaknesses now. I do hope there’s some sort of balancing aspect that happens soon, just to keep things interesting.

Speaking of soon, I was rather surprised to see that Midnight had just been playing dead, in the fact that Magic doesn’t hurt him at all. Now, this may seem like a very overpowered Mage right there, but I think he’s actually not all that powerful. Even if magic directly can’t hit, physical attacks can. Erza’s swords, or even Natsu’s punches. It doesn’t seem like Natsu is going to take on Midnight though, so I think the upcoming fight with Midnight should be interesting.

I think its also worth noting that we have this whole “6 Prayers” thing, and Brain hinting towards a certain someone coming after all Six Prayer, and by some extension all 6 Pillars of Oracion Seis are taken down. I’m guessing that someone is that white haired guy in the green clothes, the guy Natsu is shown fighting in the OP. I haven’t an idea what his big role is or who he is, but I’m definitely interested in seeing what he’s all about in the coming episodes. (Manga readers, no Spoilers please! XD)

The other big mystery, is why Brain is so fixated on going after Caitshelter. This is something that definitely sparked Charles/Carla’s interest, as well as  Jura’s. All the thinkers think there’s some big reason for the target being Caitshelter, and I’m inclined to think along similar lines. Caitshelter, Brain, Midnight, Nirvana…. Man, there’s quite a few things that have got the viewers wondering. Makes me anxious to see what happens next!

Next episode, Jellal and Erza take on Midnight! Next week can’t get here soon enough!