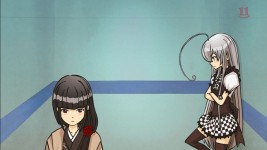 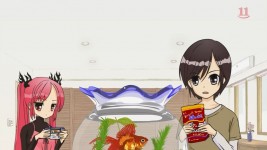 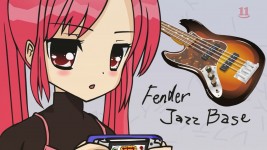 After waiting 3 weeks for the subs to come out for this episode I’m left completely baffled and terribly confused.  This episode we open up with Nyaruko and Atoko in an elevator together.  After several moments of silence, Atoko tells Nyaruko “If you open up your heart more, you wouldn’t have to strip all the time.”  I just…what?

While I’m still thoroughly confused by what just happened, we meet up with Cthuko and Mahiro.  Cthuko is playing some sort of hand-held game console that looks suspiciously like a GameBoy Advance.  Mahiro asks her what it is because “it looks old” and Cthuko then starts rambling about something about swans and their legs paddling furiously under the water.  Mahiro looks just as confused as I’m starting to feel and tries asking Cthuko what she fed the goldfish.  Instead of answering him, she starts talking about the game console and how it can also store her blood type (and here we get a random ass picture of a Fender Bass floating in the background.)  Mahiro starts shouting at her, demanding to know what she fed him.  She answers with “food” and he presses to know where she got the food.  She then reveals it’s from space and Mahiro freaks out because apparently his goldfish has now grown a pair of very hairy human legs.  Mahiro continues freaking out and Cthuko pauses her game to look at the fish and says “Oh. It grew legs.” or something to that effect.  At this point, I think Mahiro’s expression says it all. 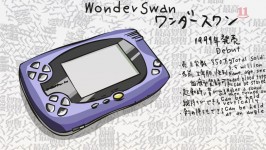 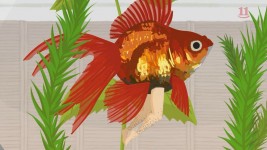 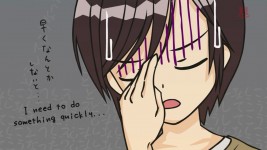 Opinions: I… We- Okay, I have no idea wtf just happened with this show.  Seriously?  A 3 week delay and this is all I get?  I’m not even sure what the hell happened in this episode!  Why did the fish grow legs?  Why is Nyaruko stripping?  Does she even have a reason to need to be a stripper?  And more importantly, is she getting paid for said stripping?  And for the love of all that is holy, why did the damn fish grow legs?! My head hurts…