Alright!!! We have the first episode of one of the recently popular shounen Manga turned Anime, Beelzebub! This is another adaption done by Studio Perriot, who people are most familiar with for doing Bleach and Naruto, two mega popular Shounen Giants.

So cutting right to the chase, is Beelzebub good? Yes. The story from the manga has been almost faithfully adapted, except for a few tweaks here and there. The story and pacing for the first episode is definitely good and it ends at a decent point in the manga, I’m not sure if its exactly the first chapter (which is longer than your average manga chapter of 15-20 pages) or if it goes to about 1.5 manga chapters, but either way, they start it off really nicely.

I think the real highlight off the show, is definitely in the seiyuu casting. The voice acting for this show is exemplary, and I really did feel like each voice totally fit each character. Added to that, the performances definitely have a good amount of life and depth to them. Props to Katsuyuki Konishi as he does a great job bringing Oga to life as the ruffian, evil but extremely confident guy he is. Hilde and Furichi get the similar red carpet treatment, and even Baby Beel’s cute baby-ness is done exceedingly well! 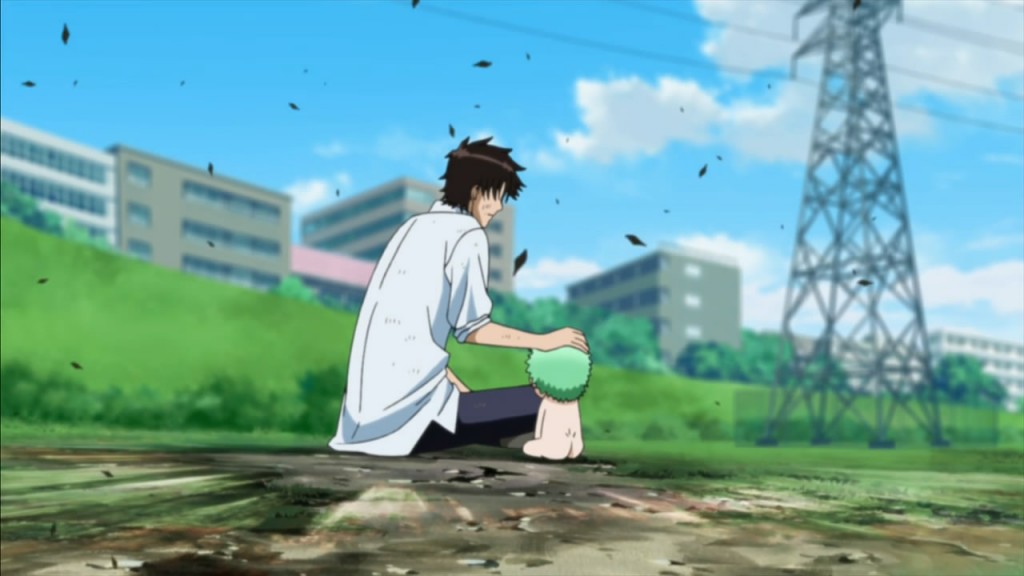 He does more than just that though, he even goes and attempts to save the little kid when the steal tower breaks! I think its obvious that Oga, no matter how much of a bastard and bully he is, he really is a nice person underneath all that devilish exterior. I guess there’s very few people who would actually let a baby die. Even if he is the son of a Demon Lord! XD

For all the praise I’ve given this show, there is one irking point to the first episode that makes me worry. Now, anyone who’s read the original manga will notice that the art for this series wasn’t all that impressive in the earlier chapters. Now, while it wasn’t all that good, it still doesn’t mean the animation team gets a free pass to make choppy animation. The Whole part with the “synchronizing powers” thing that Oga did with baby Beel, and then the whole “stroke” on characters during expressions thing. The stroke really looks very tacky, which makes me question the art director’s choice to use that.

All in all, the animation isn’t HORRIBLE, but its not great either. Its expected from a shounen show though I guess, and hopefully the animation quality will improve as the series gains popularity and more of a budget hopefully.

The music for the show is pretty decent. I’m not particularly IN LOVE with the OP, but its decent, and the animation is funny and quirky. I dig the ED a bit more, and its a pretty good one.

All in all, Beelzebub is a funny shounen manga, one that really doesn’t have anything similar to it. Its off to a good start, and I can’t wait to see how this show proceeds! Here’s to blogging this every week!