“Typical half-demon with awesome powers kills other demons and unearths some terrible scheme behind the woodwork” is probably the first thing that comes to mind when reading the summary for the show Otomoe Youkai Zakuro. (Think InuYasha.)  In the case of Zakuro, you’d be partially correct. This quickly became one of the favorite shows of the season and not just because it was pretty to look at. The storyline slapped us silly with all the drama-filled twists it took but still left us wanting more. The characters, while seemingly ordinary shojou characters at first, quickly revealed there was more than meets the eye. And don’t even us started on the drama. 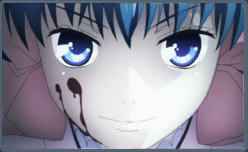 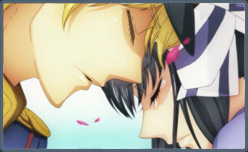 First off, the animation. It’s shiny. It’s pretty to look at. And it’s pretty damn obvious that the animation company shelled out some serious bucks to make it look and feel like an anime should, but without outshining the story. While most of the episodes will look like your typical anime, the fight scenes are where it’s at. Everything is illuminated with this eerie glow, but it also draws you in because you just can’t look away. Every setting was beautifully drawn and they didn’t skimp on any details like some companies are known to do *coughPierrotStudioscough* Do we really need to say more? It’s pretty and that’s all that matters.

In terms of art direction, the animation team really brought the story to life with it’s backgrounds and color choices.  It’s most definitely a shojou series and the backgrounds account for that with their light, pastel color palettes.  Even the character’s clothing colors were obviously selected with care, in order to bring about that feeling of “Why yes, you are in feudal Japan!”  And by God, it worked!  In terms of visual effects, everything from the way they walked to their fighting styles were fluid and just all around pretty to look at.  Nothing was super flashy, but in a sense, just looking at the way the characters moved made it flashy (if that makes any sense.)

The soundtrack is also excellent, ranging from intense battle themes to an eerie, yet beautiful chant that Bonbori and Hozuki sing while Zakuro is in battle complete the overall feel of the series. The OST is also amazing, bringing in all of the different ending themes, which are sung by the different groupings of characters (so Amegaki/Zakuro, Susukihotaru/Riken, Ganryuu/Bonbori & Hozuki.) Some songs are happy and some are just plain sad, but it’s a wonderful OST none the less.  The voice actors themselves were an amazing addition to the show and whoever cast them deserves a medal.  Zakuro’s voice actor was able to capture the determination of the character, but also show her softer side when confronting her past and her potential future with the male lead.  Every single person on the cast brought the characters to life even more-so than the animation and that’s definitely saying something.  We even started rooting for the bad guys in the end because their actors were able to get their emotions across so well. 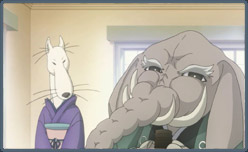 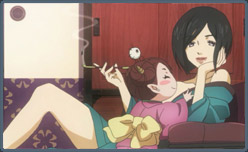 After you’re drawn into the shiny land of Zakuro, you’re drawn even further in by the amazing characterization. Each person has their own quirk; Zakuro tends to be a Type A Tsundere who finds herself falling rather quickly for a human despite hating them while Susukihotaru doesn’t want to be touched by her partner Riken (you find out why later on in the series) and Bonbori and Hozuki share a haunted past that they don’t feel comfortable sharing with anyone. Even their bosses, Kushimatsu and Lord Amaryoju, have a mysterious feeling about them that makes you want to learn more about them. The humans, especially Amegaki seem like your typical military men, but then you delve deeper into their insecurities, dreams and desires and find out that yes, they are real people. The studio really took the time to consider each little detail about the characters so that they ceased to be two-dimensional and became someone that you really rooted for and cared about.

Which brings us to the plot. It may seem simple, but in reality, it’s not. Zakuro, Susukihotaru, Bonbori and Hozuki are half-spirits who reside in the Ministry of Spirit Affairs alongside Kushimatsu, Lord Amaryoju and several other spirits during the era where much of Japan is becoming “Westernized.” Three military men join them – Amegaki, Riken and Ganryuu – and are partnered up with the girls despite Zakuro’s complaints. Through several missions, they partners grow closer to each other, revealing intricate parts of their pasts and their powers. Then comes in Hanadate, who, despite his calm and calculating demeanor, is really the ultimate bad guy! Several encounters with demons later – most notably was the Black Widow named Rangui and her half-spirit helpers Byakuroku and DaiDai – Zakuro learns the truth about her powers and why her mother disappeared. There’s tons of drama, plot-twists that no one ever sees coming and there’s blossoming romance between the partnerships that really make me feel warm and fuzzy on the inside.

The ending, while disappointing in some aspects (mainly pertaining to Zakuro’s “ultimate power-up”) wrapped up things nicely.  Nothing was left making us wonder what the hell just happened like there has been in so many other animes, like Evangelion for example.  Everything was sorted and bundled together nicely, leaving no loose ends in the plot-line or in terms of the relationships of the characters.  As far as we know, everything continued on in a similar fashion to how the series began and that’s something we’re completely okay with. 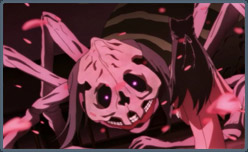 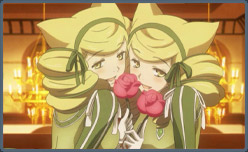 Overall, This is by far one of our favorite series to date, both in terms of plot and animation. The whole thing is just gorgeous and the fact that they were able to balance such a depressing story with humor, romance and action proves that the studio in charge really knew what they were doing. If you enjoy girls kicking ass, yet still being able to fall in love, this is for you. Love drama? Again, this is for you. Hell, if you just like to look at shiny things, this anime is for you! Just watch it and admire the shiny. We award it with a shiny A Grade!