Panty and Stocking with Garterbelt Review

Oh Christ I dont even know WHERE I should start with this amazingly mad cap series. While popular opinion on this show is 50-50 in the fandom, I fall on the 50% who are madly in love with it. I wasn’t even aware of this show…UNTIL I was shown its trailer. First thoughts “Oh this looks amazing! Its like PPG meets Japan or something! So nostalgic…reminds me of the good ole days of Cartoon Network.” Course that thought was sent spinning outta my head when I pressed play and the orgasmic/moaning music started XD Only thought in my head “Jim, this DEFINITELY isn’t a kid’s anime like I thought it would be.” 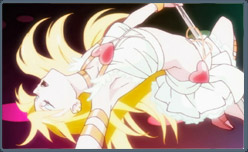 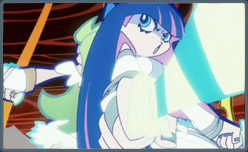 What do you get when you stick an afro priest with a major criminal past with two fallen angels (one of whom is a complete bad mouthed slut and the other a sugar craving, bdsm nut) and a dog (???) who bears a striking resemblance to a certain lovable character from Invader Zim? You get epic in a can thats what you get! Gainax you crazy bastards, You’ve done it again! I NEVER thought that I’d be so madly in love with a show where the two heroine’s fight crime using their panties and stockings! And to think that this show came into being during a company party where everyone stinking drunk. VIVA LE ALCOHOL~ XD

The story is pretty simple. There’s Daten City, which is stuck somewhere between Heaven and Hell. Like any city in such a show, its gotta have a problem. In this case, there are Ghost’s who terrorize the citizens. Oh who will save the innocents from these evil ghosts? Why, two butt kicking (fallen) angels called Panty and Stocking Anarchy thats who! These sisters were kicked out of heaven (for reasons unknown buuuuuut you can guess em XD) and now they have to defeat Ghost’s in Daten City and collect enough Heaven Coin’s so that they can get back to heaven. And to guide them, they have a big, black priest (called GARTERBELT for crying out XD) looking after them who has one major afro. And their pet dog Chuck who is pretty much Panty and Stocking’s butt monkey. Every episode is broken into two parts (with some exceptions) and though it starts off as a series where you think “oh every episode is gonna be some random madness” but then ladies and gents….the villians come in. AND THEN WE ACTUALLY HAVE A PLOT LE GASP! 8D 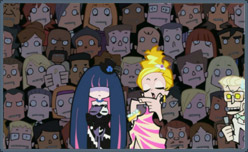 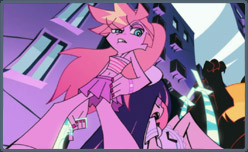 God where do I start…lets go with characters first. Every single character is just….WOW. And there is a whole lotta amazing naming sense going on here. Panty is one hell of an amazingly strong character with an amusing tendency to curse like hell (three cheers for gratuitous random english cussing!) who can change her panties into a gun to kill Ghost’s. Her little sister Stocking – a sugar loving goth girl with a secret penchant for tentacles and things that fall on the err….more kinky side of the ero spectrum. These two usually get along about as well as aaaah…the Xmen and Magneto. A truce can be reached if necessary but more often than not, these two love to argue given how different they are. Then there’s Garterbelt. Poor guy’s been given the duty to look after these two nut jobs and is forever yelling at them to a. stop whoring around and b. stop eating all that sugar and c. get their asses in shape and be serious about their jobs. Chuck is…well..Chuck. And then there’s our boombastically sexy villians – Scanty and Kneesocks. Demon sisters who are the angel’s arch enemies and are very adamant about their ruuuuuuurrrrrzzzz (‘rules’ with their accent).

Its one HELL of an amazing character cast, in a nutshell. Every character has his/her own quirks and i think the best part is that, very get some amazing character episodes in this show. We have episodes in which we see that what we’ve been shown before, thats not all there is to the characters. They have a deeper side to them and that adds real depth to the characters. You stop thinking of them as simple 2D characters after those episodes and start seeing them as people who have had issues and are trying to deal with them as best they can. Course those moments are short and in between some amazingly cracky stuff. This show LITERALLY has a Mind Screw. You’ll know when you see it. 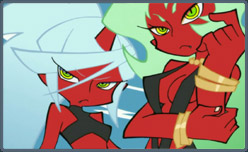 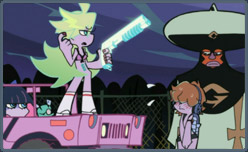 The parodies…oh. my. LORD the PARODIES! First off, the whole series is one MAJOR parody of the whole magical girl shows. Then you start down the list of all the movies and stuff they’ve done shout out’s too and or made fun off. Transformers, Back to the Future, Alfred Hitchcock, Scarface, Monty Python, Sex and the City, Fight Club, Pulp Fiction, High School Musical, The Mummy, The Living Dead series, Ghost (yes THAT Ghost), Romeo+Juliet, Phoenix Wright and I’m leaving out a few names. Its kinda like Gainax was trying to see “Hey lets see how many references we can stick in one show and see if the watchers can catch em all”. THAT and I think they were trying to test the limits of just how far they could push things with the censors XD ALL. THAT. CUSSING. “Yew fadda fuckah!”

Most kick ass OST of the season? You betcher bottom dollar it was! Every song on the OST is pure and fantabulous win! And I dont even like techno that much! But I’ve been listening to ‘Corset’s Theme’ and ‘See Through’ on repeat SINCE the day the OST came out! *pouts* How come the evil villians get the best tracks on the OST anyways? I found myself liking “Theme for Scanty and Kneesocks” more than “Fly Away” and those are near blasphemous words! There isn’t a single track on the OST that I didn’t like. “Chocolat” sounded just like I imagined chocolate would (if that makes sense…), “Fly Away” makes me wanna get up and start dancing, “Cherryboy Riot” & “Corset’s Theme” make me think that I’m in a nightclub. “Juice” and “Pantscada” remind me that yep, I’m listening to Panty and Stocking’s OST. “D City Rock” AND its music video are AMAZING. Try to name all the references they make in JUST those 4 minutes and i’ll tip my hat to your musical prowness) Its just one HELL of an amazing job on the music side. 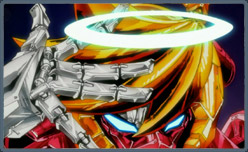 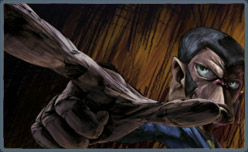 As I said before, the art style is so very reminisce of the golden days of Cartoon Network that for the first few episodes you have some slight whiplash. I know I did….it took a bit of time to get used to the fact that “No its not a kid’s show no matter HOW american cartoon style the art is”. Once I got used to it, I was looking forward to seeing just how much further they were gonna push the boundary every week. The SFX style. LOVED IT. There is nothing more amusing than seeing the sfx floating around the screen. My favorite one had to be when Panty was channel surfing and we can hear moaning and stuff and…well..just keep an eye on the sfx that floats up XD The transformation scenes. The first time I saw it, by GOD I WAS BLOWN AWAY. Its like they suddenly cranked the meter up to 11! The suddenly sharp and oh SO very ANIME art. The sex appeal that was practically dripping off the screen…the shiney of it all….I forgot to even pay attention if there was anything being SAID at that point. THAT hit me when I was re-watching it the fifth time ^^;;;.

Now GO and watch this series IMMEDIATELY! And yes, while the first episode is about poop, just hang in there. It gets better as we go along. If you liked FLCL, you will dig this too. If you like the works that Gainax has put out before, then its a must watch on your list. If you want a show that will have you rolling around laughing, again this is up your alley. If you’ve got a good, perverted sense of humor, by GOD WHAT are you waiting for? Go and watch it now now now! And then sit down and wait for season 2, which I hear has been greenlit (Well it had to be given that typical cracky Gainax ending)