Legend of the Legendary Heroes Review

Light Novel Adaptions have become a popularly growing trend in the Anime Industry. More often than not, Light Novels provide rich, lush and exceedingly deep worlds that translate exceedingly well into Anime. Of course, a very common misstep with a Light Novel adaption is that it fails to complete the rather epic tale presented in its source material. The Legend of Legendary Heroes is an Anime Series is very akin to said trend, and while it presents a very unique and interesting fantasy world, filled with exceedingly memorable characters, it is intended as more of a prequel to a larger story. 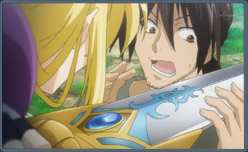 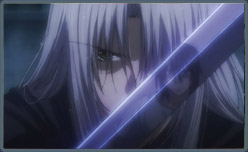 The story tells the tale of three characters, Ryner Lute, Sion Astal and Ferris. Sion Astal is the newly crowned king of a country called Roland,  and sends Ferris and Ryner out on a quest to find the relics of the Legendary Heroes of old, in order to try and bring to peace to the exceedingly chaotic Kingdom that he has been entrusted. What starts off as a very cliché adventure at first, picks up momentum and adds some major twists, transforming itself from a feeble mouse to a mammoth of a Dragon. It is in this very aspect that one notes the first issue of with  the series, the pacing.

Like any story taken from a novel, Legend of Legendary Heroes has an epic tale to tell, and it takes its sweet time getting there. The first half of the series is far from exemplary, bordering on an average, but gives you enough tidbits of information to keep you interested. This first half serves as an introduction to the characters, their relations with one another and introduces the magical world that the series takes place in. It is in this segment, that most impatient people may find their exit.

It is indeed a tragedy, because after its somewhat slow but necessary introduction, The series suddenly explodes into a roller coaster ride. From the mid-point of the series, the story takes a turn for not only the better, but for the stellar and amazing. The characters are faced with circumstances that highlight their depth and strength of character. The story twists and turns, with motivations revealed, conspiracies unfolding and riveting mysteries being introduced. It is at this very point that the viewer is gripping the edge of their seat, as things head to what feels like the mid-way point of the story, or even the real “beginning”. It is at this time that the ending comes in… Something that is quite disappointing. 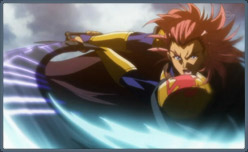 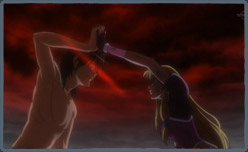 While The series ends at a very unfortunate time, just as things are getting interesting. It is hard to fault the Anime production team though, as the Legend of the Legendary Heroes novel series is intended as a prequel to the “Dai Densetsu” (Great Heroes) series of novels. In many ways, things are just getting started as the series wraps itself up, setting a new status quo for the world, where the kingdoms of Roland and Gastark go to war, and our heroic duo of Ryner and Ferris head out on another quest that may or may not lead to the salvation of the world.

This issue, the ending, or perhaps the episode length, is the most jarring and painful element of the series, and one that may be hard to forgive. While the slow start is understandable, if only because the characters, social political situation of the world and many other pieces that need to be carefully set into place before things can get interesting, the abrupt ending is hard to swallow.

What makes the ending so hard to swallow, beyond the interesting story, is the exceedingly memorable and interesting characters. The Legend of Legendary heroes features a cast of very interesting and deep characters. The characters, while definitely shallow and basic at first, slowly begin to show a great deal of depth as the series goes, and grow on the viewer like some of the best anime series to date. Ryner seems like an easy-going, powerful but useless guy at first, only to become a determined and admirable hero. Ferris starts off as a rather annoying, arrogant bully, but eventually ends up being a rather complex character that attempts to conceals her vulnerability and ends up being co-dependent on Ryner. Sion evolves from the beloved and admirable leader, to a helpless man faced with an impossible task, and breaking under the weight of it. The main characters definitely very interesting because of how believably and naturally they evolve and mature over the course of the series, and these are just the main characters. True to the title of “novel” the world of Legend of Legendary Heroes features a host of supporting characters and villains each with their own motivations, pasts and stories that fit nicely into the complex web of threads that the series weaves. 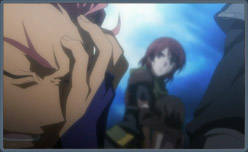 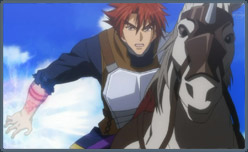 The Art direction for the series is nothing exceptional, but that’s not say its horrible either. The Legend of Legendary heroes plays it safe, and goes for the typical fantasy anime feel to its artwork, character designs and environments. The result, is a world that, while not very jaw  dropping, is more believable and immersive because of the history presented from the story.

The Animation for the series, on the other hand, tries to walk the fine line between quality and “budgeting” and fails miserably at times, falling flat on its face. The animation for the series is generally pretty solid except for a few of the later episodes before the finale, where the animation quality is so horrible its jarring and shocking to even fathom how it was allowed to happen. Rough spots aside, much like the art direction, the animation gets the job done, and is even impressive at times.

In contrast to the visual aspects, the audio bits of the series are definitely spectacularly above average . There is a very memorable OST, and definitely some great OP and ED themes. Particularly the second OP theme, “Last Inferno”, performed by Korean Rock band  Cuei, is quite memorable. There is also a particularly memorable inset song in the second last episode. To further seal the deal is some excellent voice work from A grade seiyuu, even including Anime Industry veteran Jun Fukuyama (known for his role as Lelouch, Code Geass). All in all, the audio production is definitely the strongest aspect that the show has going for itself. 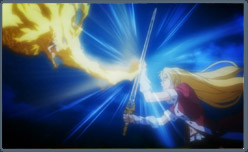 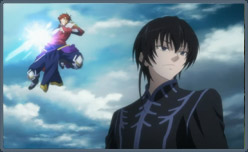 Long story short, Legend of the Legendary Heroes is a difficult series to recommend despite how good it is. It definitely has its moments, and the story and characters will definitely garner many fans. Considering how long it takes to really get into an exciting stride and how unsatisfying the ending is though, its possible that many will have issues with it.

At the end of it all, your opinion and enjoyment of the series will largely depend on what you’re willing to forgive in light of the better parts. If you love a very well thought out world, with great mythology, very interesting characters and a deep, original plot, then Legend of the Legendary Heroes will serve you well. If you can’t stomach incomplete endings, or slow starts, then the series isn’t for you. We award The Legend of Legendary heroes with a B+.