High School of the Dead Review

High School of the Dead was the Summer 2010’s answer to boredom, a God send in a drought of quality anime titles, and a hearkening back to the good old days of extreme gore and nudity that anime was famous  for in the 1990s. Based off the Manga written by Daisuke Satō and illustrated by Shōji Satō, High School of the Dead is, quite surprisingly, the first Anime to cover the topic of a post apocalyptic world ridden with zombies. Adding in the unique twist of having High School students as the survivors, and having a very Japanese flare to the storytelling and characters, High School of the Dead is one of the more overdue ideas coming to life in the Anime Industry. 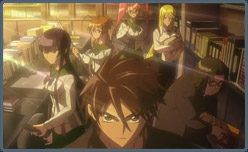 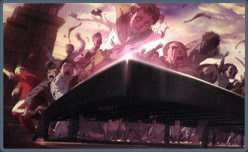 High School of the Dead tells the tale of a Takashi Kumuro and his friends from high school, as they become survivors in a world infested with zombies, and where chaos and anarchy prevail. There is no law, and the despair brought by the impending end of  civilization brings out the worst in people, who aim to only survive and make it to the next sunrise. You’ve heard the story numerous times in Live Action movies, Video games and what not, but it’s definitely a first to see this subject matter being covered in anime. Thankfully, while HOTD takes comes cues from other media and stories, it largely delivers a very Japanese and Anime-esque experience.

Added to the Zombie Apocolypse are the traditional anime elements of teen romance, drama, panty shots, boob jiggle, martial arts and crazy characters. While High School of the dead is definitely an interesting and unique show, its a not a show for everyone. Its doubtful, in fact, that most people will even look twice at HOTD after its initial episodes, because High School of the Dead is riddled with often times pointless and excessive fan service. Its obvious that the fanservice, that borders on silly and perverted, is not to be taken seriously, and that is a big thing that many viewers will not be able to get past. There are a lot of aspects of High School of the Dead that are silly and nonsensical, designed to be taken lightheartedly, and for anyone can find the ability to take those things, High School of the Dead will become an immensely entertaining experience. 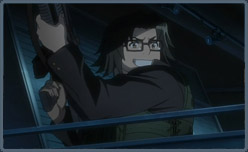 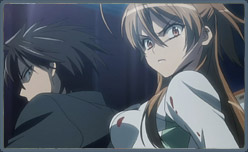 Underneath the heavy fanservice, and intense action, is a story that very accurately represents the horror and destruction and the ugly side of humans when a crisis is on upon them. There’s a good story here, and while the pacing is at a snail’s pace, it helps add a good amount of depth and a real sense of time to the show. It really does feel like a long, nightmare turned real, and through the slow and careful pacing, HOTD has a very interesting tale to tell, even if it only covers events from about 3 days into the story.

High School of the Dead has a decent story, lots of fanservice, and action, but the thing that will seal the deal for many viewers is the cast of characters. High School of the Dead has a very interesting cast of characters, some of which are definitely very unforgettable and likeable. Takashi, as a main character, is definitely the sort of guy that many girls will fall far, and who many guys will look upto, as he definitely has the qualities of a chivalrous hero and a dependable leader. Saeko Busujima, likewise, is one of the most interesting and multi-layered female characters to come out in some time. Females in anime are generally either really nice, really strong and arrogant or just very annoying. Saeko, definitely manages to become a strong, independent woman without being annoying or without being a man hater. Hirano is definitely the third character that viewers will really like, as he provides the shows most epic comedic, badass and otaku moments.

There are also the cliche characters like the tsundere Takagi, or the selfish old love interest Rei, but even these classic character archtypes are used in a brilliant way, adding to the brilliance of the shows more interesting characters. Viewers will also find a very detestable villain in Shido, one of the teachers of Takashi’s high school. High School of the Dead may not have a cast of characters that will all be loved, but it definitely has some deep and interesting characters that will move you to either hate or love them. 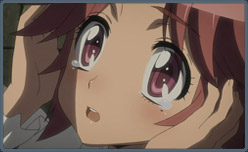 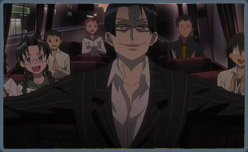 Of course, while the story and characters for this series are definitely noteworthy, that doesn’t mean its perfect. Perhaps the most problematic of flaws in the show, is the ending. High School of the Dead is based off a manga that is still ongoing and on a hiatus, and thus the series gets the “open ended, to be continued ending” treatment. Its rather sad, but the series really does end on a very low note, which is more of a whimper than anything else. Given that the show is just 13 episodes long, it will end fast and leave you wanting more, a lot more.  Fans definitely hope for a second season, but if not, HOTD is a series that starts with a bang, and keeps adding more explosions with each consecutive episode, until it hits the end, where things just abruptly stop. For those that do stick with the series, this is a real cruel punishment that’s hard to forgive.

On a more positive note, however, the production for the series is top notch, as is expected of any project that Madhouse takes on. The animation and art are very well done, with some really jaw dropping (and some really hilarious) action scenes, that definitely scream “summer blockbuster”. The zombie designs and environment designs really help bring the zombie infested world to life. HOTD also uses color tints very cleverly, and adds some great looking still shots and freeze frames to emphasize key moments. The Art direction, cinematography and choreography for the series are very well done.

The Sound is just as great, with a truly memorable OST and some great voice acting to bring the experience to a very enthralling and immersive level. Each episode has its own ED theme, and the variety and consistent quality of these ED themes is exceptional. The voice acting is also on the level that’s expected from a Madhouse production, and if not were the hard work put in by the Seiyuus, the characters in this series wouldn’t be half as impressive. 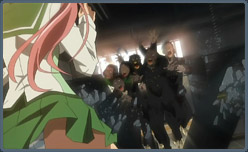 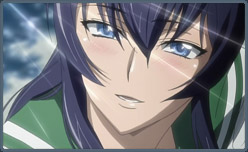 All in all, HOTD is a very odd and unique show. Its probably not going in anyone’s all time favorite lists, and will have a lot of haters, but for those with an open mind and a tolerance for its excessive fanservice, HOTD is a rollercoaster ride of zombie action. Don’t take it too seriously, and the series will definitely delight and surprise. We give HOTD a zombie-tastic B+ grade.