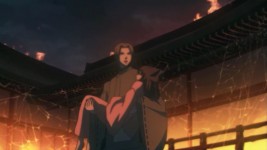 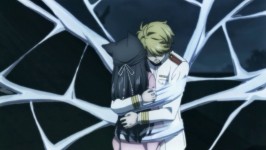 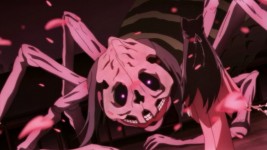 I’ve been dying to see how this series ends, but at the same time I’m sad that it’s ending.  Either way, it was a good episode and I’m happy about that.  As I’m sure most of you know, we left off with Omodake grabbing Zakuro and running towards his burning village, shouting about how the ritual hasn’t been completed yet.  Byakuroku then defects (kind of) and has Zakuro’s friends follow her back to the village.  However, she stops and asks them how they can be sure she isn’t tricking them and leading them somewhere else but everyone unanimously agrees that they believe her.  Bonbori and Hozuki mention that they understand the bond between sisters and they know that Byakuroku would do anything for DaiDai.  Relieved that they trust her, Byakuroku continues leading the group towards the village.  Here, we see Omodake carrying an unconscious Zakuro and staring in horror at the burning remains of his home; spiderwebs are everywhere and many of his servants are strung up to the rafters, mummified.  Then we hear Rangui in her demonic voice singing the song that Bonbori and Hozuki usually sing, and let me just say that it’s some creepy shit.  I never thought that such a pretty yet ominous song could sound so…twisted.

Shortly after Omodake arrives, so does Byakuroku and the rest of the group.  They stare in horror for a minute before Byakuroku shouts for her sister and takes off into the burning village.  As she stumbles through the halls, she throws open a door only to find DaiDai in Rangui’s huge, gaping mouth.  Rangui laughs and spits her out, saying that DaiDai was never good for anything, so she thought she might be good for a meal but it turns out she didn’t taste very good.  Byakuroku rushes to her sister and the two share a heartfelt moment where DaiDai admits that she’s always been jealous of Byakuroku, but Byakuroku tells her that she would do anything for her.  Unfortunately, DaiDai passes away and Rangui – being the psycho bitch that she is – asks them if they’re done with their cliched little drama before turning her attention on Omodake.

Here, she admits that she still loves him and always will no matter how much he kicks her aside and batters her ego.  Omodake, who is thoroughly not amused by this, summons some of his little fox spirit friends, but they’re quickly disposed of by Rangui.  Just as he’s about to become a meal, Omodake is saved by Amegaki.  Wait…WHAT?!  I thought they were enemies and now they’re protecting each other?!  What the hell?  Well…okay then.  Regardless of how mind-boggling this turn of events are, Amegaki tells Omodake that he always defends his superior and how Zakuro would want him to.  This sends Rangui into a frenzy reminiscent of Jan Brady, but instead of shouting “Marcia, Marcia, Marcia!” in a whiny voice, she shouts “Zakuro, Zakuro, Zakuro!”  Then, stomping around, she continues channeling her inner Jan Brady and goes to kill the still unconscious Zakuro, but Amegaki dives in to protect her.  Of course, this now means that both of them are captured in Rangui’s spiderwebs and hoisted up to the sky.

The girls then launch into action, trying to distract Rangui from hurting Zakuro and Amegaki, but to no avail.  Zakuro, although still in a trance, is apparently aware of her friend’s emotions and how hard they’re fighting for her.  We then see a small flashback to when Zakuro is with her mother, saying all she needs is her mom and Kushimatsu and she’ll be happy.  Her mother tells her that she’ll eventually make lots of friends and they’ll all become equally as important to her.  Here, Amegaki confesses his love to Zakuro and this appears to snap her out of her trance, because she tells him that he should wait to tell her that until after they’ve wrapped everything up.  She then frees them of their bindings and rips the necklace off, releasing her full power.  I have to admit, I was a little disappointed, but I digress.  The moon turns a crimson red, casting red shadows on everything and persimmon petals begin falling and Zakuro quickly slays Rangui. 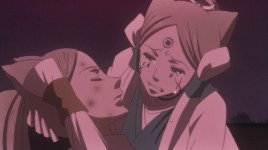 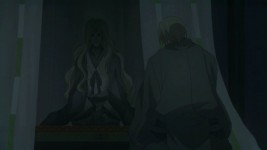 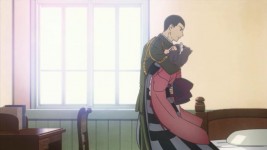 Afterwards, the building starts collapsing and Omodake runs off in search of his mother, only to find that she’s now mummified and not quite so pretty looking.  Zakuro follows him, shocked by their mother’s appearance, but Byakuroku reveals that Zakuro and Omodake were the only ones able to see her in the form they did.  Amegaki says that it’s probably because their mother’s spirit wanted them to see her as she was so that it would appear that she was still watching over them.  Zakuro then calls for Omodake to follow her, but he refuses, saying he’d rather spend the last few moments of his life with his mother.  Exasperated, Zakuro leaves him alone and flees the building with everyone else.  However, Byakuroku – who is carrying DaiDai’s body on her back – decide to stay with Omodake despite him giving her her freedom.  And so, another heartfelt moment was shared between the two as their bodies perished along with the burning building.

Okay, not really.  But before I get into that, first we find out that the Spirit Affairs has been disbanded since the government no longer feels a need to continue their partnership.  The girls are visibly upset, Bonbori and Hozuki running off and causing Ganryuu to follow them.  Fast forward what I’m sure is a few hours and we see Susukihotaru packing Riken’s things, despite him telling her that she doesn’t have to.  She starts to cry, saying that his yukata is so big and as Riken goes to pull her into a hug, she tells him not to touch her since she’s not sure if she wants to know how he feels.  He hugs her anyway, telling her that it’s not goodbye, only farewell and that he’ll see her again.  Damn those two and their effortless romantic moments!  They always make me want to cry! ;A;  We then see Ganryuu calling for Bonbori and Hozuki to come out and he then sees them in a tree, refusing to come out because that means they’ll have to say goodbye.  He finally coaxes them down and tells them that he’ll come back for them.  When they ask whether he means Bonbori or Hozuki, he grins and says “both of you.”  They then perform a pinky swear, saying that Ganryuu will come back for them.

Then, we get the farewell I’ve been dying to see; Zakuro and Amegaki.  They’re sitting on the porch, chatting about how Zakuro always thought Amegaki was weak and scared all the time.  Amegaki is visibly upset about this and Zakuro admits that she was scared too, but had to “man up” because of Amegaki.  Using his bishie powers of manipulation, Amegaki makes Zakuro feel guilty for all the times she’s teased him but then follows it up with another confession.  Flustered, Zakuro yells at him before covering her ears and confessing that she’s fallen in love with him too.  Amegaki asks her why she’s covering her ears and then says that his father will eventually understand and that she shouldn’t try to hide who she is.  And then…A KISS! 8’D  Too bad they didn’t show the actual kiss.  Damn them!  Anywho, the boys are off and we seen a montage of the girls walking down the street, visiting shrines and I noticed that the humans aren’t scared or looking at them funny anymore, which is wonderful!  We also get a brief glimpse at Omodake and Byakuroku!  See, I told you they didn’t really die.  As it seems all ends well for every-

Oh wait.  The story isn’t over yet.  Apparently the boys put up a fight to reinstate the Spirit Affairs, so now everyone is back together!  Of course, the two children spirits start asking Amegaki for a kiss because they saw him kissing Zakuro and all hell breaks loose.  Ahh…young love. 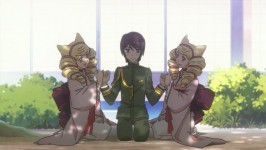 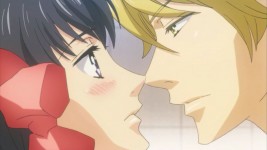 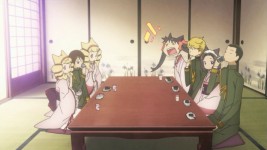 Opinions: For a finale episode, it wasn’t a bad episode but it definitely could have been a lot better too.  The fact that Omodake, after fighting so hard to get Zakuro into his clutches, gives her up so easily makes my brain hurt.  Not only that, but I was a bit disappointed by Zakuro’s lack of…awesome-ness once she unleashes her full powers.  I thought that maybe her sword would have become a bit larger and/or more menacing or possibly some slightly more demonic features.  But no.  Just a red moon, a creepy speech and persimmon flowers.  All in all, it was a good wrap-up and they tied up all of the loose ends quite nicely in terms of the relationships between the couples.  Although I’m still curious about whether Omodake will try to reinstate the Village of Oracles or not.