The World God Only Knows 11 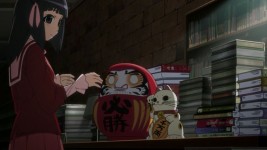 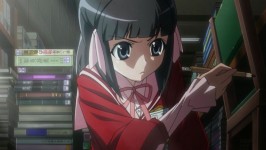 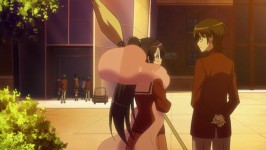 We finally reach the end of this conquest, which I’m thankful for, but it’s also kind of saddening since I have a feeling the series will be over soon.  The episode starts off with Shiori in a market, looking at different figurines that are supposed to bring someone good luck.  She notices a sign saying “smaller sizes are available; please ask employee for assistance” and just as she’s about to call out to the only employee she sees, someone else grabs their attention first, leaving Shiori alone.  However, instead of looking for someone else for help, she settles for the large idol and heads towards the school library.  She sets up her idol as well as a few other statues and a tree that she’s strung her wishes on (much like you would do at the Tanabata festival) before she sets about finding the books that need to be disposed of to make room for the media room.  However, instead of putting them aside for disposal, she makes them into a barricade around the librarian’s desk!  She then sets to work making a sign, looking rather determined.  Once she’s gotten everything set up, she sits at her desk, hoping for the best.

Early that morning, Keima and Elcie go to stop by the library only to find the library club pounding on the door, shouting for Shiori to open up.  Turns out Shiori not only barricaded herself in the library, but she reset the password!  We then get to see the note she wrote; it basically says that she’s opposed to the media room.  The president is furious and while she’s pounding on the door, we see Shiori reach for some ear plugs to try and drown out the shouting.  She then starts worrying about whether or not they’ll get a teacher, but she then scolds herself for getting scared.  Meanwhile, Elcie and Keima arrive on the roof of the library and Elcie gets started on drilling a hole through the roof so that Keima can get to Shiori.  We then get a little flashback to when she was in elementary school and getting scolded by a teacher for breaking a vase.  She’s unable to find the courage to tell the teacher what really happened and as a result, is late to her music class.  She stands outside the door, debating how to enter the classroom, but decides to wait until the music stops so that she doesn’t interrupt them.  The music doesn’t stop and feeling dejected, Shiori finds her way to the library.  Judging by her reaction, this is where she first falls in love with libraries. 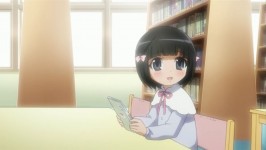 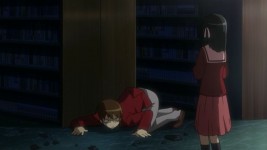 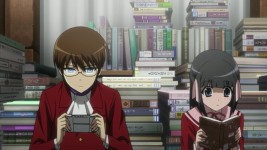 Later that day, as night begins to set in, Shiori hears a thud and goes to investigate.  She finds Keima sitting on a bookshelf, declaring that he would hate to see such a quiet, peaceful place go away and so he’s supporting her.  Startled, but touched by his actions, she leads him to her fort, apologizing for how small it is.  Keima waves off her concerns and starts playing his PFP, leaving Shiori to her thoughts.  She then starts worrying about whether or not Keima will initiate a conversation but then she gets irritated that he’s being rude and not talking to her.  As a result of being uncomfortable, she ends up accidentally saying that she’s worried that no one will listen to her if she doesn’t talk.  Keima pauses in his gaming to say something, but suddenly the power goes off!  Outside, we see the rest of the club shutting off the power via the fuse box and resetting the password so that they can get inside.

For some odd reason, the library starts shaking, causing the massive towers of books to fall on top of Keima and Shiori, effectively burying them.  Shiori then reveals that she would like to just live in a library for the rest of her life and not have to deal with people.  Keima tells her that she’s lying because he knows that she desperately wants to be able to speak to people like a normal person.  He gets up, leaving Shiori to be buried in the massive pile of books.  She then feels as though all of the books in the library are falling on top of her, limiting her ability to reach other people with her voice.  Just as she’s about to give up, a light breaks through and Keima pulls her out of her despair, telling her that he’ll give her all the courage she needs to make her voice heard.  Cue him kissing her and Elcie effortlessly capturing the loose spirit.

The next morning, the club enters the library the next morning to see Shiori apologizing for her behavior the previous day.  She then goes on to say that she’s upset about having to dispose of so many books and the president agrees to having another discussion of what to do with them.  Shiori then takes a swig of her green tea, but blushes suddenly, feeling as though someone else had had a drink of it.  I guess that despite the fact that they aren’t supposed to remember anything about the conquest or falling in love, the girls still retain some sort of memory of Keima.  Anywho, the conquest is over and now Keima can go back to his gaming. 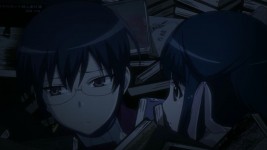 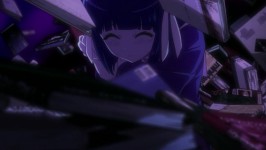 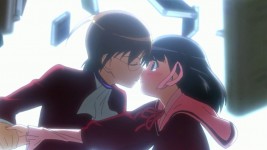 Opinions: Again, I thought this was a pretty boring episode, but thankfully it wasn’t as bad as last week’s.  I’m glad that Shiori finally found her voice and is able to express her opinions to other people without stammering.  However, I’m also so happy that this conquest is over because now we can move on to better things.