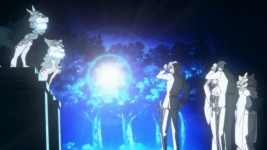 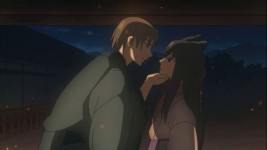 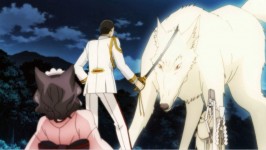 As astounding as this is, this show keeps getting better and better with every episode.  I was on the edge of my seat, inwardly screaming at the characters (because apparently that always helps, much like telling someone not to open a door during a horror movie) and left wanting more.  As I’m sure you all know, last week we left off with Zakuro being brought to the wedding ceremony – if you can call it that – by Byakuroku and Amegaki & Co. were on their way to visit Lords A and Um in order to get into the Village of Oracles.  The episode starts off with the group pleading with A and Um to let them into the village, despite the dangers they’re bound to face.  The spirits finally give in and send them on their way, afterwards commenting on a strange presence they felt.  They shrug it off, seeing as it wasn’t a harmful presence, and continue worry about the group as well as Zakuro.  The group arrives on the very cliff that Tsukuhane used to go to in order to look at the Village from a distance.  Just as they’re about to get ready to set off in search of Zakuro, Susukihotaru notices that Amegaki is missing! D:  Maybe this is what that presence A and Um felt?

Either way, we find Amegaki in a courtyard – most likely of the Village’s main building – and he starts shouting for his comrades (although I don’t think that’s such a good thing, considering he’s in enemy territory.)  Off in the distance, he hears someone crying so he goes to investigate and finds himself face-to-face with Tsukuhane, who begs Amegaki to deliver her feelings to Zakuro and Omodake.  Meanwhile, the wedding ceremony is going on and just as Omodake is about to seal their union with a kiss, he’s interrupted by the group, sans Amegaki.  Furious with the interruption, he sends his henchmen to attack them while he and Byakuroku flee to “that accursed spot.”  Unable to stop them, the gang is confronted with two fox spirits that are being controlled by their human masters.  As they continue to try defending themselves, Susukihotaru is able to hear their thoughts; the spirits are begging them to kill them so that they cannot be used to create more half-spirit children.  She relays this information to the group, but since the girls are hesitant to do anything since the spirits were not to blame, Riken steps up to the plate.  Instead of slaying the spirits, he instead defeats their masters, resulting in their bond over the spirits being broken.

Meanwhile, Omodake, Byakuroku and Zakuro – who is still unconscious/in a trance – arrive at the lakeside, the very place that Tsukuhane shared her first kiss with Enaga.  Omodake reveals that this is the place where he saw his mother with Enaga, which apparently caused him to develop some sort of mother complex.  He then orders Byakuroku to disrobe Zakuro since he apparently is unable to do it himself and he comments on how fair and untainted Zakuro’s skin is.  Just as he’s about to kiss her and likely screw her brains out (here I started shouting “DATE RAPE! DATE RAPE!” to no avail) Amegaki shows up and puts a stop to it!  Phew!  Thank God for good timing!  Omodake has Byakuroku go after Amegaki and after a brief but fierce battle, she overpowers him.  However, before she can revel in her victory, the rest of the group shows up as backup! 😀 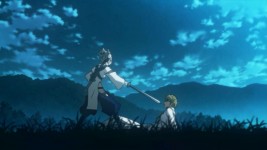 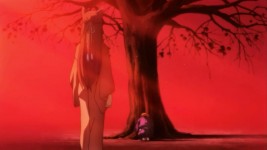 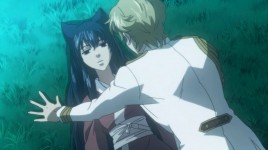 As the group fights valiantly against Byakuroku, Omodake joins the fight, using those weird little slips of paper to summon fox-snake spirit things.  At least, that’s what they looked like to me.  While all of this is going on, Zakuro is lying on the ground and we get a brief glimpse at what she’s seeing in her mind and/or dreams.  She’s standing in front of the persimmon tree again, where a bunch of the male half-spirits are and some quiet sobbing is heard.  As she approaches them, apologizing for being scared before, they dissipate, revealing a young Omodake crying in front of the tree.  Odd…  However, while all of this is going on, Ganryuu loses his sword and just as it’s about to impale Zakuro, Amegaki makes a flying leap and grabs her, saving her from being injured.  He then notices that she’s still wearing the locket her mother gave her and just as he’s about to rip it off, freeing her true powers, he stops.  Omodake demands to know why he didn’t release her power and Amegaki tells him that it’s because Tsukuhane wanted Zakuro to be able to live a normal life.

Shocked by this, Omodake mutters something like “you were able to hear her thoughts” and Amegaki says that when he first arrived, he was drawn to Tsukuhane’s room, where she shared her thoughts and feelings with him.  Not only did she want Zakuro to live a normal life, but she was also devastated about leaving Omodake in the care of his father.  Visibly distraught by this, Omodake reveals that as a child he pined for his mother, often asking his father if he could see her.  One day he managed to escape the Village and saw her on the lakeside and excited to see her, nearly ran out of the woods but was stopped by seeing her share a kiss with Enaga.  Enraged and heartbroken, Omodake returned home and told his father of what he witnessed, spurring on the results we now know.  He then goes on to say that even though Tsukuhane returned to him, she refused to produce more half-spirit children and even refused to eat, choosing death over cooperation.  Omodake seemed to be devastated by the loss of his mother, but he quickly covers his emotions by launching another attack on Amegaki.

However, his attack is interrupted by some screaming coming from the village below.  In his absence, Rangui has set DaiDai around the village, setting fire to everything and releasing all of the half-spirits.  DaiDai approaches Rangui after her assignment is complete and Rangui comments on how much she loves DaiDai and how she has no more use for her sister.  DaiDai is thrilled and agrees to do anything that Rangui wants, although we don’t hear what the demon asks of her.  Omodake panics, shouting about how the ceremony isn’t complete yet before grabbing Zakuro and sprinting off into the woods.  Byakuroku stops Amegaki from following him and after a brief conversation, she agrees to help them on one condition; they have to help rescue Omodake from his haunted past.  As the group sets off, we see Omodake carrying Zakuro through the woods, a single tear rolling down her cheek. 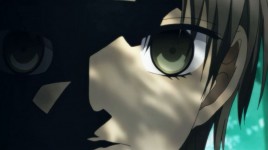 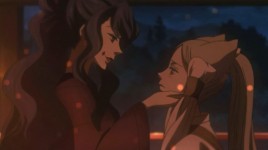 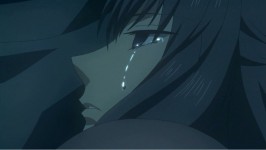 Opinions: DDDD8  BEST. EPISODE. EVER.  The angst, the drama, the action; everything was perfect!  Granted I still think that Omodake is kinda gross for wanting to impregnate his half sister, but I think he’s only doing it because his mother – WHO HE ALSO TRIED TO HAVE SEX WITH – is dead, leaving Zakuro as the only other alternative.  This episode definitely set it up for an amazing finale episode (yes, next week is the last one ;____; ) and I’m super excited to see how things turn out.