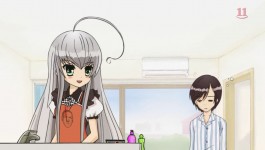 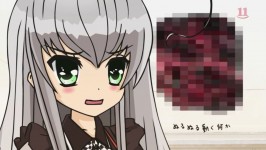 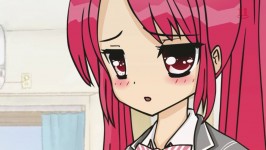 Haiyoru! Nyaru-ani is quite possibly one of the weirdest shows I’ve ever seen.  It supposedly revolves around Nyaruko, a shapeless demon who can change its shape to whatever it desires; in this case, it’s an ordinary-looking girl with silver hair.  In the real world, I’d question how ordinary silver hair really is, but since it’s anime I’ll go with it.  There’s also Mahiro, an ordinary human, who apparently is saved by Nyaruko one night after he is chased by aliens (I’m going off of the summary on Moetron.com so don’t ask me.)  However, none of this is apparent in the first episode.

Not only is Haiyoru! only a 4-minute episode, but it’s all done using Adobe Flash.  Considering this, the animation is pretty smooth and not choppy at all, unlike the stuff I’ve created during my forays into the unknown territory that is Flash.  However, on the other hand, it leaves a lot to be desired.  As the episode starts off, we find Mahiro stumbling into the kitchen, looking a tad sleepy and finding Nyaruko hard at work cooking him breakfast.  Nyaruko comments on how they should be showing some skin since it’s expected (according to her, the show is an adaptation of some light-novel and the viewers who are familiar with it will be expecting it) but Mahiro vehemently refuses.  Shortly after their debate, in walks a girl with pink hair who seems to have flames holding her hair up.  I’m assuming she’s another demon, but she encourages Mahiro to start stripping.

Ignoring the pink-haired girl’s requests (I still don’t know who she is) Nyaruko gives Mahiro his breakfast, saying she got up bright and early to make it just for him.  Even with Flash animation, it looks freaking amazing.  Mahiro comments that it actually looks like a proper breakfast for once and as Nyaruko is about to feed him a sausage, this random ass dragon shows up and eats it.  The dragon is then on the ground, panting like it’s become sexually aroused.  Mahiro shouts at Nyaruko, demanding to know what she put in his food, but then we see the pink-haired girl hanging onto a girl with black hair in a kimono and – wait.  Where the hell did this other chick come from?! D:  I’m so confused!  And…that’s it.  That’s all that happened.  The episode itself was a whopping 2 minutes while the opening/ending credits were another 2 minutes.  Somehow, I feel like I’ve been jipped. 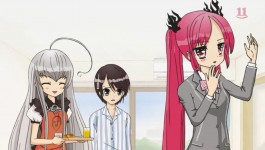 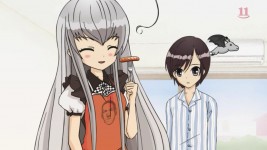 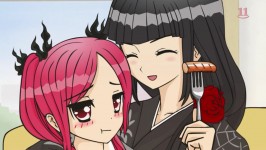 Opinions: As I stated before, the Flash animation, while smooth and not choppy at all, leaves a lot to be desired especially after seeing the opening/ending credits, which was in your typical anime animation style.  I see no sort of plot as of yet, I’m terribly confused as to who all of these people are and why they’re all living together.  Especially the two girls who came in at the end of the episode.  I don’t even have a name for them!  I’m hoping this is just a teaser/preview of what’s to come, but if the rest of the series is like this, I can’t say that I’ll be enjoying it too much.