The World God Only Knows 10 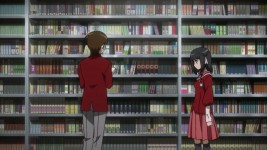 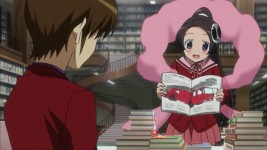 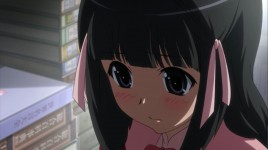 As much as I hate to admit it, it seems like my first impressions of this new love conquest was correct: it’s boring.  Incredibly so.  Shiori, despite being cute and all kinds of adorably shy, is driving me nuts.  Keima, on the other hand, makes me laugh at how mean he’s being to her (I know, I’m a horrible person and should be shot.)  Anyway, on to the review!  We start off where we left off last week with Shiori trying to thank Keima, but saying “thankonomics” instead.  She tries to escape after her blunder, but is halted when she hears Keima say that books are a waste of space and should be digitalized.  This upsets Shiori and cue the internal monologue!  She goes on and on about how books are superior to a computer screen and nothing can replace the excitement of turning the page of a good book.  Admittedly, I agree with her on this point.  Reading something on a computer can be fun, but I’d much rather curl up with a good book and a cup of tea.  Call me a dork if you must, but that’s my opinion on the matter.  Because of her anger, Shiori calls Keima an idiot before flushing and fleeing back to her desk.

Elcie scolds Keima for being so mean to Shiori, saying that books have their merits and not everything needs to be digital.  Keima rationalizes his behavior by saying that he has to be mean to her in order to get her to show her inner dialogue to her.  I’m not sure exactly how that works, but whatever works for you Keima.  He then notices Elcie flipping through some books and she proudly shows him the books that Shiori found her on fire trucks.  Oh Elcie, you’re so adorable~  Meanwhile, Shiori is scolding herself for her behavior towards Keima and how she could call him an idiot, but she couldn’t properly thank him.  I swear to God, I just want to shake this girl.  She’s so introverted it’s not even funny!  We then hear her go on and on – internally, of course – about how everyone thinks she’s slow and kind of weird because she doesn’t talk much.  After a series of flashbacks, in which we see her in her childhood being teased by the boys and unable to say anything and then in middle school when she’s unable to tell two girls in her class that the book they’re holding up is her favorite one.  Instead, she writes them a 100-page review on it, which subsequently creeps them out.  During her revelations, she decides that staying in the “world of books” is better because she can be herself. 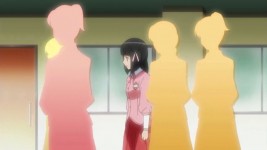 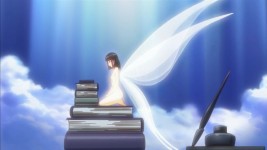 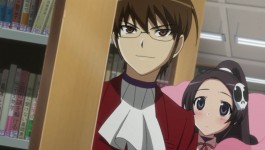 The following day, Keima and Elcie are in the library once again and overhear the library council’s meeting.  Apparently a media room has just been approved by the school’s council and now the students will be able to check out DVDs and CDs.  Shiori is devastated by this, but everyone else is excited about the new addition.  She stands up to say something, but can’t find the words, so the president of the club adjourns the meeting, leaving Shiori hanging.  As she makes her way back to her desk, she passes by Elcie and Keima, who is writing in a library book.  Furious, Shiori snatches it from his hands and glares at him, unable to find the right words.  Elcie notices her flipping through the book and scolds Keima for writing in a book, but Keima waves her off, stating that the timeline for the book he has is wrong (I think it goes without saying that the book is on video games) and he’s merely correcting it so that the students have the proper information.  He then goes on to say that if books were digital, it would be much easier to remedy issues like this, which pisses Shiori off and she calls him stupid.  As she stomps off, Elcie comments on how Keima’s not opposed to making girls mad anymore, but he says that when she’s mad, he can hear her inner dialogue.

The next day, Keima is in the library again, this time writing in his own book, but Shiori sees him and assumes that it’s another library book so she swoops in and snatches it away.  She finally gets the nerve to tell him that library books are for everyone and he shouldn’t be writing in them.  He tells her that it’s his own book and he would like it back, and Shiori is thoroughly embarrassed by this development.  She then apologizes (internally) before accidentally saying outloud that once the media room is built, there will be more and more people like him coming in and ruining her library.  Keima comments that her inner and external dialogue are mixed up and she becomes rather flustered before telling him he’s not allowed back in the library and running away.  It seems like Keima’s finally starting to get through to her.

Again, the next day, Keima is in the library, playing his PFP and Shiori accidentally says her thoughts aloud, prompting Keima to say she’s talking out loud again.  Embarrassed, she comes over to where he’s sitting and sits across the table from him.  Keima comments that it’s so quiet in the library and she says something about the walls of paper from the books keeping the noise from the outside world away.  They then exchange names and she quickly excuses herself to her desk, internally scolding herself for telling him her name (like he doesn’t already know it!)  Elcie and Keima meet up and Elcie comments on how they’re close to conquering the emptiness in her heart, but Keima wonders what it could be that’s causing her heart to be empty.  They then notice her shredding a piece of paper before storming off.  Curious, Elcie uses her powers to piece it back together and it turns out to be a list of books they need to dispose of to make room for the media room.  Keima then declares that he knows what to do. 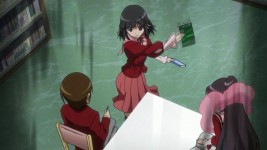 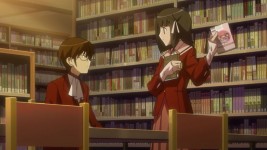 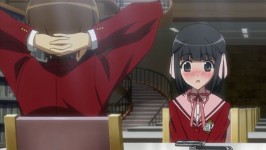 Opinions: Short review is short.  Not because I didn’t feel like making it long (which is partially the case) but because nothing super exciting happened.  It was a lot of internal dialogue on Shiori’s part and overall it was just a really slow, bland episode.  The ending piqued my curiosity a bit since I’m curious as to what Keima plans on doing, but I’m not holding my breath for a super spectacular finish to this conquest.