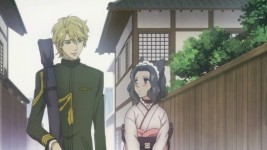 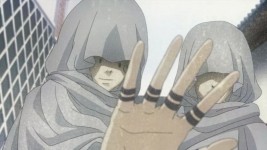 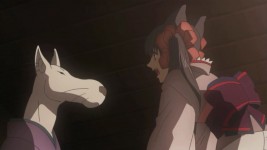 I’m excited to say that this week, the plot thickens and we also get to see a side of Zakuro and Amegaki that we’ve never seen before!  Needless to say, my inner fangirl was squealing at the Zakuro/Amegaki interactions. :3

SO!  We join the crew this week to find them cleaning around the Ministry; Zakuro and Ganryuu are dusting shelves (with Zakuro standing on Ganryuu’s back as if he were a stepping stool) while Riken, Bonbori and Hozuki are attaching a shelf to the wall.  Nothing super exciting happens, but when Ganryuu starts complaining that Zakuro should have gotten Riken or Amegaki to help her instead of him, she comments that Amegaki had gone into town to run a few errands.  Skip over to the local town and we find Amegaki and Susukihotaru walking down the street together, chatting.  Turns out that Susukihotaru had some errands to run as well, one of them being that she had to return the sword they had taken from Oritaka’s shop (see the review for episode 4 if you’re not sure what I’m talking about.)  She mentions Mugi, the adorable little spirit that Oritaka takes care of and Amegaki visibly stiffens, so Susukihotaru placates him by saying that Mugi is harmless and quite cute.

This is where things become intense.  Just as the duo is about to step inside the small shop, someone calls out to them.  They turn to face the person, who happens to be the mysterious cloaked figures from before, only to have some sort of magic dust/powder thrown in their faces.  While I’m sure their eyes are probably irritated as hell because of it, they pass out, dropping their items.  The cloaked figures grab Amegaki and Susukihotaru and run off with them.  Surprisingly (or rather, not so surprisingly), no one does anything about it!  Some neighborhood watch committee they have.

Heading back to the Ministry, we find Riken searching out Zakuro, both of them worried about how long Amegaki and Susukihotaru have been gone.  Some shouting grabs their attention and they find Oritaka being dragged down the hallway by Mitsuogi (at least, I’m assuming it’s her.  They all look alike to me…)  She recognizes Riken instantly and runs up to him, Mugi on her shoulders, informing him that something might be wrong with Amegaki and Susukihotaru (during this exchange, Zakuro is both amazed and dejected by how large Oritaka’s breasts are in comparison to her own, which I thought was hilarious.)  After presenting the duo’s abandoned packages, Zakuro rushes to Kushimatsu’s office, Riken, Ganryuu and the twins in tow.  An argument between Kushimatsu and Zakuro ensues over whether Zakuro would be allowed to go in search of her friends or not.  Fed up with Zakuro ignoring orders, Kushimatsu orders Zakuro to be locked up in a room so that she cannot go in search of them and put herself in danger.  Trying to ignore Zakuro’s pleas to be let out, Kushimatsu runs into Lord Amaryoju, who tells him to let Zakuro out so that she can fight her own battles.  Kushimatsu protests, saying that she’s doing this because she promised to protect Zakuro by any means neccessary, but Amaryoju threatens to lock her up in Zakuro’s place if she doesn’t obey his orders.  Hmm…  Very interesting… 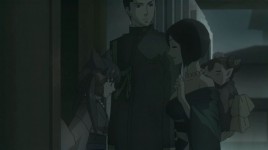 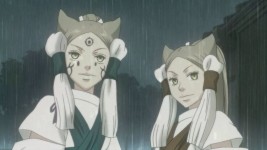 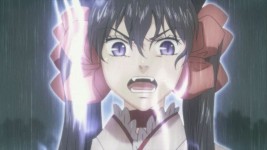 We find Amegaki and Susukihotaru waking up in a cellar, all alone and in the dark.  Both of them are unsure as to where they are exactly and are startled when the door opens to reveal the cloaked figures.  Their captors tell them that they are to stay put, seeing as they’re just bait meant to lure Zakuro out of hiding.  Amegaki is understandably confused until Susukihotaru comments that she saw them once before at the military gala.  Unfortunately, there isn’t much they can do except hope that Zakuro won’t come for them (which we all know won’t happen.)  Meanwhile at the Ministry, Riken and Oritaka are springing Zakuro from “jail” so that they can sneak off to rescue their partners.  Oritaka stays behind, but wishes them luck as they make their way across the fields and into the town.

Sometime later, Zakuro and Riken stumble across the small building where Amegaki and Susukihotaru are being held captive, likely thanks to Zakuro’s keen ability to sense her friends.  Eager to rescue them, they forge ahead but are stopped by…who else?  The cloaked figures!  After a brief conversation, we finally get a look at their faces to see what or who they really are.  My mouth dropped when their cloaks came off; they’re half-spirits just like Zakuro! D:  This is definitely an interesting development!  A fight ensues and Zakuro is quickly overpowered because she’s so shocked by the fact that they’re half-spirits as well.  The now not-so-mysterious figures claim that they hate her for living her happy life with loved ones, and that they’re happy to take all of that away from her.  They then reveal that they’ve rerouted the downpour the town is currently experiencing so that it fills the cellar that Amegaki and Susukihotaru are being held in.  Enraged, Zakuro recovers and defeats her opponent (I might add that she had a strange, blue aura surrounding her as well.)  Just as she’s about to finish her off, the Black Widow from before reappears and rescues the two half-spirits, leaving Zakuro stunned for a moment before rushing off with Riken to save her friends.  Thankfully, they make it in the nick of time and are able to save them just as the cellar bursts and fills with water.

After returning to the Ministry with their friends in tow, Zakuro is scolded by Kushimatsu for ignoring the orders she was given, but relents because she’s simply glad nothing happened to her.  The group warms up in the bath and as they’re exiting, Amegaki asks Zakuro if he could talk to her alone for a moment.  After beating around the bush for a bit, he hands her the package he had gone into town for earlier.  Zakuro knows what it is – one of the treats he had promised to buy her for going to his parent’s house with him – and yells at him for being so careless.  She turns to head back to her room, but Amegaki stops her and pulls her into a hug.  Cue my cute-o-meter breaking again. :3

Meanwhile, we see the two foes from earlier being treated for injuries by the Black Widow.  They admit that Zakuro is much stronger than they are and the Black Widow tells the eldest of the two (the one with the tattoos) that if she doesn’t continue serving her, she’ll murder the girl’s younger sister.  I sense something important plot-wise just around the corner. 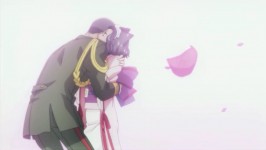 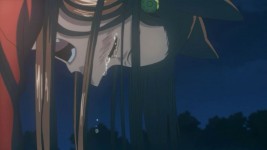 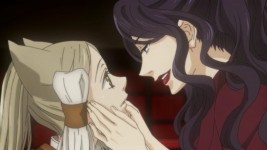 Opinions: Yet again, I’m amazed by the animation, voice acting and plot of this episode.  I was on the edge of my seat, biting my nails because I was anxious that Zakuro wouldn’t make it in time and Amegaki and Susukihotaru may be harmed or worse.  I had a feeling that the cloaked figures were half-spirits as well, but now that that has been confirmed, I’m curious as to why they’re serving the Black Widow.  And why can’t the eldest use her powers for long periods of time outside of their village?  Where is this village anyway?  Who did Kushimatsu promise in terms of protecting Zakuro?  Gah, so many questions! DX  I’m hoping that they’re all answered soon, and I’m dying for the next episode to come out.