Great and high memorable anime series can originate from a variety of things. Some come as adaptions of manga, some from light novels, from games or even from an original concept altogether. What is exceedingly rare, is finding a great, deep, and dark show that originates from a trading card game. 2006’s Kiba, is that exceedingly rare gem of a show that is tied into a trading card game. 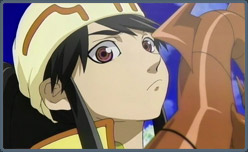 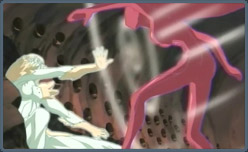 Unlike most shows of the genre, Kiba director Hiroshi Kōjina stated that “(the series) absolutely will not have any plot elements that curry favor to children”. Added to that the producers also mentioned that “that Kiba will not be the type of show to put “human drama” on the back burner while concentrating on promotional tie-ins”. With words like that  from the creative team and a studio like Madhouse handling the animation, Kiba managed to become what perhaps no anime of its type could, something that could be taken seriously for its story rather than the trading cards game that it was based on. The real issue is how it compares to other shounen-action-fantasy shows. In terms of squarely looking at Kiba as an anime series, it does quite a few things right, more so than it does wrong.

The story for the series follows a white haired 15 year old teenager, Zed. Zed, frustrated with his life in the desolate, dark and quiet world of “Calm” wants desperately to leave and be free. One day, with the appearance of a mysterious green winged being, Zed is transported to another world as he follows it into a portal. Zed arrives in the country of Tempura, where he encounters Shard casters, people who can use magic to fight and summon beings called Spirits. Zed finds out that he too is a Shard Caster, and that the being that he followed into this world is a spirit as well. As Zed struggles to become stronger, the world around him begins to change as mysteries are revealed about the world, and his own destiny.

While it doesn’t make a great first impression, what is perhaps Kiba’s most strong element, is its plot and story. The story, is what will keep you watching the series even if nearly everything else in it feels unoriginal and uninspired. The story makes expert use of its characters, putting them into interesting situations and always bringing about some unexpected but extremely interesting circumstances. The story for this show will keep one interested till the very end of the series.

The idea behind Kiba isn’t very original actually, as its a cliche “I have power and a destiny that could shake the world itself” concept, but the take and approach to the subject matter is quite original. The origins of the spirits, Zed’s destiny, and the workings of the world where the series takes place in, are very intriguing and original. In many ways, Kiba doesn’t do what you expect a typical shounen, fantasy show to do, much like how it doesn’t do what you expect a trading card tie-in series to do. Characters die in this series, and meet unfortunate and often times sad and cruel fates.

Kiba is a dark series, that doesn’t shy away from killing off its characters, or putting them through some very cruel events, but it doesn’t go completely  overboard either. This delicate balance of a dark, moody story and doing the unexpected is largely what makes Kiba stand out as an action-fantasy series. 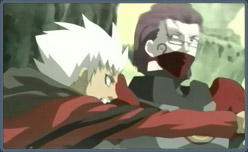 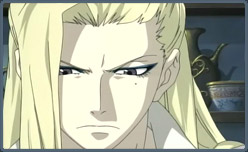 Of course, while Kiba’s story and plot are rated highly, another unexpected and rare thing is that the characters are highly unoriginal and very forgettable. Zed is your typical, rash, arrogant and angry main character. Much of the other characters are also common arch types in this kind of series. You have the typical best friend that goes down a dark path because he doesn’t have the same good fortune as the main character. You have the strong girl that eventually has the main character surpass her, falls for him and is a bit of a tsundere. You have the typical pretty boy who’s a flirt and rich and has the whole “nobel” aura about him e.t.c. The characters are really nothing to write home about, and it seems that in general, Kiba is much more concerned with making its plot shocking and interesting rather than giving its characters any real depth or originality. Some characters, totally go off the deep end and become totally different people, all in an attempt to shock the viewer. Granted, the shock works, and  the premise is interesting enough to generate excitement, but the character’s core is more or less destroyed in the process. In the end, while the characters aren’t all that impressive, they’re not horrible either, and Kiba’s story makes it kind of hard to notice anyway.

A few issues though, with this series that do stick out are in its main character and the story’s conclusion. Zed isn’t exactly the most likable main character you’ll ever see. Zed is always moody, and he loses quite a lot in the series. Its not exactly common for the main character to always lose at crucial moments, only to get up and  try again, but it does seem to disappoint at times. In fact, one major problem with Zed is the fact that he never grows or matures or changes throughout the series, even if other characters around him do. All the way up to the last episode, Zed doesn’t change how he acts or thinks all that much, which does leave a lot to be desired.

Speaking of the last episode, another disappointing thing about the series is the open-ended finish. Its not exactly horrible, as mostly all of the series plot threads are resolved, but the ending still doesn’t give us a definite conclusion to the story. In fact, the ending ends on such a cool note, that it feels more like the best is yet to come. Alas, Kiba isn’t a manga adaption, so the story is left to end the way it ends, which isn’t very satisfactory even if it isn’t totally horrible either.

From the production side of things, as of writing Kiba is a 4 year old animated work, and it does show. Kiba’s presentation is kind of like it’s characters. It’s okay, but it’s not all that impressive either. It’s more of a rough, bumpy road as far as the art direction goes. Some of the character designs are rather unique and cool, like Zed’s character design or some of the key spirits in the series. Others, like a lot of the designs for the supporting characters and regular spirits seem very uninspired. In fact, a lot of the spirit designs will remind you of more child oriented shows like Pokemon or Digimon. This is really regretful, because Kiba has a dark story, with dark themes and lots of angst and some nice philosophical ideas on power and what it means to seek it.

Where the presentation really does suffer from, is the world where Kiba takes place. There’s just too much of a jumbled mess of different types of areas and backgrounds which really get in the way of cohesion and unity in the vision of the world that the viewer is supposed to be engrossed with.

The animation is pretty good, and while there’s nothing really jaw dropping or mesmerizing (Even though it’s a Madhouse animation), it gets the job done, and admirably at that. There are lots of dynamic angles, and the  still frames during fights do add a nice effect. The special effects do seem a bit dated though, although probably more so because anime today just have far better special effects than they did 4 years ago.

The sound work is pretty good. Again, there’s nothing very memorable in here, but it’s of a good level and one that doesn’t hamper or lessen the viewing experience. The opening and ending themes are a mix of hit and miss. The background music is meager in this series, but it does feel to contribute to the atmosphere of the series, perhaps a bit more so than the art direction. The voice work is also good but not exceptionally great. Every character does have a nice distinct voice that matches with their personality, and the seiyuu do a good job of injecting some depth to some otherwise shallow characters. 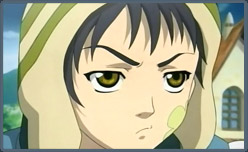 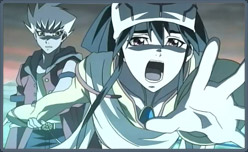 At the end of  it all, Kiba is a series that will surprise you if you go into it with low expectations and give it a chance beyond the initial few episodes. The story will keep you entertained and interested till the end, and while Kiba isn’t a perfect show, the few strengths that it does have outshine the faults. We award Kiba with a B Grade.