InuYasha Kanetsu-hen (Final Chapter) is the sequel and conclusion to the 4 year long running anime series, InuYasha (2000-2004). Airing 5 years after the original 167 episode series aired and left fans hanging with an incomplete ending, Kanetsu-hen was intended to cover the last 20 or so volumes of the manga and show the conclusion to the epically long story. With the same production staff and seiyuu joining together to bring the final parts of the long story, with only 26 episodes at their disposal, one wonders if InuYasha Kanketsu-hen is a worthy finish to a very memorable and fan favorite series. 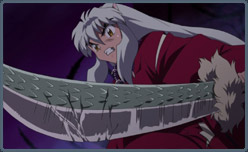 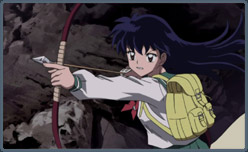 To anyone who has seen the original 167 episode series, the immediate answer to the question is a yes. InuYasha Kanketsu-hen is the time where the viewer finally gets their payoffs for watching the original series and getting attached to the characters. In the first two episodes alone, major characters die and events start to take a turn towards the final stages of the enigmatic battle between InuYasha and Naraku. This second series wraps up the story completely, with a solid and happy ending, one that will definitely give series fans some much needed closure.

At the same time, the series is far from perfect and there are a number of flaws that bring it down, much like its predecessor. The original series’ problem was that it was too long and too slow in advancing its tale. Kanketsu-hen falls into a problem that is the exact opposite, its pacing is a bit too fast. Since Kanketsu-hen has only 26 episodes to tell 20 volumes worth of story, there’s a lot of cutting corners and fast movement, so much so that even someone who’s not read the manga will notice an uncomfortably fast speed at which the events of the story unfold. The bare-essentials are definitely there, and its not like the important moments get quickly passed over. In fact, unlike its previous series, the series is packed with emotional moments, with some where anyone attached to the characters will definitely shed a tear or two. The big problem of no one dying or facing their end is dealt with in this series, and it definitely feels like no one except perhaps InuYasha himself are safe from a grim and sad fate.

The fact that there are so many emotionally charged moments jam packed into this 26 episode series, is something that makes it feel much more dark and grim than its previous incarnation. There’s little comedy or light hearted moments present in this series, as its all about a desperate struggle for InuYasha and his friends as they race to try and defeat Naraku, who gains some very significant ground in his evil plans. This stark change of atmosphere, will definitely hit past fans, who remember InuYasha as a light hearted series full of comedy, with albeit some serious themes and a touching story. Kanketsu-hen feels like its lost some of the charm and some of the heart that made the original series so warm and fuzzy. 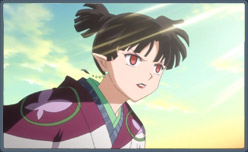 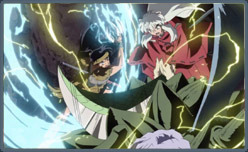 In terms of charm, a lot of the characters don’t have a lot of time to shine or prove themselves. Considering how many characters the series starts with, It quickly begins disposing of some of them at a rapid rate, before things settle down and we’re left with our final team of heroes and villains. This causes a lot of the immense character development that was present in the original series, to vanish. The side characters of the series definitely get the short end of the stick. Character development is still there for the major characters like InuYasha, Kagome, Miroku, Sango and Sesshomaru get a decent amount of development, but even that amount feels a bit shallow when compared to the great depth that the original series had.

One thing that does trump the previous series is the production for this show in terms of art and animation. Kanketsu-hen is a show animated in glorious HD, and everything from the battles to the attack animations are beautiful. Animation is rarely if ever recycled in this series, and all the characters definitely stay true to the original character designs and to their original feel. The feudal fantasy world of InuYasha too, in fact maintains the spirit and core of the original series but takes it a step farther with more detailed and lush environments, areas and backgrounds.

Another thing that seems to lack a lot, is the fact that the voice acting done by the seiyuus doesn’t feel as exceptional or great as we’ve come to expect from the industry at this point. Its hard to say if its better or worse than the original series, but it definitely feels like there isn’t that extra layer of depth in the voices that add character to characters. Miroku and Sango suffer the most in this series, as they don’t get a lot of dialogues where  the more quirky and defining parts of their personality show. Its just odd to see Miroku be so series and not act like the pervert he is, and its definitely strange to see almost all the Tsundere element from Sango’s personality vanish. Even Kagome and InuYasha seem to feel a bit fake and less deep like they used to feel in the original series. 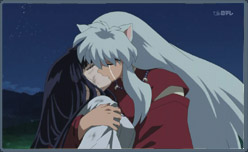 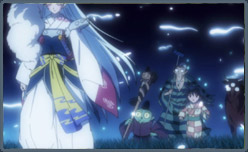 With all the nitpicking done in this review, its a given that one is thinking that this series isn’t really all that great, and that’s not true. InuYasha Kanketsu-hen is a good series, and a decent conclusion to an extremely long story, but its a bit too short and fast paced for its own good . It’s also about 5 years too late of an ending, and its got a legendary series to compete with, with an obviously smaller budget and episode length. Fans of the original series will watch and enjoy this series, and definitely find extreme pleasure in the revelations and reveals of the series. Anyone thinking of picking up the original anime series and then watching this series should take a pass though, and just pick up the 500 chapter long manga. We award InuYasha Kanketsu-hen with a B+.