Every once in a while, you’ll find yourself watching a show that’s so unique, different and extremely good at what it does that you can’t help but be amazed at the creativity involved in it. The Winter 2009 anime series Durarara!! is definitely one of those shows. It’s safe to say, there’s nothing like it in the current anime landscape, and it’s a real rare gem in a time where we get so much of the same moe blob (Lucky Star/K-On! clones) or fan service (Ikkitousen, Kanokon e.t.c) shows coming at us in packs. 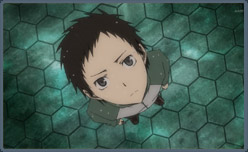 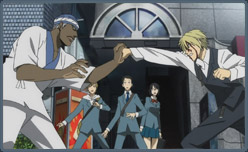 Durarara!! is actually another series based off a light novel series written by Ryohgo Narita, the  first being the stellar and equally unique Baccano. Its also animated by the same studio that did Baccano! and for anyone  who’s seen said underrated series, this  can only mean great things. While many will try to find similarities and attempt to compare Baccano and Durarara!!, it’s really not quite fair to do so. Durarara!! is its own person, and in some ways, it’s even better than Baccano! and will resonate with audiences more.

Durarara is a show that does something that a lot of movies have been doing for a while, it goes for multiple stories that all intertwine and cross paths, all the while keeping a larger story in the mix for the very unique universe it creates. Durarara is set in a fictional version of Tokyo’s downtown district of Ikebukuro. It is in this district of Tokyo, that a number of odd and interesting people reside, include a Dullahan (Irish headless fairy) who rides a bike and works as a courier, the internet gang the Dollars, the superhumanly strong Heiwajima Shizou, The Sushi Shop promoter Simon, and even just seemingly regular high school friends Anri, Kida and  Mikado.

What is perhaps Durarara!! greatest strength is in its story, plot and how its paced and revealed throughout the series. Durarara!! is a light novel adaption, and thus the focus is on a very memorable and deep story that has so many shocks, twists and turns that it continues to impress and build up till it ends, making you hungry for more. The story is a good combination of modern Japanese tech culture, with the inclusion of cell phones, the internet, chatroom and even internet gangs but there’s also a good dose of fantasy and the supernatural in terms of Irish mythology, with the whole Dullahan concept playing a key role in the entire series. 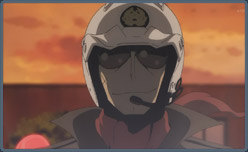 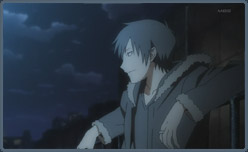 The plot is masterful, and the main story is built up through little mini arcs, that are about 2-3 episodes in length at most. Each little story builds up to the overall picture. What makes an already stellar story all the more impressive, is the way in which its told. Durarara!! employs some of the most impressive story telling techniques of any given medium and keeps its pacing just right. It never really feels too fast, nor  does it feel to slow. Add to that, unlike many other story heavy shows, Durarara!! isn’t a tease. In fact, Durarara!! presents some mysteries, unravels them, adds new mysteries and repeats the process till the end of the series. Durarara!! doesn’t pull any punches either, and instead of keeping its cards hidden and holding back, the series goes all out in every arc and moment. All of these elements, make for a very gripping and entertaining story with a unique flavor that can’t be found in any other TV show to date.

It’s easy to just recommend Durarara!! for its amazing story alone but what’s just as impressive, if not more so, is the epic cast of characters. Durarara!! really feels grand and epic in scale because it juggles a large amount of characters, and does it so well and so believably without sacrificing character development for any of its characters, that it makes it quite the feast for anyone who’s a fan of shows with strong characters. Every character in this show, is bound strike some manner of a chord with viewers, and almost all of them are very memorable. Even the somewhat seemingly useless characters slowly end up being rather amazing and entertaining, if in their own ways. In fact, half the reason the story is able to be so amazing is that it centers around its characters and their relationships and motivations. 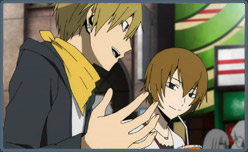 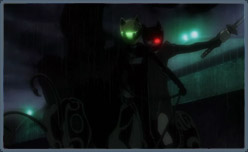 Granted, Durarara!! has an engaging story and some very interesting characters, but like all anime, the presentation is what really determines if something is “a nice idea” or ” a great animated series”. Fortunately, the production for Durarara!! is just as impressive as the story and characters. Indeed, Brains base and Ryohgo Narita are a match made in heaven.

The Art for example, is rather unique and simplistic but charming art style. More importantly, it maintains the spirit of the artwork of the Light novels. The backgrounds are gorgeously done and very detailed, making this fictional incarnation of Ikebukuro very believable and real. The use of color in this series is also very clever and imaginative, as it often grays out surrounding people in large crowds to focus on its central characters.

The animation is just as impressive, with some rather jaw dropping moments throughout the series. Everything from the series big moments, to the Opening Intros are exceptionally well done. Everything from the masterful choreography, to the use of dynamic angles and perspectives really helps bring the action to another level.

Added to the visual splendor of this show, is the impressive sound work that is a feast for the ears. The music is this series is perfectly in tune with how impressive everything else is. The series has some very memorable background music tracks and some of the best Opening and Ending themes seen to date, ones that you’ll be listening to long after you finish watching this 24 episode  series. The voice work is also what you’d expect from a high profile Anime series, with talented seiyuu such as Jun Fukuyama, Hiroshi Kamiya, Miyuki Sawashiro and many others. 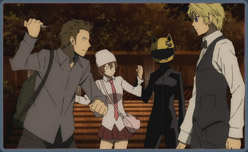 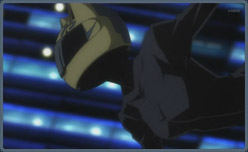 In conclusion, its easy to recommend Durarara!! to anyone really. It’s a very unique and innovative show that does so much right that one really wishes there were more shows of this level every season. The engaging story, memorable characters and strong production make this a show that no Anime fan should miss. We sincerely hope that the rest of the Light Novels are animated for this amazing Franchise, and we award Durarara!! with a Grade of A+.